This review contains spoilers. If you haven’t yet seen this movie, read the book, or read spoilers anywhere else, then go ahead and skip it.

I was 11 years old when “Harry Potter and the Sorcerer’s Stone” first hit bookshelves in America. My mother brought them home from the library where she worked one day. My brother and I read them together. We were addicts from page one. It’s 14 years later, and I still pull out one of the seven novels when I have nothing else on tap to read, sprinting through the text that now feels like an old friend.

In many ways my fandom doesn’t influence the way I feel about the last installment of the Potter film franchise, and in many ways it does. “Harry Potter and the Deathly Hallows” happens to be my least favorite book, and most of what I dislike about the movie are simply faithful adaptations of things I disliked about the novel.

There’s always a lot of discussion whether the director of an adaptation of a popular book “got it right”- a phrase which truly makes no sense when you think about it. What is getting it right? Making sure everyone’s favorite part is included? Correct casting? Correct production design? The best most adaptations can hope for is that they manage to invite everyone to come see the movie while not inspiring murderous rage among the fans. Walking the tightrope between the two is difficult, and in something as virulently loved as this it’s well nigh impossible.

This movie perhaps had the hardest time of all. Encompassing the latter half of “Deathly Hallows”, it’s essentially a part of a part of a story, which also has the responsibility of bringing everything together into one grand finale- basically an extended curtain call. Director David Yates, who’s helmed the last 4 movies, is occasionally awkward or ill-paced in his execution, but his misty views of the United Kingdom and minimalistic camera work generates an oerwhelming sense of unease and loneliness. His movies deftly navigate Rowling’s roving text between fantasy, horror, prep school drama, and, in this case, an epic war story. 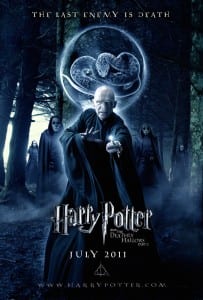 The film doesn’t stop for breath at the start before launching into what is really two massive action sequences. The first is a daring magical heist into Gringotts, a wizard bank run by a bunch of sarcastic goblins, for a Horcrux our magical trio needs to destroy (too long to to explain, just keep reading). The heist scene is truly wonderful, featuring a goblin’s mine ride, an abused, atrophied dragon, and pretty damn good explosion at the end. Helena Bonham Carter steals the beginning of the scene by performing a neat and hilarious trick by turning herself into the sociopath Bellatrix Lestrange- who is actually Hermione Granger (Emma Watson) imitating Bellatrix Lestrange.

The second sequence is the final battle at Hogwarts school. It’s less organized than the heist scene, but far more emotionally-charged. The siege on Hogwarts castle and ensuing violence evokes nothing less than the early days of World War II. We see the march of Nazi Germany into Paris, underground tunnels, pirate radio stations, and brave local townspeople sending supplies and information to the resistance. In the first firing of Death Eater wands, we see the blitz and the lonely, terrifying nights Londoners spent huddled in Tube stations, listening to the Devil knocking at the door. It’s no secret that Voldemort (Ralph Fiennes) is a pretty easy stand-in for Hitler- a mad and ravenous murderer who likes his followers to have pure bloodlines and has plans to dominate the world. But Yates does well keeping it from seeming trite or disrespectful.

All of the past Potter characters, both living and dead, make an appearance or two, saying the line that basically sums up their character and then either dying or surviving in a valiant manner. The resolution of Severus Snape (Alan Rickman) is both satisfying and heartbreaking. Through the years Snape has been one of the most compelling, astonishing characters in the series, and Rickman has delivered each of his lines as if it’s the last he will ever speak. The end of his story in many ways felt like the end of an era.

But while the character actors make up the color and the sparkle of the series, it’s been watching the three main characters (and the actors who play them) grow from adorable, shiny-faced children, to gawky, shaggy adolescents, to polished adults. I don’t know what they will do after the series is over- Watson is considered by most to be the most talented of the three, able to convey complex emotions without speaking a word. But Rupert Grint and Daniel Radcliffe, while a little less blessed in their acting ability, are possibly flexible enough to shed their robes and throw their wands to the wind.

The unhappy truth that the result of a seven year epic tale of good versus evil climaxes in what is basically an obscure technicality involving wand ownership. This is not the film’s fault of course, and writer Steve Kloves does his best to limit the amount of time spent on “wand law”, but it’s still an anti-climactic and kind of lazy way to end a story. And the one-on-one wand fights scenes are, I have to say, poorly translated to the screen and seem kind of lame. And the unfortunate Epilogue (featuring a dubiously-aged Harry, Ron and Hermione) would have been best left out. But despite the occasional awkwardness, or poor decisions, I have to say- Yates got it right.

So it’s over now. I realized when the lights went down, and the cape-clad people around me began to applaud, that Harry has been with me for more than half my life. It feels very much like what J.K. Rowling was trying to say when she wrote her masterwork: the pain, the joy, the fear of becoming an adult, of leaving the things that were precious to us behind, and turning towards who we are becoming. “Harry Potter” isn’t about facing down evil. It’s about facing ourselves.