When the members of San Antonio trio Girl in a Coma were discussing which songs to include on their new series of cover song EPs, they knew they wanted to focus on music that had a significant influence on their tastes. But the Smiths tune that is their namesake was never an option â€” it would have been too "cheesy," bassist Jenn Alva told Blast in a recent interview.

"I think we talked about (recording a version of ‘Girlfriend in a Coma’) years ago," said Alva, 29. "We were joking about it. In the process room, I started doing the bass line. Then we were like, no, no."

Songs by Elvis and Jeff Buckley were also tossed around, but ultimately the girls â€” Alva, and sisters Nina and Phanie Diaz, who handle lead vocal and drum duties respectively â€” decided on seven tracks from artists they grew up listening to, including hits from The Beatles ("While My Guitar Gently Weeps"), Patsy Cline ("Walkin’ After Midnight") and Joy Division ("Transmission").

"We have so many influences," Alva explained. "What we chose is kind of a collection of all of our influences, and just a wide spectrum of time periods (and) different types of music. And plus, the big thing too was, what can we take and then make it ours too? So, a lot of questions came into what we were choosing and, you know, how are we going to execute it? And we were left with these, which we’re happy about." 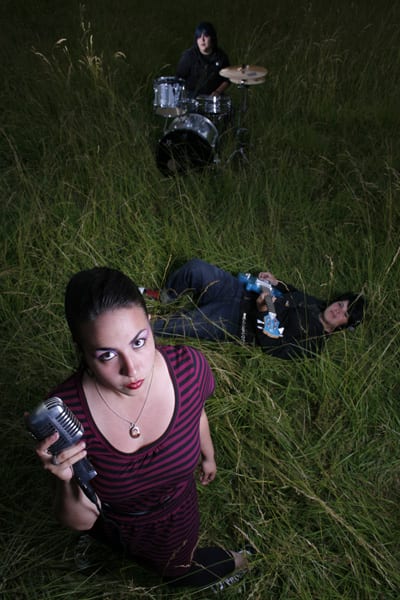 The songs appear on three EPs, collectively titled "Adventures in Coverland," whose release dates are staggered throughout the month of April. Together, the three 7" records comprise a board game â€” a concept Alva designed as the group was trying to think of ways to combat illegal file-sharing of their music. (The songs will also be available digitally.)

"It was just like, how the hell are we going to get people to buy a goddamn record, like without downloading it? What’s going to make them want to have something in their hands?," she said. "It’s really cool. It’s not, like, the funnest board game. It’s not like Monopoly. But it’s a good idea."

Girl in a Coma officially formed on Thanksgiving Day in 2000, borne out of a friendship between Alva and Phanie Diaz, who bonded over a shared love of Nirvana records and The Smiths’ "Louder Than Bombs" in junior high. They eventually recruited Phanie’s sister Nina, seven years their junior, to join as lead vocalist. But there was never any of the annoyance that one might expect from having a little sister tagging along, according to Alva.

"Phanie and I are still very much immature," she admitted. "Sometimes Nina’s a lot more mature than we are. The only time we thought about it is when we would go on tour and it’d be like, â€˜She can’t come in until she sings.’ You know, she couldn’t go into the bars and stuff. That’s the only time we’d be like, fuck."

Alva, who lives with the Diaz’s parents and Nina, says sibling rivalry hardly ever comes into play and that the vibe in the group is more like all three are related.

"We’ve known each other so long," she said. "You know, we’re all sisters. So we all fight and we make up in like 10 minutes. Like, â€˜Well, sorry. Ok. Move on.’ I think that’s one of the great benefits of us being so close is, you know, we fight but we get over it real quick."

With a diverse range of influences including Bjork, Smashing Pumpkins, Selena and â€˜90s riot grrl acts like Bikini Kill to Selena, the band has cultivated a post-punk sound over the past decade. And even though they stop short of recording cover versions of his songs, they have shared the stage with their hero, Morrissey, who invited them to be his opening act for tour dates in the U.S. and Europe in 2007.

"That was great," gushed Alva, who characterized the tour as a learning experience. "It was just perfect, because we needed to do a big tour like that and to work with somebody that, you know, has influenced us, but to treat it more like, this is a business. We (were) representing our music. We’re going to come in and see how many of his fans can like us. I mean, that’s what you do as an opening act. It was just a great experience. â€¦ Being the opening act is fun. You know, it’s good to do the big one and get the big one out of the way, so that anything else that comes, it’s like, â€˜Cool. We got it. We’ll do it.’"

Currently, the members of Girl in a Coma are in the midst of two back-to-back tours â€” first with British indie rockers The Wedding Present and then with Australian singer Sia starting next week â€” that will take them across the country and back again. After being approached by both artists, they agreed to compromise and do half of each tour, Alva said.

"We were going to do the whole tour with (The Wedding Present), and then Sia came around," Alva explained. "We met her at the Michigan Womyn’s Fest. We actually woke her up. We had a really early sound check. It’s outdoors and everybody’s camping and stuff. It’s really cool. And they wanted us to come, like, at 8 and do our sound check. So we got there â€¦ and we did our sound check and then we got offstage. And (Sia) and a friend came up to us and they’re like, â€˜Wow, that was really good. You woke us up, but we’re not really mad about it.’ â€¦ So, we kept in touch and she invited us to do her tour, so basically we asked both groups, would it be OK if (we did them both)."

Signed to Joan Jett’s Blackheart Records label, Girl in a Coma embodies the same girl power mentality of their mentor.

"I want to invite as many girls out there to start a group. I think the more we have, the better," Alva said. "I feel like a lot are popping up. â€¦ We’re meeting all-girl groups. It’s really cool. It would really be awesome if there just was this explosion. You know, you might as well."

Girl in a Coma tour dates: