How would a “chorus of stones” behave? I’m not sure, but my guess is: probably not like a troupe of shrieking acrobats. 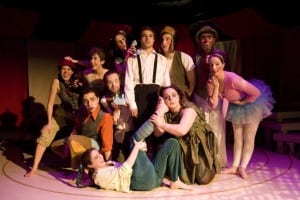 Nevertheless, if yo u like circus clowns—the traditional Barnum & Bailey type with the white face and the shiny red noses and the dopey antics—you might well like the Independent Drama Society’s staging of Eurydice, the poetic and elegant take on the Orpheus myth from the pen of Sarah Ruhl.

The legend goes that when Orpheus, the greatest musician of his age, descended to the underworld to bring his slain love Eurydice back into the land of the living, he played music so sad and so beautiful, the very stones wept to hear it. Ruhl further dramatizes these weeping stones as denizens of Hades who speak the whispered language of the dead and help enforce the underworld’s rules. At times they can be a bit bullying. Ruhl suggests “nasty children at a birthday party.”

In director Lindsay Eagle’s production, the stones are raucous, dim-witted, overblown hams, who break the fourth wall to tell the audience jokes, screech with delight at their punchlines and offer up some light tumbling and lifting for applause.

Once the frame recedes in importance a bit, this production turns on some charm. Greg Nussen wears a radiant toothy smile like a mask behind which his socially awkward Orpheus is perpetually distracted by an internal torrent of harmonics, intervals and orchestrations. It’s enough drive Annie Winneg’s high strung Eurydice to fatal distraction.

The production gets a huge boost when Adam Lauver arrives on the scene as the “Nasty Interesting Man” who turns out to be Lord of the Underworld. Lauver brings enormous charisma to this villain, maximizing his creepiness through the precise comic choices that mark a great character actor.

Time lags a bit in the underworld as Eurydice’s father (Cliff Blake) a quirky old-fashioned sort with a thin nasal voice, costumed like a vaudevillian, tries to teach her some of the lessons the dead forget, to the consternation of their clown over lookers, while Orpheus, meanwhile, composes short letters  to send down via worm.

There is no denying, however, that when Orpheus loses his Eurydice for a second and final time, the moment is absolute heart destroying. The perfect subtly of the performances maximizes this eternal, mythic tragedy. It’s almost enough to make one forget about the clowns.

Eurydice plays through April 30, at the Plaza Black Box, in the Boston Center for the Arts.