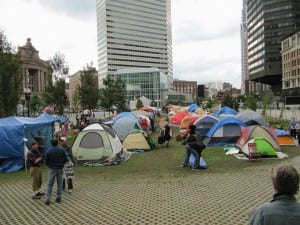 A few hundred people in Boston — 200 to 600 depending on the time of day and the weather — are illegally occupying Dewey Square Park, the portion of the Rose Kennedy Greenway directly in front of South Station. They’ve built a colorful community of about 60 tents in the shadow of the Federal Reserve Building, the skyscraper owned by Bank of America, and other symbols of financial power. During the day, they line Atlantic Ave with signs denouncing corporate greed. At night, they train each other in useful skills or gather for assembly, a sort of egalitarian legislature in which anyone can have a say and everyone gets a vote. They call what they are doing “Occupy Boston.”

It’s a diverse group with long lists of complaints about the way society is run, especially in regards to corporations and the power they yield. While members tend to be well left of center politically, most insist that what they are doing isn’t about Left or Right, Democrat or Republican. Noting the game-changing wealth the richest 1% of families have under their control, many like to call themselves “the other 99%” and insist that anyone within that same wide percentile is who they are fighting for.

Even in countries where no declared war is being fought, 2011 hasn’t been a peaceful year. The Arab Spring toppled regimes. In summer, parts of London burned. And in New York City, exactly three years after the especially sharp economic plummet of September 2008, thousands of people physically took themselves and their anger to the doors of Wall Street itself.

Who are the people “occupying” Boston and what do they want? What connection – if any – does this peaceful gathering on the Rose Kennedy Greenway have to do with the overthrow of leaders like Hosni Mubarak and Muammar Gaddafi? This is a story of Boston’s newest and smallest “neighborhood,” a small patch of dirt and grass some are calling “Occupied Boston,” and the story starts in Canada. 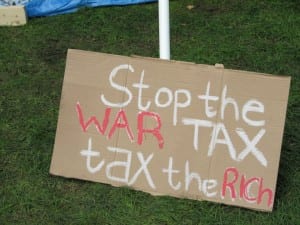 Adbusters, an anti-corporate activist group registered in British Columbia way back in 1989, has been clamoring for social change ever since. But it wasn’t until this year, in the wake of the Arab Spring, that the idea for Occupy Wall Street started to really come together. On July 4, 2011, they registered the domain name “occupywallst.org.” Nine days later, a group of hackers devoted to civil disobedience via the Internet and calling themselves Anonymous, asked its members to join the demonstrations soon to follow. After two more months of planning, Occupy Wall Street exploded into a protest of more than 1,000 people on Monday, September 17, in New York City.

On day eight of this extended protest, many of those involved headed uptown, forcing the closure of several streets. At least 80 arrests were made that day, some of them roughly, and video of a New York City police officer chemical macing a group of young women intensified world attention on the event. On day 13, in front of South Station during Friday rush hour, Boston became among the first of many cities to field its own version of that same protest. 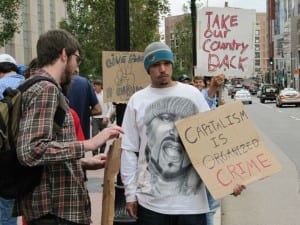 Compared to their compatriots in NYC, the men and women of Occupy Boston received a warm welcome from the city. Word came down from Mayor Menino that tents pitched outside South Station would be allowed despite lack of permits. Before hitting the streets, some Boston cops received reminders about what holds are less painful for the person being restrained. Whatever else Boston’s powers-that-be might think of the protestors and their complaints, it’s clear they wished to avoid a replay of the public relations fiasco caused by the violent arrests in NYC just two days earlier.

Folks gathered at the State House and then marched towards the Financial District. The Rude Mechanical Orchestra, a NYC marching band scheduled to be in town anyway for the HONK! Festival taking place in Cambridge and Somerville that weekend, was a conspicuous presence at the moment of Occupy Boston’s actual birth. Dressed in trademark black and green, bedecked with sequins and playing exuberantly sloppy Dixieland, they made what was happening seem more like a holiday parade that the wild-eyed images we received of Arab Spring protestors. It helped set the tenor for what was to follow.

The cops, apparently in a non-confrontational mood, seemed amused by the marching band and a few folks in costumes. As people flocked into Dewey Square Park, police and protestors exchanged nonthreatening looks and polite words. “Hello…hiya…hello…howyadoing?” Even “welcome.” According to one police officer, a 30-plus-year veteran of the Boston Police Department who spoke on condition of anonymity, “What they’re doing here? It doesn’t bother us…(but) a few people barged into the bank and were trying to get arrested. So we helped ‘em out.” At least two dozen people, largely middle aged folks who had lost their homes, were gently taken into custody.

Emerging from their workplaces, waves of people stopped to gawk at the spectacle or tap their toes to the sound of horns and drums before catching the next train home. Widely circulated estimates that this first night drew about 1,000 people don’t seem to take into account the number of individuals and groups coming and going during these first hours. Two thousand plus seems more accurate.

It almost didn’t happen. Local organizers were targeting the following Friday, October 7, to hit the streets. But planning went surprising well and consensus was reached on numerous issues earlier than expected. The Occupy Boston movement was able to mobilize on September 30 instead, the same day that local groups were showing up on Beacon Hill – each with its own specific grievances regarding housing, labor or other issues. Most left with the sunset, but a few hundred people now firmly identifying themselves with the “Occupy Movement” encamped for the first night of the protest. Even torrential downpours during the night couldn’t dampen their impression that Occupy Boston had gotten off to a very auspicious start. 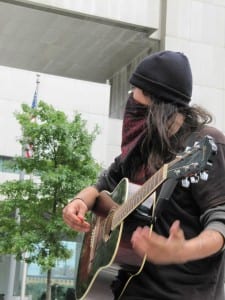 People came and went from the event throughout the weekend. By Monday, day four of the Boston protest, it looked like those in the camp were enjoying a decent level of comfort. Good planning meant that such essentials as the medical tent were in place from the start. People of various descriptions had dropped off carloads of food through the weekend, meaning a surplus had begun to be stockpiled. What had been a patch of turf was now a bustling shantytown of colorful tents in the gray shadow of America’s financial colossi. Some of its inhabitants – especially those with no roof over their heads before joining the protest – were already calling it “home.”

Teyvan Lowe, 18, was one of them. During the evening rush hour, as people held up various messages for the benefit of motorists, Lowe stood alongside them playing his guitar, dressed like a sort of bandito in a mask and stocking cap. Pulling down the bandana that covered the bottom of his face, he said “This is basically where I live. The streets.” He explained that trouble with his family and the lack of a job had given him no other choice. Lowe, who had arrived at the protest on Friday, said “I’m here mostly on behalf of the homeless population. As a community of homeless people, no one is going to take us seriously. It’s hard enough to find a job if you haven’t showered in three weeks and have dirty clothes.”

Arania Webb, 47, of Wakefield, wasn’t much better off. “I was in investment bank law. I was in the legal profession for twenty-five years. I was good at what I did. I was laid off in 2008…when our clients went under, so did we.” Since then, she’s done everything she can to survive, “temp work, housecleaning, dog-walking, you name it. People who mock the unemployed by saying ‘get off your ass and get a job?’ There are no jobs. I have zero income. I used all my savings. I had to liquidate my 401K…now I am sleeping on the floor of my friend’s home office.”

Seeing a chance to again put her professional skills to good use, Webb joined Occupy Boston’s legal team six days earlier. “Where else could I be?” she asked. She then referred to those outside the top 1% saying, “if you were in any way touched by the market crash, you are the 99 percent…if you are one illness or hospital stay away from bankruptcy, you are the 99%…this is a nationwide movement turning into a worldwide movement.”

Some at Occupy Boston found it difficult to articulate their topmost demands, while others said that capitalism itself must be forced out of existence. Webb fell into neither category, and her demands were surprisingly simple and modest: single-payer health care, FDR-esque work programs, and “some kind of campaign finance reform.” When asked how long she’d tough it outdoors, Webb said “We will stay here as long as necessary. We will stay here through the snows. We’ve started to acquire warm weather gear already. We will be here as long as it takes.”