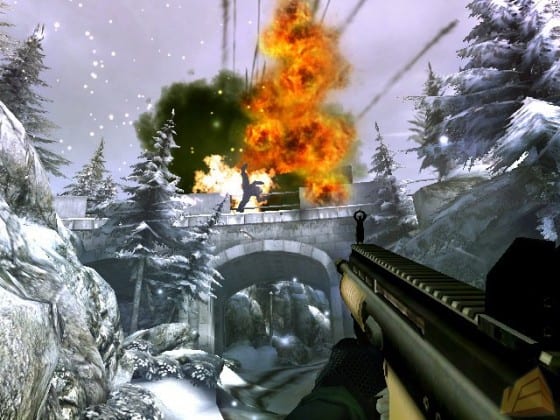 Browsing through a record store, you’re sure to notice your essentials, The Beatles, The Stones, and Clapton.

What you’ll see if you look closer though is there are multiple albums of smaller bands paying tribute to the greats – Activision’s new Goldeneye 007 title is similar to these tribute albums, it dares not to try to recreate the magic that made the original so unforgettable, but merely pays it respect.

It would be simple for Activision to slap the Goldeneye name on a subpar shooter and watch the profits roll in, but what they’ve done is much more. It may not be the Goldeneye you remember in every sense, but the development team nailed the feeling that accompanied 1996’s beloved shooter. What’s more – it’s also an extremely competent shooter filled with solid mechanics and fun additions that will keep you coming back for more.

One of the biggest changes of Activision’s Goldeneye revamp is the inclusion of current (or maybe former depending on who you ask) 007 actor Daniel Craig rather than the original’s Pierce Brosnan. While it may seem like a small change, it alters a lot more of the game than you’d think; Craig’s Bond is a much tougher, brute than Brosnan’s suave and debonair portrayal of the British spy and as a result, the entire game gets a sort of facelift in the process. There are a number of stealth missions that you’ll take on as you progress through Goldeneye, but the developers have obviously taken cues from the more modern shooters like Call of Duty and Medal of Honor. If you play through Goldeneye with a cool head, it’s possible to get through much of the game, but you may opt not to because of how impressive the game’s action sequences are.

A good portion of that satisfying gameplay comes as a result of the game’s incredibly sharp and intuitive control scheme. The safe bet for most will be using either the classic controller (Activision even released a special edition gold version to promote the controller’s use with the game) or the GameCube controller for precision and comfort, but the game controls remarkably well even with just the Wii-mote and nunchuck setup. The precision shooting is downright excellent and leads to the ability to pinpoint exactly where you’re going to shoot – be in appendage or limb.

Goldeneye’s single player campaign will last most gamers roughly around 10 hours to complete, but its longevity stretches far beyond that. Much like the original game, ratcheting up difficulty doesn’t just increase the enemy AI, it also adds new objectives – which of course means that you’re going to want to give the game multiple plays to see everything. Hardcore Bond fans are encouraged to pay attention to fine details throughout the game, as there are a few clever nods that they’re sure to appreciate.

One of the game’s shallow points though is with the story. Featuring a completely rewritten tale with a few nods to the original story, Goldeneye’s main game mode is a bit disappointing. Instead of an interesting tale deserving of the James Bond name, you get a story that’s filled with spy thriller clichés, terrible acting and unskippable cutscenes. You’ll be able to telegraph pretty much all of the plot twists from a mile away. I understand that Activision wouldn’t want to keep a more than 10-year-old story in a brand new game, but why strip away the heart the original had as well.

All of these problems aside though, Goldeneye’s legacy is built firmly on the game’s extensive and innovative multiplayer suite, and Activision has went to great lengths to ensure that the new game’s suite feels like it should. In essence, this new version of the legendary multiplayer mode feels like how the original would have felt if it had come out in the modern era. Combining a perk system made famous in games like Call of Duty and the ability to tweak options to make the game your own, the multiplayer suite is one you’re going to keep coming back to. There are a few things that are oddly missing, like Wii-Speak for the game’s online sessions – why can’t I talk to my opponents online?

Blast Factor: No, Goldeneye 007 for the Wii is not the second coming of the legendary first person shooter – but that’s not necessarily a bad thing. It’s a competent shooter, with solid mechanics that could work without the Bond license. At its heart though, is a tribute to a favorite of millions of gamers. You’re sure to love the game’s lengthy campaign along with the re-envisioned multiplayer suite. Bond may not be back, but Activision has done a great job recreating the magic.