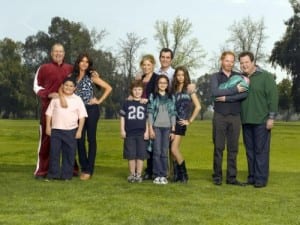 Tonight Modern Family came out firing on all cylinders and I was reminded of all the reasons I continue to love the show.  This week’s episode, Unplugged, finds Jay’s family dealing with a neighbor’s noisy dog, Phil’s family competing in an electronics-free contest, and Cam and Mitchell struggling to find a preschool for Lily to attend.  In typical Modern Family fashion there are plenty of laughs in tonight’s episode, but at the same there’s definitely a message there too.

The episode’s name Unplugged comes from the Dunphy family’s competition in which each person must resist the urge to use technology for as long as they possibly can.   Whoever lasts the longest wins a prize – of their own choosing, thanks to Phil’s tendency to get carried away with things.  As usual, the funniest parts of this storyline come from Phil – his poor parenting skills, his competitiveness, and his hilarious comments are all as funny as they’ve ever been.  Luke has a few comical moments as well, which is a nice change from him always being the butt-end of other family member’s jokes.

In Jay’s house, the family tries to deal with the dog next door that never stops barking.  After the owner refuses to do anything about it, the dog mysteriously disappears.  Jay accuses Gloria of killing the dog but she refuses to admit she had anything to do with the missing dog.  There are the usual jokes about Gloria’s heritage, Jay’s age, and Manny’s unusual maturity, but somehow those familiar topics continue to be really funny.

Cam and Mitchell have decided that Lily, despite being less than two years old, is ready for preschool.  The pair decides to settle for a typical school until the receptionist there alerts them to the fact that their diversity as a family can get them an interview at any school.  As usual, Cam panics under pressure and ends up embarrassing both Mitchell and himself in front of an elite preschool principal.  This storyline isn’t one of Mitch and Cam’s funnier ones, but it’ll still get a laugh or two.

There are a number of reasons I’ve grown to love Modern Family.  First and foremost, I think that the show is genuinely funny – jokes are well written and the characters themselves are funny.  Secondly, the characters and the situations they find themselves in are relatable for a wide range of people.  Three very different types of families with a wide range of ages and personalities means that every audience member can find a character to love and/or connect with.  And finally, I really like that each episode carries some kind of message.  Sometimes they bring attention to it and other times it’s just implied, but either way I think it’s a nice touch.

Unplugged is another solid episode in Modern Family’s sophomore season.  Though many of the jokes come from familiar topics, they continue to be funny and show no signs of wear.  For now, I’m content to keep laughing at Manny having the maturity of a 35-year old and Phil struggling to seem cool to his kids and their generation.