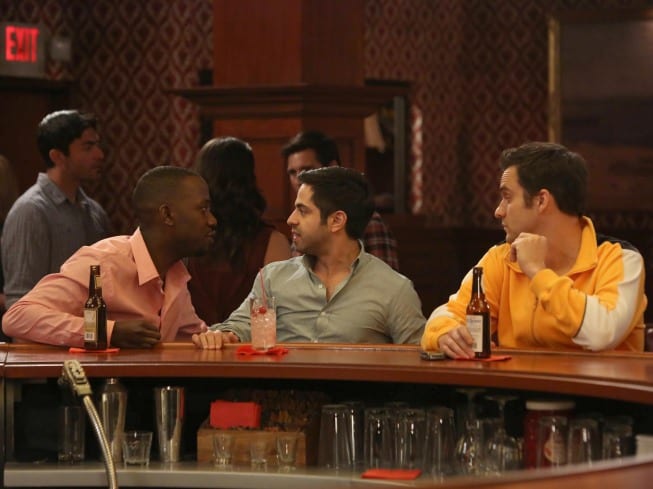 There’s a problematic nature that comes from hailing a show as your favorite on television, one of the best of its kind, laugh and emotion packed: it’s inevitably going to have that one episode in a long run of consistently great episodes that lets you down, just a little.

New Girl grabs quite a few laughs this week but lacks in a coherent plotline to make it feel like an episode with a backbone rather than a barrel of laughs shot and put on TV.

It’s filler; it’s filler with some moments to tie up some loose ends, but filler all the same.

That’s not always a bad thing—although not preferred—as long as the laughs are persistent enough to distract from the loosely drawn plot.

If anything, the cold open almost steals the show with its consistent, quick fire insult comedy and physical comedy from Jake Johnson. Nick walks out in a bright orange track suit that was sent to him by his mother having previously belonged to his dad. His dead dad he would like to remind everyone. He tells Jess when she begins to judge him for it that she can’t say anything because he has the “Dead Dad Pass” which allows him misconduct or poor choices if he sees fit. So if he wants to tap dance, she cannot tell him he isn’t tap dancing.

That there is the physical comedy I mentioned: Nick Miller and his dancing skills has been a favorite recurring gag of mine this season.

Schmidt walks in, is instantly horrified and tells him he looks like a homeless pencil.

Winston breaks the party up by walking in with Cece’s invites to her wedding which promptly throws Schmidt into a fit when he realizes he hasn’t been granted a plus one. Jess is excited because this means she gets to plan Cece’s bachelorette party, an event Cece has anticipated more than the actual nuptials themselves.

Cece and Shivrang are busy with family from India, his family, when Schmidt barges in on to cause a scene, in typical fashion. Cece rushes him out of the room so that he won’t upset Shivrang’s family, where he asks her why she wouldn’t add a plus one to his invite. She tells him it’s a wedding on a budget and the only people who got plus ones were invites who had significant others already.

He tells her he could be a in a committed relationship by her wedding, which she all but laughs at, and he takes it as a challenge much to Cece’s dismay.

Later that night, Jess tells Winston and Nick that they need to kidnap Shivrang so that she can throw Cece’s party.

However, once Cece ends up at the apartment, not only is Shivrang there, but also his Aunt who insists on going inside to meet her friends. Once they’re out of the car, Nick and Winston jump in (Winston continuing the hilarious character trait of taking plans and pranks too far) and they convince him to drive off with them as a part of Jess’s plan.

Shivrang also gets in the zinger of telling Nick, who is still in his eye sore of a jumpsuit, that he thought he was Jane Lynch.

Upstairs in the loft, Jess, pregnant lesbian Sadie and Cece’s model friends are waiting for Cece to walk in and once she does, Jess is immediately in party mode and tells Cece that it’s time to play “pin the dong on Shivrang”.

Needless to say this is when the Aunt walks in to take in the card cutout of her naked nephew as the girls chant “pin the dong, pin the dong.”

The Aunt leaves the room for a moment and Cece bursts out that she’s never actually seen Shivrang in all of his glory. This transpires into what was the funniest bit of the dialogue of the night.

“I haven’t seen Shivrang’s penis” says Cece, which is followed by a “It’s that small?” from one friend and a “You still know where it goes though?” from Sadie.

So Jess’s new plan to appease Cece as well as hide the naughtier bits from the Aunt, is to get Nick to snap a photo of Shivrang’s goods and to send it over to them to share with Cece.

Nick is against it initially but when told he can come home once he’s done it, he agrees.

Before they can get the nerve up to do it, Schmidt runs in to tell him of his latest escapades of trying to woo past one night stands into being in a relationship with him.

They tell him he should find his old ex-girlfriend from college who he was with for four years. Schmidt hesitates because it was back when he was heavier and unpopular, and she isn’t the typical type of beauty that he goes for.

He goes for it though out of desperation and ends up on her doorstep. She tells him no, that she loved the old Schmidt who was a great boyfriend but has zero interest in the one standing in front of her.

Nick and Winston try to do everything in their power to get Shivrang to let them snap a shot of his junk until they ambush him in the bathroom, only to be met with confusion. Nick fesses up and tells him Jess’s plan and understandably, all Shivrang gets from it is that Cece is nervous and rushes back to the apartment, but not before Winston’s sent a picture of Nick’s penis to try and fool Jess into thinking it’s Shivrang’s.

At the apartment, nothing is going well as the friends put on a slide show celebrating Cece’s party girl days with Cece becoming more and more frustrated until she lashes out, telling the Aunt that she never wanted any of this, upsetting Jess who confronts her.

They argue, with Jess telling her that she shouldn’t be changing herself for anyone, as Cece bemoans the fact that Jess is giving her romantic advice at all considering her current situation.

They’re just about to cancel everything when Jess gets the text, thinking it’s Shivrang’s, and it gets passed around, even to the Aunt who puts two and two together and consoles Cece, telling her every woman reacts the same way as her: nervous for not seeing her potential husband naked.

The boys run in then and Shivrang tells Cece that he’ll drop pants for her right now if she needs him to, and that the mystery of each of them to the other is what will make their story more of an adventure. He tells her she just wants to make her as happy as he possibly can. Oh, and the penis picture isn’t his but Nick’s.

Schmidt walks in just as the declaration is being said and while he isn’t as crestfallen as he may have been a few episodes back, it’s a sobering moment.

He tells her in a chance alone that he is sorry if he was ever selfish, and that he hopes she’s happy. Very well played by Max Greenfield and Hannah Simone.

Cece and Schmidt have taken the back burner for much of the last half of the season due to the ongoing saga of the Jess and Nick relationship and the huge appeal they generate. Despite that status, I still believed their plot would be rectified and their love—or whatever it was the two shared—would be revisited and would ultimately win out over an arranged marriage done out of panic.

Because that’s what shows typically like this do with fan favorite couples.

Yet after this week’s episode the only real thing of substance that I took away after a half hour of shuffling characters about was that these two may not be destined for each other after all, and that’s okay.

Initially I may have been annoyed at Cece’s marriage if it was only being used as a plot device to cause Schmidt “man pain” but the show has gracefully managed to tie in character growth with both members: both are afraid of letting go of the past-Cece and her fun and single life, and for Schmidt the first woman in a very long time he’s fallen for.

This makes the subsequent introduction of Schmidt’s last and only long term girlfriend, back when he was still “Big Guy Schmidt,” all the more fitting to the storyline.

When he goes back to apologize and win her over, three pizzas in hand, this isn’t a new Schmidt—one who has been humbled, is compassionate or empathetic—rather it’s a Schmidt who’s a little down on his luck and who is interested in what a girl saw in him back when he found himself to be so reprehensible. If he was kinder, he wants to know how, even if that means choking down all of the pizza he bought for her.

It’s almost pointless to say that Max Greenfield was perfect in his timing and physicality with the last scene, all the while bringing a bit of sad sack Schmidt into the picture. Despite this being Nick Miller and in the same facet, Jake Johnson’s season, Greenfield is always reliable, especially when the character isn’t pushed to the extremes.

“Bachelorette Party” ends and it’s lighthearted with Jess as Cece’s newly, and lately, appointed Maid of Honor, and Schmidt off licking his wounds in as care free a way possible, and it’s by no means a loss of a half hour. I laughed long and hard and multiple moments throughout the episode and was thoroughly entertained. The problem is that the show has set the bar so high for them that it almost seems like a misfire when they merely graze it.

Laughter however, is always welcome so with that, I’ll brush aside the disappointment and simply enjoy.