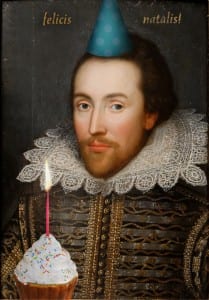 Most scholars peg the Bard’s birthday at April 23, but then again depending on who you read, he was a team, an earl, a glover’s son, a queen or Bacon.

All in all, let’s forgive Boston’s Actors’ Shakespeare Project for celebrating the (probably) 456th birthday of The Artist Formerly Known As Shakespeare (or Shakespear, or Shagspere or Shaxberd) this Saturday in Cambridge. Commencing at 3 p.m., the Shakespearean shindig is conveniently located at John Harvard’s Brew House, so you can drink deep while you geek hard.

Other friends of the Bard on hand will include Orfeo Group, the Revels, Mass Mouth and Improv Boston. Groundlings can expect some performances form these groups, There will be a Shakespeare SLAMâ€”an open mike for monologuers and sonneteersâ€”a community reading of the balcony scene from "Romeo and Juliet."

An A.S.P. press release further reports that "The Harvard Square Business Association and the Mayor of Cambridge will also be on hand to read the City Council resolution for the day."

The groups had originally planned a parade across the city, but alas, "The rain, it raineth every day" (and weather forecasts have convinced them to keep things indoors).

Rain or shine, it should be a good day for cakes and aleâ€”and ham.