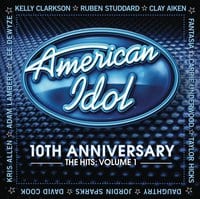 In news not involving the very public breakdown of Charlie Sheen, “American Idol” is celebrating its 10th anniversary season with, you guessed it, a CD! On March 15, RCA is releasing The Hits Vol. 1, an “American Idol” anniversary album. Just when you thought that you could avoid Idol and its troupe of desperate musicians it just got a little more difficult. Winners from each of the nine seasons, including the infamous Kelly Clarkson, and even some fan favorites circa Adam Lambert of MTV make-out fame, makes appearances on the compilation. In a bid to help audiences relive the seasons with each of its winners, the compilation is listed in chronological order with the few stragglers hanging out at the bottom of the twelve-song list.

Not to knock Idol’s concept too hard — there is obvious talent being showcased. With the 10th season’s latest musical chair medley of judges, Jennifer Lopez and that Scary Guy from Aerosmith are joining the show and there will be even more pop music antics. This is the first time in Idol history that, due to the frightening fame of coiffed teenager Justin Bieber, 15-year-olds can now audition. So what does this mean for the future of American Idol? Probably a lot more of the same: doe-eyed teenage beauties singing their hearts out sans the withering glare of Simon Cowell. Best of luck to them.