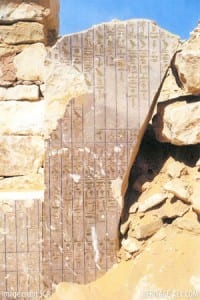 ROME — Excavations by a team of French archaeologists in el-Shawaf, Saqqara, Egypt have brought to light the burial chamber of the queen of the Fourth Dynasty, Behenu, wife of Pepi I (Merytawy) or Pepi II (Netjerkhau). The tomb was discovered when removing sand from the Behenu pyramid.

Saqqara is a vast necropolis in Egypt, 18 miles south of the modern city of Cairo.

The Saqqara necropolis covers an area of about 3 miles by 1 mile.

While Memphis was the capital of the Ancient Kingdom, Saqqara was its royal necropolis at least until the Third Dynasty.

Although replaced by the royal necropolis of Giza, and later by the one in the Valley of the Kings near Thebes, it remained an important place of burial and worship for over 3,000 years, until the Ptolemaic period and the Roman occupation.

These texts were widely used in royal tombs, both engraved on the walls and on the sarcophagi during the Fifth and Sixth Dynasties (2465-2150 B.C. circa).

Basically, these were special prayers for protecting the dead, bringing their bodies back to life after death and helping them ascend to heaven.

The French expedition is working at the Pepi I necropolis in Saqqara, where, since 2007, they have already discovered 75 feet of the Behenu pyramid and the Pyramid Texts.

Since the beginning of the project in 1989, Collombert’s team had already found six pyramids that belonged to queens from the reigns of Pepi I and Pepi II. These tombs have been attributed to queens Inenek, Nubunet, Meretites II, Ankhespepy III, Miha and one still to be identified.