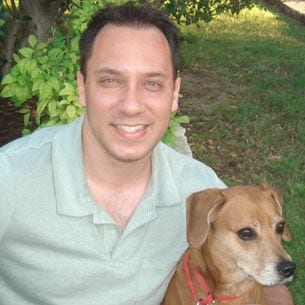 As I see it, there are three types of Bachelor/Bachelorette fans: The die-hards who believe that everything they see on the show must be real; the middle-of-the-roaders who want to believe that fairytales really do exist but deep down are suspicious; and the cynics who know going into each season that it’s all a load of crap but like watching beautiful people get drunk and hook up.

Steve Carbone, better known as Reality Steve, definitely falls into the latter category. More than just an avid viewer, though, he’s made a living out of writing sarcastic, snarky episode recaps, exposing the franchise’s inauthenticity, and spoiling each season (warning: in his latest post, he names the final lady of the upcoming season).

Carbone has covered every single Bachelorette season and all the Bachelor seasons except for the first two, Alex and Aaron. At first, he wrote only recaps, but he began spoiling during Jason’s season — he was the first to report the Molly/Melissa fiasco. He didn’t have any spoilers for the next season (Jillian), but he’s spoiled every season since.

How does he get the goods? His lips, of course, are sealed, but we do know that he’s being fed the information as filming takes place from sources on the inside other than the contestants, who are forced to sign confidentiality agreements. Just recently, per his website, the production and distribution companies behind the Bachelor have filed a lawsuit against Carbone “making some false allegations about claimed damage to the show.”

Lawsuits aside, Carbone has become enormously popular with the series’ fans. He has more than 33,000 followers on Twitter, almost 17,000 fans on facebook, and 750,000 unique visitors a month to his website. In recent months, he’s been able to quit his day job and hire additional writers, his sole income now coming from the site, on which he and his writers blog recaps, news, and gossip about the Bachelor/Bachelorette franchise and other reality shows (Real Housewives, Keeping Up with the Kardashians, Jersey Shore, etc.) Some say that his Bachelor/Bachelorette spoilers, in an odd twist, have helped the show’s ratings, not hurt them, leading to conspiracy theories that he’s working surreptitiously with Mike Fleiss, the show’s creator. Carbone has dispelled that theory many times.

I reached out to Carbone via email and had a bunch of questions for him regarding the show and a couple other topics. I’ve been following him for a while now, often times taking my lunch break to check in and read the latest scoop. I’ll admit I was a bit nervous when I emailed him – he’s known for skewering his readers in his weekly mailbag feature, in which he pokes fun at fans for sending him dumb questions. But he was gracious and quick to respond, even if he’s heard these questions countless times before.

For the last few seasons, I’ve read the spoilers before tuning in to the show. It’s been fun watching the gals and guys do their best to woo the Bachelor/Bachelorette while knowing their fate, but I think this time around I’m going to withstand the urge to know beforehand. Crap: I just went to Carbone’s Twitter page to hyperlink it above and the first thing I saw was the name of the person with whom Ben ends up. You’ve been warned.

NEELY: For those who’ve never read your column and don’t understand the reality of reality TV, can you tell us how manipulated the show really is?

STEVE CARBONE: However manipulated and contrived you think it is – it’s actually much worse. From telling contestants what to say and what to talk about, to cutting people off the show who won’t go along with the storyline they have for them, to forcing people to stay on the show who don’t want to be there, it goes beyond anyone’s imagination of what these producers will do to get the storyline they want.

NEELY: It may be obvious to most rational human beings, but between The Bachelor and The Bachelorette, why do you think the couple success rate is so low?

SC: I think it just has to do with the fact that when you’re taping the show for the 6-8 weeks, you are in a bubble. You can’t talk to any family or friends, you have no TV, no internet access, no phone, etc. Your sole focus 24 hours a day, 7 days a week, is that one person. So naturally, you fall for them a lot quicker than you would in the real world where you could go on a date with someone one night, then be out with someone else the next night. Once the final couple is back in the real world off the show, they pretty much realize they barely know that person at all, the dates aren’t extravagant anymore, and their “popularity” is infinitely increased, meaning they know even if it doesn’t work out with the person in the end, they’ll be plenty of other opportunities for them.

NEELY: Were there any couples over the years who you thought might actually make it but didn’t?

SC: I really haven’t cared enough to put any thought into who might make it and who wouldn’t. Once the season is over, to me and for my site, they pretty much become yesterday’s news and it’s on to the new season. For the “Bachelor” franchise, considering they are 0-for-15 (Jason never married the girl he chose in the end), I don’t ever expect that to change. The male lead on this show goes into this show knowing how popular he will become with women everywhere, regardless of who he picks, and he knows that. I think that’s why it’s never worked out. He’s out chasing more women once the break up eventually happens. I think women in the “Bachelorette” lead tend to take the process more seriously, which is why we’ve seen some “successes” (even though their hasn’t been a wedding yet), with Ali and Ashley. Those couples seem to stay together a tad longer, even if they don’t end up getting married. Meredith and Ian were together two years, Ali and Roberto have been going for over a year now, etc. Neely’s Note: Ali and Roberto are dunzo, as of a few weeks ago.

SC: I really don’t like declaring which team I’m on, but I’ve definitely been outspoken against Jake for years now on how phony I think he is. And his constant appearances on reality TV only back what I’ve been saying since Day 1 about him.

NEELY: Do you believe at this point that most of the contestants go on just to get famous, etc., or do you really believe they are looking for love?

SC: ALL the contestants go on with ulterior motives. Whether it to be the next Melissa Rycroft from this franchise, promote their business, hoping to land a modeling job, appear in magazines, become more popular back home, etc. They all do it for exposure. And if they happen to fall in love, then that’s just a bonus. The show has become the #1 tabloid reality TV show by far, and all the contestants know that going in. They want to become part of this dysfunctional “family”, because they know that even if they don’t end up being the final one, they know that they can start getting with past contestants. The “family tree” of who’s hooked up with who in the “Bachelor/ette” franchise is beyond anyone’s comprehension.

NEELY: Over the years of reading and commenting about love/dating, etc., what’s your biggest advice to daters out there on finding love?

SC: Ha ha…well, being 36 and single myself, I’m probably the last guy people want dating advice from. I guess the best piece of advice I could give is don’t settle. Don’t be with someone just because you HAVE to have a significant other. You’ll never end up happy that way.

SC: Since I don’t really know any of them personally, the most entertaining and realistic season to watch was Brad’s first season and Charlie O’Connell’s. Brad’s had the most realistic ending, and Charlie’s was completely different than any of the other 14 seasons in that they shot it in his hometown and never did any crazy, over-the-top dates.

Favorite male contestant? I can’t pick just one. I might get a phone call or two asking why I chose them over another.

SC: I guess I liked Ali’s season the best because it was really the first time where they started traveling early on in the season.

SC: I love how ABC is promoting him as this renaissance guy with all these different interests, when in reality, he’s no different than the rest of us. I mean, they already had his YouTube video removed after I posted it on my site called “Cream Dream” where he and a buddy made a video about, well, masturbating and wet dreams. Not to mention, once the guy was done filming Ashley’s season, he started “seeing” a former contestant from Brad’s season, plus, had a nice little fling with Jennifer Love Hewitt. So to pretend he’s this All American, genuine guy who co-owns a winery and is just looking for a wife, couldn’t be further from the truth. He’s just a guy’s guy who wants to play the field and loves what the attention the “Bachelor” will bring him and his winery. Nothing more, nothing less. Lets not make him something he isn’t.

NEELY: What are three things every woman should know about men?

1. We are the simplest creatures on the planet. We are not as hard to figure out as some might think.

NEELY: What are three things you want to know about women?

1. What could you possibly be doing in the bathroom for an hour and half when you’re getting ready?

3. Why they love being with guys who treat them like shit.

NEELY: Are you still single and looking for love?

SC: Yes, I’m single. I’m looking, but, I’m not trying very hard. If it happens, it happens. I’ve never been one to force it. My best relationships have come when I was least expecting it.

The promotional ads for ABC’s new season of The Bachelor, featuring floppy-haired Ben Flajnik, have been in heavy rotation recently. The show premieres on January, 2.