Activision will air a Modern Warfare 2 trailer during this weekend’s Sunday Night Football matchup on NBC, according to a USA Today report.

The commercial, likely a 30-second cut, will air during the gridiron battle between the Pittsburgh Steelers and San Diego Chargers this Sunday night at around 8pm.

The trailer is said to contain brand new gameplay footage as well as whatever the hell is going on in this screenshot. 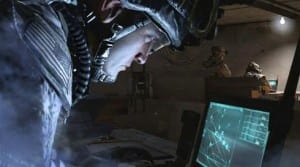 Activision is kicking off a fierce, multi-million dollar marketing campaign for Modern Warfare 2, one that now consists of this ad, the Modern Warfare 2 Monster Energy Drink line, and God knows what moving forward.

If you miss the trailer during the game on Sunday fear not as we’ll upload it just as soon as we can.