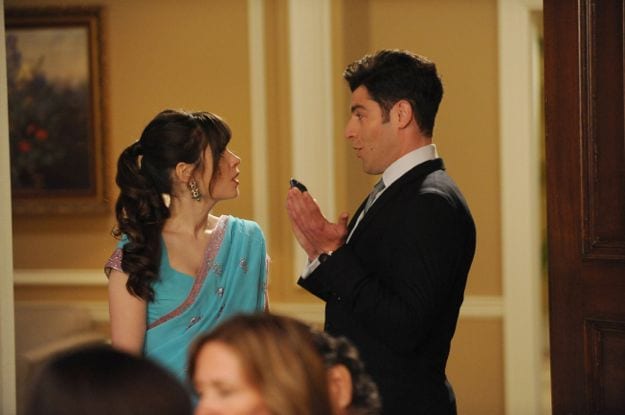 Season two of New Girl has been a revelation in primetime comedy and in my opinion, the best of its genre this year. It’s managed to completely out do its previous season, escalating in warmth, character moments and interest so quickly and in such a self-assured manner that it feels like a different show all together. With all of that expectation on its back there is a lot of weight that goes into its finale, and it almost seems unfair to assess such an impressive season on one singular episode.

Because truth be told, the finale wasn’t the best episode that New Girl has done, I wouldn’t even rank it in my top five this season, but it was solidly funny with some wonderful sweet moments that tidily wrapped up a stellar season.

Jess and the boys are dressed and ready for Cece’s wedding, Nick under-dressed as usual and Jess wants a picture of all of them. While her father Bob is taking a picture he realizes that Nick and Jess are posing more as a couple, and tries to edge him out of the picture. This only leads to an argument about Nick’s suit until all of the boys have managed to storm out of the picture leaving only Jess.

In the next scene, at the wedding Schmidt has loaned Nick what he calls his worst suit, which is fine by Nick who already looks cleaned up. Jess asks him if he’s doing this because of what her father said to him in the previous episode and he feigns ignorance. The two complement each other and it’s nice to see the thresholds of a tentative relationship between these two, considering I’d figured they’d beat around the bush for a little while longer.

Elizabeth is there, too, and she and Schmidt share a sweet scene that reaffirms my hope that they’ll last.

Schmidt runs to find a bathroom and finds Cece’s dressing room instead and they share a moment and good lord this is exactly what I didn’t want. Schmidt believes that Cece told him with her eyes that she doesn’t want to get married. He tries to tell them it’s not because he still has feelings for her, because of Elizabeth, but because they’re friends. Jess is livid and tells him to stay away from Cece and to not ruin her day no matter what ridiculous notion he’s cooked up. He waits until he leaves and tries to get Winston to join him in sabotaging the wedding, finally convincing him once he tells him that he can go as crazy as he wants, something the notoriously bad at pranks Winston has always wanted.

The first prank involves when the wedding begins with Shivrang riding in on a white horse and the whole shebang. While waiting for the plan to hatch Schmidt notes that Nick is trying his best to impress Jess: wearing a suit, holding her purse and wearing deodorant under both arms. He tells him that Jess either wants the real Nick or none at all. A sweet sentiment until you realize it’s just a way to manipulate Nick into helping him with the sabotage.

But luckily he has the crazed Winston who scares the horse carrying the husband to be until the horse begins galloping towards the main road. He turns up just in time and in one piece just for the wedding procession where they watch Cece about to walk down the aisle—serene and beautiful until one of the most annoying songs on the planet “Cotton Eyed Joe” starts with the aid of Winston who is very easily becoming the MVP of the episode, Lamorne Morris being allowed to stretch his physical comedy muscles.

Jess finds Nick near the stereo and believes that Nick has done it. She says Winston or Schmidt wouldn’t have been smart enough to duct tape the stereo so no one could turn off the song, and that they both know this is his favorite song.  This leads to a fight where Jess calls Nick childish and stupid. Jess is understandably stressed in this situation but it becomes hard to understand her frustration when he’s telling her that he wouldn’t do this at her best friend’s wedding, a wedding that Jess, someone he cares deeply for, has worked tirelessly over in such an earnest manner.

It’s one of the television moments where the audience are allowed to see the growth of a character while the counterpart is left a few steps behind. It’s sad to see a character such as Nick who is so often on the losing side, lose for yet another moment to the person who typically has his back. We see how hard he’s trying to impress her, to show her he can be different, when she only sees the same old Nick.

More of the ceremony takes place until Schmidt creeps up to Jess and tells her in a panicked moment that they may have gone too far. Once in the hallway Schmidt tells Jess that it was Winston’s idea.

Winston is in the air-ducts with a badger. Shock and horror abounds.

There’s a nice little shot of Nick and Winston in the air ducts and when Jess tries to call Nick after realizing he was telling her the truth, Winston accidentally opens the cage with the badger. This is could very easily have been slapstick, it very nearly was, but luckily the actors sell it and Nick’s screeches of terror drive a moderately funny scene into a hilarious one.

After messing up his hair and smacking him around, Jess makes Schmidt give her a lift up to the air duct. She apologizes to Nick about how she reacted earlier. He tells her that it was never about that or the prank but Jess’s automatic assumption that Nick will mess up everything that he touches.

So for now, he needs to go and find the badger.

“Is this how you wanted your life to be?” Nick asks Jess, he’s not a healthy person who will lead them to a healthy relationship. He asks her if she thinks they are a mistake. Just like Jess’s father he believes that he isn’t ready for Jess, that she deserves better and that he has too much going on in his head, that he hasn’t yet grasped how to successfully be an adult and that he can’t help but believe that she isn’t ready for this.

Or maybe he’s so afraid of messing up and letting her down that he’s trying to sabotage their relationship before it’s even started. It’s a wonderful scene for the consistently impressive Jake Johnson.

She admits that there is a small part of her that believes he’s too much of a mess.

But right before anything can be mended, Jess, Nick and the creepy badger fall through the ceiling disrupting the wedding with a bang.

Jess makes an announcement that there might be a badger on the loose as Winston yells directions from the ceilings but Jess realizes almost too late that Cece really was giving out that look.

And here is where a perfectly fine episode began to dip in quality and it all came down to the character Cece.

Cece stops the wedding, just as Schmidt had envisioned, but because she wasn’t in love with Shivrang but with someone else.

Shivrang announces the same thing for Taylor Swift/Elaine and completely throws away his ability to be the straight man against the crazy. It’s a funny enough scene and Taylor Swift is fine despite my disdain towards her, but it definitely was there for humor’s sake rather than a plot point that fit the nature of the character.

The fact of the matter is that I will hate it if Schmidt and Cece get back together in such a contrived and typical sitcom manner. There is no need to pair off all of the regular characters on the show, it won’t make or break the interest in the series. While Cece and Schmidt used to be an interesting pairing, especially in the slow moving season one, we’ve spent a good portion of the season with Cece not returning Schmidt’s feelings and instead focusing on her future. Sure we’ve seen Schmidt mourn the loss and try to move onward from that relationship, but it was always his loss not Cece’s. For Cece to out of the blue, during not only a wedding episode but also a season finale, come out as say she still loves him and then make him choose is ridiculous for the ongoing character plotlines.

There’s also the fact that Elizabeth beats Cece in charm by spades. Elizabeth is just interesting: she’s fun, she doesn’t care what anyone thinks of her and loves herself despite it, and she brings a more interesting and better layered version of Schmidt.

And let’s face it; Hannah Simone has always been the weak link in the cast.

More interesting is the emotional stand off between Jess and Nick where they decide to call it. They say they gave it a good chance but they were only fooling themselves, it’s not like they’re in love or anything.

Those looks they’re giving each other would beg to differ.

So Jess walks away looking defeated despite her standing and Nick finds a bar and also his voice of reason in the badly badger bitten Winston.

Winston asks what happened with him and Jess and he says that they called it and now he’s drinking it away, always his best move.

His dad’s move, too, Winston tells him. And it’s a nice reminder that these are friends don’t just fight and poke fun. They also know each other’s histories. Winston tells him that his dad’s move was always running away when things got tough and he tells Nick that there are other moves to be made.

So Nick runs toward Jess instead of further away. He finds her at her car and she tells him that she isn’t ready to quit trying to work and for him to please agree with her. He walks over and kisses her and if that isn’t a clear enough answer I don’t know what is.

They climb into the car and drive away laughing and fighting with each other and it’s a sweet scene to end a season with.

Especially considering I thought that were just going to Friends us. Nothing is more annoying than playing the “will they won’t they” scenario for longer than a season or two so the fact that they acknowledged each other’s mutual attraction and their want to make the relationship work is such a refreshing move that it makes the prospect of season three all the more exciting.

At this rate, their greatest flaw is still their misuse of Winston’s character, but otherwise what a fantastic season and what a wonderful show that has managed to create intrigue in all four of the leads, make them all seem like players in the show, and the show’s capability to make an obvious pairing passionate and exciting to watch.

I can’t wait until season three.