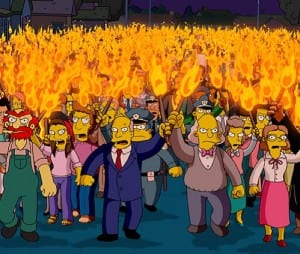 Artist's rendition of the angry mob of Google workers outside the Apple offices in Cupertino.

In the ongoing volleying between Apple and Google over the Google Voice application, Google has released an unredacted version of the letter it sent to the FCC. In it, Google states that Apple has unequivocally rejected the Google voice application for the iPhone.

The Google Voice application was supposed to allow iPhone users to access all of the features that are part of the Grand Central system that Google acquired back in 2007, including one VoIP phone number that rings all of your phone numbers, integrated SMS, and customizable voicemail and call-screening depending on the caller. Rumor has it that Apple and AT&T are worried that the Google app could replace core functionalities on the iPhone”"or eat into AT&T’s bottom line.

Here are the relevant quotes. Google states in its letter to the FCC which discussed negotiations between the two companies:

Apple representatives informed Google that the Google Voice application was rejected because Apple believed the application duplicated the core dialer functionality of the iPhone.

This stands in direct contrast to Apple’s statement in a press release:

We do not agree with all of the statements made by Google in their FCC letter. Apple has not rejected the Google Voice application and we continue to discuss it with Google.

In any case, one of these companies is lying, because they can’t both be true. Google claims that Apple rejected both the Google Voice and the Google Latitude applications because they duplicated functions the iPhone is already capable of doing and might create customer confusion. This is, of course, laughable considering the number of calculators, stopwatches, email apps, and all the other apps available in the store that blatantly duplicate available functionality.

Google and Apple used to be a match made in heaven, until the two companies found themselves in ever-growing competition. With Google throwing its full weight behind the mobile open-source Android platform, they’re increasingly finding themselves in direction competition with Apple”"so much so, that Google CEO Eric Schmidt stepped down from Apple’s board of directors.

Only time will tell if these two companies will ever be able to make nice. We sure hope so, because the idea of using MapQuest instead of the pre-installed Google maps application on our iPhone makes us shudder.