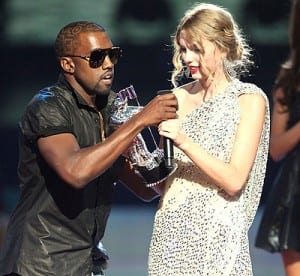 You just know you’ve fucked up when goody two-shoes Kelly Clarkson calls you an asshole.

In a post on her blog, Clarkson went on a tirade against Kanye West that can only be described as the musical equivalent of Rocky Marciano’s “kill the body and the head will die” knockout of Jersey Joe Walcott in 1952.

It was a series of relentless jabs and hay-makers.

“What happened to you as a child?? Did you not get hugged enough?? Something must have happened to make you this way and I think we’re all just curious as to what would make a grown man go on national television and make a talented artist, let alone teenager, feel like shit,” Clarkson wrote.

She is, of course, referring to West’s outrageous, arch-asshole attempt to ruin the MTV Video Music Awards night for, of all people, Taylor Swift.

Because she’s such a fuckin gangster. Frankly, I’m surprised Swifty and her peeps didn’t pull out their 9’s and bust a few caps right on the motherfuckin stage, yo.

Clarkson goes on to say that she likes her “asshole ex-boyfriend” who cheated on her better than Kanye, and she admits she never even met Kanye!

Clarkson lost the VMA Moon Man to Swift, but said she was “excited” for her.

Pink, who also lost in the Best Female Video category to Swift, reportedly had to be stopped by security from rushing the stage and knocking Kanye on his ass, which would have been the best publicity stunt MTV could have pulled off, since they still try to call their awards show the “Video” Music Awards, even though all they do is replay episodes of “The Hills” and “The Real World.”

But back on topic:

“Kanye West is the biggest piece of shit on earth. Quote me” Pink wrote to MTV. “My heart goes out to Taylor Swift. She is a sweet and talented girl and deserved her moment.”