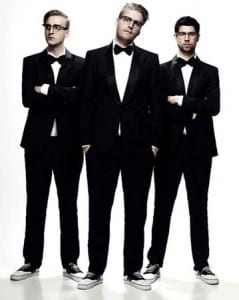 Swedish trio Movits! makes music best described as “hip-hop-swing-jazz.” Seriously. Get ready America, because you haven’t heard anything like this before.

With song titles like “Ta På Dig Dansskorna” and “Huvudvärken,” the band did not even realize there was a market in the United States for their music until after Stephen Colbert invited them onto the Colbert Report in 2009. Even now, I have to conduct this interview through email because the band does not have a U.S. cell phone with them while touring the Midwest and West Coast. But armed with two albums worth of infectious dance material, including their latest single, “Sammy Davis Jr.,” (a song that would fit in easily with one of those old iPod commercials with silhouettes dancing against colored backgrounds), it should not be long before Movits! attracts even more attention all over the world.

Originally, the guys started out playing acoustic hip-hop and touring around Sweden. However, at an after-party in 2005, they were dancing to Benny Goodman’s “Sing Sing Sing” and realized what kind of music they really wanted to be making.

“That song started everything,” said saxophone player Joakim Nilsson. Other influences include everyone from Outkast and Lil’ Wayne to Maskinen and Lykke Li. “I think hip-hop in Sweden is a bit more experimental. It fuses a lot of different styles together.”

No doubt this atmosphere is conducive to the band’s own musical experimentation.

Taking their name from a character in old folk music songs, the band (which also includes brothers Johan and Anders Rensfeldt) released their first album, Äppelknyckarjazz (roughly translated, it means “apple stealing jazz,” and refers to street kids back in the 1930s and 40s in Sweden who wore “apple-stealing pants”). But despite the old-time appeal, the lyrics do focus on modern day issues. Many of the songs are subtly written about social matters and injustices. For example, translated from “Sammy Davis Jr.”: “This is what we in Lulea call a James Brown Moment / They call it a daydream, sayin’ it was different / But grandma, it’s alright / That I should grow up, cut my hair and get a job and not tryin’ to be James Brown / But was it not the same / For young mom and dad, when it happened.”

The first album earned Movits! more attention than they expected. “We didn’t really plan on touring at all in the U.S.,” Nilsson says. “But the Internet has made it a lot easier to discover new music from different parts of the world and I guess that people are more used to hearing languages they don’t understand.” As far as the group’s performance on the Colbert Report, Nilsson joked, “Oh, it was just another day at work,” before adding, “No, seriously, it was a groundbreaking moment for us. After that, our album came out and reached number one on the iTunes hip-hop chart in the U.S. I guess it’s true what they say about the Colbert Bump.”

In fact, according to a follow-up show, Colbert reported that before the band’s appearance, their first album was number 93,400 on the Amazon.com sales charts. After the broadcast, the album shot up to number 75.

Now, the band’s second album, Out of My Head, has been well received in Sweden, and the band has logged many miles traveling around the U.S., playing festivals like South by Southwest and the Lotus Festival. Next up, they will be touring Europe and hopefully by the end of the year, the band will be headed back to the studio. “We have some new ideas that need to come out,” Nilsson said.

Until then, Movits! is enjoying their time in the U.S., although they are still occasionally reminded how much they still have to learn.

“We had an amazing show last night at a festival in Bloomington, Indiana,” Nilsson said, “but one thing that we’ve learned on this trip is that you guys tend to give different cities the same name. Apparently there’s a Bloomington in Illinois as well and of course we booked all our train and plane tickets to that place!”