We mentioned the possibility of a new Okami title in the works thanks to a recent Capcom trademark, but I have to say, the Nintendo DS is not where I thought the sequel to the wonderful 2006 game would go. Fans were split about where the next version should go, either‚  in HD version on the Xbox 360 and Playstation 3 or on the Wii once again, where it’s control scheme–the IR and celestial brush were made for each other–worked wonderfully. Now we get to see how well the stylus works, or at least, that’s the assumption. The DS can do cel-shaded and make it look good as well, so I’m interested in seeing how more of Okami’s wonderful art style fits in your pocket. 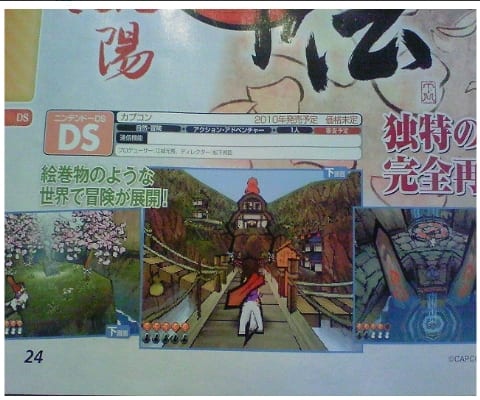 Clover Studios, the original developer, is defunct, with many of its members now composing Platinum Games (MadWorld and the upcoming Bayonetta). Capcom still owns the IP though, and Ready at Dawn worked on the Wii version. Hopefully an official press release comes soon so we can see just who is working on this game and what it will entail.