NEW YORK — “Remind Me Where the Light Is” the sophomore effort from Los Angeles coed duo Great Northern, kicks off with “Story” whose pounding drums and coarse guitars may leave listeners wondering if the band has abandoned the ethereal sound that permeated their debut, 2007’s “Trading Twilight For Daylight.”

The answer is, not entirely.

“Remind Me Where the Light Is” is solid from start to finish, bursting with orchestral layers and catchy hooks. Throughout the aptly-named record, Rachel Stolte and Solon Bixler explore darker themes than they did on their previous material. Now three years into their musical endeavor together, it’s no surprise that there have been a fair number of ups and downs to provide lyrical fodder (the two are romantic partners as well as bandmates).

“New Tricks” a hauntingly lethargic return to form that fans of “Trading Twilight for Daylight” will appreciate, becomes an outlet for this theme, with Stolte musing, “This is us falling / This is us falling down.”

Stolte continues to handle most of the lead vocal duties with the breathy singing style that complements the music nicely, and she sounds more confident doing so. But Bixler also takes center stage on a few tracks, most notably the haunting “Driveway” which was recently featured on an episode of “Grey’s Anatomy.” Some of the album’s best moments, though, come when the couple harmonizes, as on the excellent “Warning.”

The often cinematic string arrangements bolster songs like “Driveway” and “Fingers”; the latter’s structure incorporates violins coaxing the song along toward a thumping crescendo. Occasionally, however, the orchestration becomes a bit overdone, sounding jarring and misplaced on otherwise strong tracks like “Snakes.”

The title “Remind Me Where the Light Is” suggests that Stolte and Bixler are searching for the winning formula they cultivated on their debut. But it seems likely they never lost it in the first place. 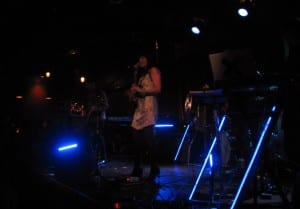