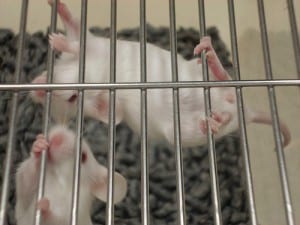 Cancer is a monolithic enemy of modern medicine. Because cancer is such a large, nebulous collection of loosely related diseases, scientists have found it difficult to pinpoint the specific causes of cancer, which is why you hear about something new causing cancer basically every day on the news.

While many of these discoveries are based on shoddy science, a recent study, which was actually rather elegant in design, has found that a lack of social interaction can lead to increased breast cancer tumor growth, indicating that social environment could play a role, along with environmental and genetic factors, in the determination of the severity of a cancer.

The study used genetically similar mice that are altered so that they develop mammary tumors. Mice were either housed alone or with other mice. The mice kept alone showed greater tumor growth than the mice housed together.

Scientifically, the researchers found higher stress hormone levels in the mice housed alone before there were even measurable changes in the tumor sizes. Even though the two groups of mice were genetically very similar, the stress hormones caused measurable changes in gene expression before there was even any indication that the tumors in the two groups were growing differently.

The researches point out hat they intend to focus further research on researching the specific cell types in which these genetic changes are occurring, and then targeting the pathways that connect the stress hormones to their detrimental effects rather than to suggest that cancer patients should maintain strong social contacts.

Either way, every new thing we learn about cancer is another tool in our arsenal to conquer the disease, and this is an interesting find that gives scientists a new avenue of research.