One can only hope technology historians will characterize the name Atari by its 1980s contributions to modern video gaming.

Through little fault of its own, the Atari name has floundered under its European parent, Infogrames, in the 21st century. But maybe, just maybe, Atari can regroup going forward.

Gamespot reported recently on Atari’s bleak financial reports and the doubt expressed by the company towards the future. Its financial reporting shows earnings down to $10 million with losses as high as $12 million.

In response, one reader posted this, which has substantial bearing on this situation:

This isn`t the “real” Atari to begin with. The original Atari was a publisher by accident, not design. Its main business was hardware and the software to put on it; in fact it went to court to prevent anyone else from having access to their machines in any capacity, (they lost) which led to the way things are today. The real Atari died with the 7800/ST/Lynx back in the 80s. I`ve said it before, but it is a shame companies can`t die young of an overdose or in a plane crash like rock stars do so we can remember Atari young, with a head full of hair and a Space Invaders cart plugged in blooping away happily … instead of with Enter the Matrix hanging out of it`s arm, fighting with it`s ex over custody of the Dragon Balls, (sic) slowly blowing away our happy memories in a belch of Driver ports. Even an intervention may be too late to save the Atari we all knew and loved. – “Jaeme“

Atari is today what GT Interactive Software was in the 90s. Seriously — Infogrames bought GT, ceased the brand and changed the name of the American branch of Infogrames to “Atari.” But it goes much more beyond that.

Atari is trying to hold on to its stalwart names like DragonBall Z and Dungeons & Dragons, and that’s a good thing. I firmly believe that Atari needs to get back to basics. It’s going to have to restructure its entire operation to get back in the black.

Take the lesson from 8 years ago. When GT Interactive was facing an unsure road ahead, they poured all of their resources into a new, untested Playstation game franchise called “Driver: You are the Wheelman.”

It was a terrible game. All ports and sequels (Which Atari inherited from GT) have been terrible. It was their big “savior” and months later GT didn’t exist anymore.

Get back to basics. Atari’s savior isn’t going to be something new — they (and GT before it) don’t have the resources to produce an effective, amazing and captivating brand new gaming franchise. It’s sad, but that’s the fact. Atari has sold off studios and properties. They are basically a marketing firm at this point.

Atari has for years tried to recapture its arcade successes by releasing its classics in compilation form … over and over and over for the last 10 years. I think the games are the right approach, but I think some development needs to be done.

Here’s what I think they should do:

Make a new Misisile Command
Make a modern Missile Command. Don’t screw with the gameplay too much — point and click is what brought the quarters in — but give it some modern graphics and sound. Maybe make it a hybrid of the old style with some new style of play and a riveting storyline. Anti-missile defense is still a hot topic, but its the basic, addictive gameplay that Atari can build on to make a new standalone product.

No compilations of old games. You did that … a lot

No more Driver.
Test Drive is a decent driving platform. Build off that. Let Driver die. 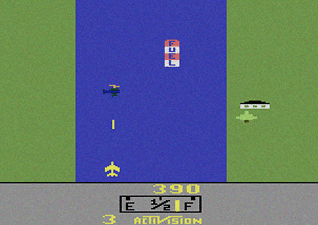 Chopper Command and River Raid come to mind. I know those were Activision titles, but they were Atari 2600. (I know Atari had Defender, but Defender wasn’t as good) Another title (which I’ll be offering the shareware of for download next month) is Raptor: Call of the Shadows, from Apogee/3D Realms. Simple concept: shoot everything. Give it some story, some sick sounds and a ton of weapon upgrades. Make it $19.99 and available via multi-platform download.

So let’s try this: Give players their choice of canons, missiles, tank guns, grenades, frigging Ninja throwing stars, just about anything creative you can think of with updated graphics and sound and let two (OR MORE?) people take turns shooting at each other until there’s only one left standing.

I’m just not sure if I’d leave the numerical aiming in or develop some new way of shooting, like a grid or guessing or visual aiming, etc.

Hey, Infogrames, make a Fahrenheit sequel for Wii
Too bad you changed the name in the US, but Indigo Prophecy, as we know it by, was a good game, and I think Wii controls would work better than the “Simon” play by color controls.

Make a Time Crisis-style game for Wii with the Zapper
An arcade shooter. A different Atari did this with an Area 51 port for the PC. It wasn’t great, so try again. Don’t call it Area 51 either. — Anyway Midway owns that name now.

Release Pong for Xbox Live Arcade, etc. Don’t change it at all. Charge 25 cents for the download.