The title of this review is trite. There are probably a thousand of them out there. “Better call the Emmys!” “Better call my cardiologist: this show was so good I had a heart attack!” So why did I take the easy way out, and why, more importantly, does my rubric convey disappointment with Better Call Saul, now that it’s all over? 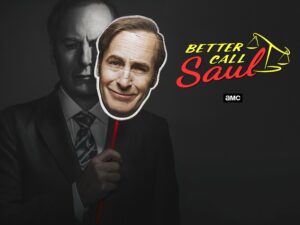 Let’s back up a step first. It’s said The Sopranos changed the course of television history, specifically cable television. It debuted on HBO in 1999, and before it, one-hour dramas like it simply didn’t exist. Breaking Bad kept that tradition alive when it came along in 2008. But Breaking Bad did more than capitalize on what The Sopranos started: it saved and transformed a network.

Breaking Bad aired on AMC, which, prior to its debut, was a network dedicated to John Wayne movies and other fare like Petticoat Junction. But some sharp executives realized one-hour dramas that arced over the course of an entire season, instead of resetting each week (a la Miami Vice or LA Law) could exist and thrive even on minor networks such as AMC. Rather than slink into non-existence, Breaking Bad catapulted AMC into a powerhouse of original programming

I reviewed the five seasons of Breaking Bad in 2013. It was the story of a high school chemistry teacher who had terminal cancer. To leave his family with something after his death, he used his knowledge of science to create a style of methamphetamine that would make millions of dollars.

In the second season of Breaking Bad, a sleazy lawyer named Saul Goodman appeared to help the chemistry teacher, Walter White, and his punk sidekick and former student Jesse Pinkman launder the money they made cooking meth.

Saul Goodman (we only learned many years later the name was an alias and a homophone for ‘it’s all good, man’) was the epitome of a shyster—a walking example of why Shakespeare wrote “kill all the lawyers.” But Goodman was not simply a cold-hearted villain; he was also a lot of fun. Played with panache and contempt and humor by Bob Odenkirk, he, among all the secondary characters in Breaking Bad, was perhaps the most engaging.

So thought Vince Gilligan, the creator of Breaking Bad, who gave us the spinoff Better Call Saul. “Better Call Saul” was Saul Goodman’s advertising catch phrase, and the show, which debuted in 2015 ran for six seasons, concluding just recently in August of 2022. The majority of the show took place both before (mainly before) and after the story-time of Breaking Bad, but it would seem after 14 years the Breaking Bad universe has ceased expanding.

There was a ‘Breaking Bad story’ in 2019, a feature film titled El Camino which was a follow up on the Jesse Pinkman character. This seemed to be a test run as to how far the creators of Breaking Bad could push tributaries of the main flow. But beyond El Camino and Saul it seems the world of meth and crime and hucksterism in New Mexico has run its course—at least as far as Gilligan and AMC are concerned.

In my review of the totality of Breaking Bad, I noted that part way through season three, I lost faith in the show. It was clear the producers needed to manipulate the story line to keep the drama going when the characters had everything they wanted. It felt cheap, and from there on out –some great flourishes aside—Breaking Bad was a little sloppy, especially the final season.

The entirety of Better Call Saul gave off the same vibe—sloppiness.

That’s why I felt compelled not to label this writing a review but a post mortem, an obituary. I came not to praise Better Call Saul (well, I will a little) but to bury it.

The main problem with Better Call Saul is it tried to force the square peg in the round hole. It tried to take a thoroughly despicable character and excuse him, to make us sympathize with him, to even root for him at times.  Hollywood believes, rightly or wrongly, audiences won’t pull for a bad guy, but how to make a scoundrel palatable?

The show created a backstory for Saul, born with the name Jimmy McGill, that never felt right. Indeed, it was downright ridiculous. And for six seasons Better Call Saul’s attempt to match what we knew of Saul Goodman from Breaking Bad to that of Jimmy McGill and then back into Saul Goodman was more twisted and contrived than a day-time soap opera.

I’m not going to detail the entire plot of Better Call Saul, but as best I can here’s the thrust of it. At the conclusion of Breaking Bad, Saul Goodman goes on the lam and takes up the quiet identity of a Cinnabun manager in Nebraska—far away from the chaos and criminality he created in New Mexico.

The show then flashes back to a younger Saul (Jimmy), and we see how he came to New Mexico from Chicago to cut his chops at his brother’s law firm. His struggles with his brother and other lawyers and keeping his nose clean comprise most of the first few seasons. Also interwoven into the series are some old favorites from Breaking Bad and some new characters.

The newer characters were far more interesting because we didn’t know them or their fates. Kim Wexler and Nacho Varga, for instance, were the most compelling characters in Better Call Saul. Breaking Bad veterans such as Gus Fring and Hector Salamanca were less intriguing (though no less terrifying) not only because we knew how their stories concluded, but also because they didn’t always gel with what we knew of them from Breaking Bad.

These inconsistencies plagued all characters who made decisions, went back on them for no reason and then went back on the went backs. It became confusing and infuriating at times and again felt contrived to keep the drama going when something more organic and realistic would have petered out.

Indeed, it was difficult to watch characters like Saul/Jimmy and bad ass enforcer Mike Ehrmantraut (also first appearing in season two of Breaking Bad) as younger people because the actors who portrayed them grew older before our eyes. Jonathan Banks, who can never be given enough praise for the way he played Ehrmantraut, is 75, yet in the show he is supposed to be twenty years younger if not more. We are led to believe he is one of the toughest and savviest guys in the southwest but the actor can barely move because he’s geriatric. This is not his fault, but in the show it was a glaring hindrance to verisimilitude.

And what about our show’s hero Saul and the actor who played him, Bob Odenkirk? He apparently had a heart attack during the filming of the last season, and there are a few episodes in which he’s wearing so much makeup to make him look younger and healthy you think he went to the same esthetician as Joan Collins. When characters such as Walter White and Jesse Pinkman make surprise cameos it’s always done in dark lighting or concealing costumes because even the most skilled make up artist can’t make a 42 year old man look like a punk 20 year old kid.

Moments like these killed suspension of disbelief, and a la, Star Wars (a universe much more aggressive about choking screens with new movies and series), the evolution of the characters never worked. Just as I never believed the Anakin Skywalker of Episodes I-III was the Darth Vader of episodes IV-VI, the Saul Goodman we experienced in Breaking Bad did not and could not have sprung from the Jimmy McGill the showrunners gave us in Better Call Saul.

Why then did I not give up on the show if I had so many grumbles? Well, despite its shortcomings, Better Call Saul was still darned entertaining. Vince Gilligan is an excellent storyteller and world builder. As a filmmaker, his style is quirky and detailed. Shot selection and editing was always guaranteed to engage. The series writers and directors knew how to spin good yarns and whip up characters that compelled, and the actors who played them were well chosen and always up to the task. Despite the ham-handedness of some of the plot, I was never bored. I wanted to find out where it was going, and that is always the hallmark of a strong raconteur.

Yet there was also a masochistic angle to my continued viewing of the show. I felt invested in the series and seeing it through. When you devote more than a decade of emotion to a story you feel you shouldn’t give up. Indeed, oftentimes, you think the producers might be able to turn things around if you just give them one more week.

The best way I could describe the series is this: Better Call Saul was like a beautiful picture not hanging straight on the wall.

Whatever my feelings, one thing is certain: Breaking Bad and Better Call Saul gave AMC the opportunity to create many other great television programs. Their lineup since Breaking Bad has not been all winners, but past, present and future shows will be eternally prefferrable to reruns of Rooster Cogburn.

So this review, perhaps, should not be a post mortem of Better Call Saul but a birth announcement of sorts. Saul Goodman might not be with us anymore, but just like one of his cons he’s made his marks (us) believe he’s got something worth holding on to.