One of the most underrated and unknown comedies of the last 50 years is Fatso, which stars Dom DeLuise as a man who has weight problems. You see, Dom (that’s the character’s name, too) eats, not just because he is hungry and can’t control his appetite but because there is something missing in his life. He eats to fill a void. That’s the metaphor. And when he meets the woman of his dreams, he is able to fill that void –not without some stumbles—and rid himself of the hunger.

Fatso kept springing to mind while watching the newly released coming of age movie Butter. In many ways, Fatso and Butter are worlds apart. Fatso is set in the ethnic stew of New York. Dom is nearing middle age, Catholic, and runs a gift card store. In Butter, the lead character (nicknamed Butter) is a high school kid, from a McMansion section of Scottsdale, Arizona who plays saxophone. On the surface not much is similar except the flab. 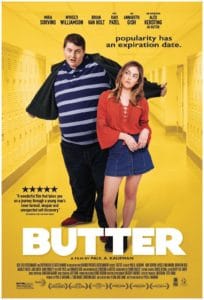 Yet Butter seems to be attempting the same idiom as Fatso, but it’s a story told not nearly as simply and compellingly. Admittedly, this is a tall (shall we say big?) order to live up to, and Butter does have its charms. But, put simply, it’s too uneven.

Most glaringly, Butter relies too heavily on voice over, which in the screenwriting trade oftentimes points up an inability to ‘show’ the audience what a character feels and instead relies on ‘telling,’ which negates any tension or wonder or subconscious connection with the characters and story. Voice over can oftentimes work (see Martin Scorsese), but in the case of Butter it doesn’t feel needed and is an affect that stands out instead of blending seamlessly into the story.

Then we come to Butter’s ‘hook’ (another screenwriting buzz word). A hook is what might pull in the potential viewer by way of a short, ironic description. If you’ve ever heard a movie described as “Die Hard on a …” you know what a hook is, but a movie didn’t always need to have a hook to gain attention or be successful.

Fatso didn’t have a hook. It didn’t need one or want one. But 1980, when Fatso premiered, existed in a far different era of filmmaking. Given how much media is competing for our attention today, movies need hooks more than ever, and Butter, perhaps realizing this, actually has two!

First, Butter is so fed up with his weight and inability to lose it, he announces his intention to eat his last meal on New Year’s Eve and then, presumably, kill himself afterwards—all online. Second, while he plots his last meal, he is also having anonymous, online conversations with the prettiest girl at the school, Anna. Though they know each other in person, Anna is unaware her virtual beau is indeed the obese Butter. He plans to reveal himself to her on New Year’s Eve, the same time he will play out his last meal performance.

Butter’s tone is mainly that of a breezy comedy (think Clueless, which knew how to use just the right amount of voiceover), but the double hook makes what could be simple, tangled. Some parts Roxanne –the would be suitor concealing himself in the bushes below the beloved’s balcony—and some parts Can’t Buy Me Love –the outcast becoming popular but risking it all when his subterfuge is uncovered. Add the suicide angle to it, which is handled seriously for about ten seconds, and Butter is a very busy movie. Too busy. Too cluttered. Trying to take on too much.

Other characters which contribute to this erratic mood are Butter’s mother –conventionally trim and pretty– who continually wants to feed him even though he’s morbidly obese. His father is a former college football jock who has no relationship with his son. And one more jarring thing: Butter’s playing of the saxophone. He’s not just skilled. He’s a virtuoso. Lisa Simpson. Capable of jamming with his mentor and jazz masters.

We are led to believe Butter is only accepted by his peers after his last meal website debuts –and even then no one believes he intends to go through with it—but prior to this we see how talented he is musically, and did I forget to mention he drives a blue Ford Mustang, which would be the envy of anyone? These factors throw off the film’s vibe: yes, he is too heavy, but has he really got it that bad?

Even the name Butter (the character’s true name is Marshall) is hard to decipher. It’s the source of a bad memory, a cruel taunt, but he rolls with the moniker, even likes it, and everyone calls him that, most of the time with praise and not derision. If you peed your pants when you were a little kid, would you embrace everyone at your high school calling you Pee-irre? (Oui Oui?)

Despite these flaws, Butter is a feel-good film, and it will make you feel good with some silliness and a heart that is in the right place. The actor who plays Butter (Alex Kersting) is a newcomer, and a talented one at that. I don’t know if it is actually he playing the saxophone, but Charlie Parker couldn’t do better the way he shreds. Putting aside that unknown, Kersting’s acting and comedic timing show enough promise that we should all keep our eye on this performer.

It’s been some 40 years since Fatso debuted, and if there’s one thing both it and Butter do capture it’s this: being overweight in America is difficult. Despite some strides against body shaming, the opprobrium remains. Perhaps the best way to combat it still is with comedy.