John Ford’s career as a director is defined largely by the western, its brand of rough justice. Martin Scorsese, the mob film and the fascination and repulsion of organized crime. Though I wouldn’t put Judd Apatow in the same category as the former two, it’s increasingly clear that if one needed to characterize a running theme or topic throughout Apatow’s oeuvre of light and off beat comedies it would be the immature male. 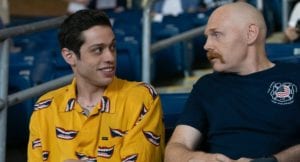 It’s not quite a slacker that interests Apatow, but a man who refuses to embrace maturity all the while having it within him to become more. This kind of journey is at the heart of Apatow’s best films, Knocked Up and The 40-Year Old Virgin.

Knocked Up concerns a stoner who impregnates a woman, normally out of his class, after a drunken one-night stand. Similarly, in The 40-Year Old Virgin, a man-child who has never had sex meets a stronger, more confident woman and struggles throughout the story to reveal his lack of experience.

Now comes what could be considered the third part in this thematic trilogy: The King of Staten Island. The movie works as well as the others and eerily mirrors them.

The story’s protagonist is a 24-year old would-be tattoo artist from Staten Island who just can’t get his shit together. He smokes weed and fools around with a woman who is, unlike him, motivated and focused. For our hero, Scott Carlin, there are some mitigating factors. His fire-fighter father was killed on the job when he was a boy. He has ADD and Crohn’s Disease. He lives with his mother, a rock-solid nurse, and his sister, a strong-willed, off-to-college fire cracker. His friends are burnouts, losers, and petty criminals.

This may sound grim, but The King of Staten Island is signature Apatow. By this I mean damn funny. Scott’s aimlessness and angst is cast against non-stop wit and wisecracks. Apatow manages to make mental illness humorous (though I can see some objecting), but this is a less a story about depression and more a vehicle to help Millennial or Gen X men find purpose.

Feminism has triumphed in Apatow’s telling. The women are strong and steady. It’s the men who have to strive. And persist they do.

Scott’s journey is thrust into overdrive when his mother starts dating for the first time since his father’s passing—some 17 years prior. She falls for a recent divorcee, himself riven with problems. The burdens for Scott are threefold: expel the interloper, admit he can love a capable woman, and make peace with himself.

The King of Staten Island works well because it is in part autobiographical. Pete Davidson, who plays Scott (and co-wrote the movie), lost his fire-fighter father on 9-11. A Staten Island native, he struggled with behavioral issues and Crohn’s disease as a child. He rose above it to become a Saturday Night Live wunderkind. This movie is his breakout role as a lead, and he nails it. He’s a comedian at his core but sensitive enough to carry the more serious moments.

But if you doubt his ability to emote in the dramatic segments of the film, buttressing both his character and his chops as a thespian is the eminent Marisa Tomei, who plays his mother. Tomei has hopped boroughs here, trading Mona Lisa Vito’s (from My Cousin Vinny) Brooklyn burr for a Staten Island drawl. In fact, the accents are so thick in this movie it gave me hope that, as a Bostonian, there will be another local twang to draw Hollywood’s attention for a while.

Brogues aside, The King of Staten Island is a humorous, if potty-mouth, poignant dramedy, and it helps cement Judd Apatow’s reputation as the filmmaker who can best express and empathize with men searching for voices in the 21st century. The movie becomes available on-demand June 12.

Blast Rating: 3 out of 4 stars