In Flanders Fields the poppies blow…

So begins the most famous poem to emerge from the First World War. It was meant to evoke a peaceful setting, onto which death and destruction—on a scale never seen before—had been brought. 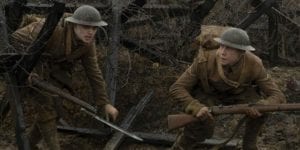 The first  (and last) image of the movie 1917 recalls “In Flanders Fields.” Two British soldiers sleep before a pleasing meadow of verdant grass and bright flowers. Within moments, however, they are summoned for a mission—a journey that will be harrowing beyond belief.

Only the historically astute will know around which battle or campaign the events of the movie take place, but it hardly matters. It’s the spring of 1917 in France. Millions have already succumbed, yet the war grinds on.

Plucked from the mass slaughter and pointlessness of it all are our two heroes who must traverse (or descend) Dante’s hell to save an entire battalion from annihilation. One soldier is acting out of loyalty while the other is reluctant, the perfect dichotomy of why men go to war: some fight for king and country and others because they have no choice.

It’s the latter conceit that defines the movie, indeed most anti-war films. The soldiers in 1917 are cynical and have surrendered to whatever awaits them. Victory and honor are hollow concepts.

Yet in the abyss there are rays of hope, and sometimes more than survival pushes men on. Ironically, the soldier who least wanted to fight is the one who finds his character–an apparent homage to the Mel Gibson, World War One film Gallipoli (among other moments).

The reluctant warrior on a suicide mission is no stranger to the war film, from the aforementioned Gallipoli to James Cagney in the The Fighting 69th to the ensemble cast in The Dirty Dozen right up to Tom Hanks in Saving Private Ryan.

But literature and legend –not film—is where 1917 finds its true fraternity. The movie is almost mythic in tone and presentation, a hero’s journey that brings to mind Odysseus or Sir Gawain. A great journey or quest in which a warrior or knight encounters, on the way to his ultimate goal, myriad obstacles, strange creatures, and frightening places.

In choosing a style to shoot the movie, director Sam Mandes returns from the cornerstones of western storytelling to nuts and bolts filmmaking, and selects as his muse, naturally, Stanley Kubrick, who famously introduced the trench tracking shot in Paths of Glory. However, 1917 goes a few steps beyond Kubrick, for the whole movie is filmed in a single shot.

This is not the first time a film has unfolded without a single editing cut. Russian Ark is the most well known movie to do this, and in the age of CGI (something Russian Ark did not have as crutch) it’s difficult to know if there were edits or not in 1917.

It does stretch belief that 1917 is a single, continuous tracking shot. It’s one thing to have ballerinas and aristocrats on cue to twirl and strut in front of the camera as it passes, as was done in Russian Ark; it’s quite another to have bombs exploding, planes falling from the sky, and trench warfare all go off without a hitch and the director not needing his share of retakes.

Still, the affect in 1917 is rarely conspicuous so caught up in the hellacious journey is the viewer. One could be facile and say the medium is the message; that is, Sam Mendes wished to make the mise en scene the metaphor. War is a long, winding, seemingly unending flow where, in the end, 10,000 men have died to gain just 100 yards of ground. Or maybe that wasn’t his point, and 1917 is simply a terrifying journey with elegant cinematography.

Whether or not you believe the film has a deeper meaning to impart, it is an achievement. Many war films are lauded for their realistic portrayal of battle, but 1917, at times, goes to a more magically realistic or film noirsh place that only masters such as Federico Fellini or Samuel Fuller would recognize. So if you are not moved by the surface story of the picture, you might be more affected by the sublime (or dark) quality of the imagery.

While certain film genres come and go (the western, the romantic comedy), the war film never seems to wane. Perhaps it is because we have hit a number of World War One hundred year anniversaries recently, but ‘the war to end all wars’ seems especially to be in favor these days. 1917 is the live action answer to last year’s wonderful Peter Jackson documentary They Will Not Grow Old.

As with Jackson’s documentary, it appears 1917 was inspired by the stories of soldiers. The latitude will always be greater in a fictional narrative, and the producers of 1917 do not cite any particular soldier as the source, but this is just as well.

Hewing too closely to actual dates and casualty counts would inevitably bring calls of inaccuracy. Mendes and his team rightfully opt to be vague so as to paradoxically bring out the reality of the most gruesome conflict humanity had seen to that point in time.

1917 will surely be honored during award season, and it’s nice to see a film like this after so many Marvel and other franchise movies that are as barren as a no man’s land crater. I wouldn’t rate 1917 quite as highly as the immortal “In Flanders Fields,” but the film makes a strong case to be considered poetry in motion.

Blast Magazine Rating: 4 out of 4 stars

Rating: R for violence, some disturbing images, and language.