It would be a movie-making challenge alone to depict the plight of a teenage refugee from Afghanistan in Switzerland, but the short film Ayaneh does just that while also stirring issues of religion, gender, and sexuality into the mix. 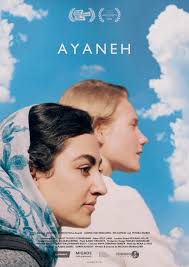 Ayaneh is the name of a teen girl whose devout, Muslim family has fled the chaos of Afghanistan for presumed safety in Europe. But physical security does not mean spiritual, intellectual, and sexual freedom.

Ayaneh enjoys swimming, but, unlike her Swiss counterparts, she can only enter the pool or shower area fully clothed. It is a commandment of Islam to remain covered, but to Ayaneh it is limiting. She wants to shed not only clothing but also chauvinistic tenets and practices that shackle her expression of self.

These feelings only intensify when Ayaneh meets Anna, a bare-shouldered, blue-eyed Swiss miss who swims gracefully and sensually at the pool. Their relationship is innocent at first, but when Anna gifts Ayaneh a western-style swimsuit (and she wears it), her family declares she has dishonored them.

But there is an even deeper taboo that Ayaneh can never reveal or dare to share with her traditional family: in her dreams, she longs for the embraces of Anna.

On a very simple level, Ayaneh is an immigration story, a clash of cultures. But writer-director Nicolas Greinacher skillfully layers the film with questions. What are the trade-offs families fleeing oppression in a foreign land must make when they find sanctuary in a society that does not prize its values? Will the youth of traditional Muslim families be able to honor their predecessors while also fulfilling wishes and desires that would never be granted them had they remained in the land that birthed them?

The film does not seek to answer these and other questions conclusively, merely raise them. There is no finality, only a sense that things cannot go on the way they are. It is, perhaps, tragic, while almost certainly inevitable in increasingly globalistic times.