A movie is a reflection. Light bounces off an object and is captured by the camera’s lens and printed on film. 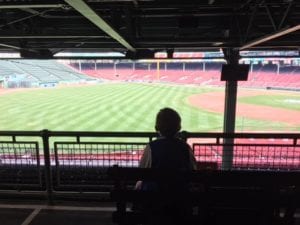 Reflecting on the past and the present

On August 13, 2019, along with my sons, I attended “Movie Night at Fenway Park.” Not only was it an enjoyable evening, but it also became a chance for me to reflect on Fenway Park and the Red Sox organization over the last twenty years. Let me explain…

I became a Red Sox season ticket holder in 1999. The late 90s had been rough for the Olde Towne Team, and Fenway Park itself was in desperate need of renovation. Back then, sports radio was consumed with talk about redoing the park or –dare we say it—relocating the team elsewhere in Boston with a fancy, new stadium. Such a park would have every modern convenience they said, and we’d soon forget about that old Fenway charm.

Little did I know when I got my ticket package what the 21st century had in store for the Sox, and I was there for just about every memorable moment. But in those twenty years, it’s not just the thrill of four World Series championships that stand out—though they are certainly paramount. Fenway Park itself has undergone significant changes—and not just physical ones.

In 1999, the Yawkey Trust still owned the club, and even as a lifelong fan I have to admit, ownership’s relations with the faithful was, at best, strained. The attitude was from another era, one where the fan should count himself or herself lucky to be allowed admittance onto hallowed ground.

All that changed when the new ownership, led by John Henry, Tom Werner, and Larry Lucchino, took over in the early 2000s. They brought in Theo Epstein as General Manager, and baseball history was soon changed.

But it was more than hiring great baseball minds to produce winning teams. Those long overdue physical improvements to Fenway began as well. The monster seats and the right field roofdeck were added. One could see a game at dugout level or from the Bleacher Bar restaurant in center field. All the main concourses were opened up with indoor seating and breeze machines available if the day became too hot. Everything got a face lift. 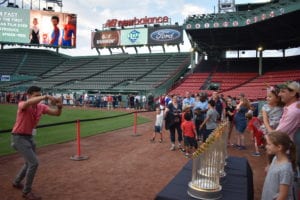 Alongside these upgrades, there was a vibrant new attitude on display from management. The old regime eschewed modern methods regarding customer relations and public outreach, but the new comers had all the right moves and looked upon the fans not as supplicants but as undecided voters to be won over.

Earlier this year, season ticket holders were invited to take batting practice on the field. This is the dream of every New England kid who grew up a fan, but it was simply not possible until recently.

In fact, until I was perhaps 30 years old (I’m 46 now) I had never set foot on the field, sat in the dugout, or seen the locker room. Both my sons, under ten years of age, have already been able to do this several times.

For them, Fenway is not just a place to be viewed from a distance, from the height of the bleachers or the grandstand. Their relationship with the team and the legends is far more intimate than was mine growing up.

These special events truly underscore the new management’s understanding of how to conduct baseball business in the 21st century.

For most of Fenway’s existence, when the team was out of town the park was locked up and silent. The last day of play in the fall, whether regular or post season, was it for the ballpark until the following April. Each year, Fenway was alive for 81 home games (and perhaps a few post-season ones), and that was all.

But with the new ownership came new ideas and approaches. When the team was on the road Fenway was made available for concerts from the likes of Paul McCartney, The Who, Bruce Springsteen, The Rolling Stones and Def Leppard—to name just a few. English Premiere League Soccer games were played on the turf in addition to the Irish sport hurling. Even in winter, Fenway was far from just the tarp and a pile of snow. Hockey games, extreme winter sports tracks, and more kept the park open and active.

It also comes as no surprise to me that in the last 20 years, concurrent with the new ownership’s arrival, Kenmore Square and the area around Fenway Park have undergone a magnificent revitalization.

Where once there were old buildings or nothing at all, now there are high rise apartments and a slew of new restaurants. Boston University and the city itself have gotten in on the act, too. BU has bought up much of Kenmore Square and seems to be erecting one beautiful facility after another. The City of Boston completely overhauled the Kenmore transit stop with a glass structure that looks more Louvre than MBTA.

All of this is a long winded way of applauding another event the Red Sox and the Fenway Sports Group have added to summers at the ballpark. Since 2013, the team has hosted “Movie Night at Fenway.” Films shown have included family favorites such as The Sandlot, Ferris Bueller’s Day Off, and Jurassic Park. The 2019 edition was the animated film Spiderman: Into The Spider-Verse. 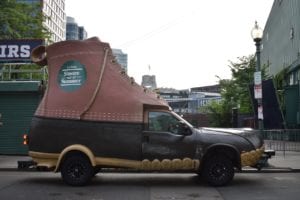 This year’s event was sponsored by L.L. Bean and featured lunch box giveaways and other goodies, in addition to a visit to Jersey Street by the giant, L.L. Bean shoe-car.

Rain and potential thunderstorms threatened the entire day, but by the time the gates opened at 6:45pm, only light, wispy clouds painted the sky above Fenway.

Families of all shapes and sizes streamed in to gobble up concessions and walk around the field’s warning track. Kids and parents could take pictures in the dugouts, beneath the scoreboard, and with this century’s four World Series trophies, which were on display in right field.

At 8pm, everyone settled in for the movie, which was displayed on the center field jumbo screen. Moviegoers sprawled out across the infield boxes and grandstand seats with sound piped in from speakers.

As the light dimmed in the sky, temperatures cooled off which made for a pleasing atmosphere in which to watch the exploits of a New York teen named Miles, who, like Peter Parker is bitten by a radioactive spider and begins to assume the powers of an arachnid.

Spiderman: Into The Spider-Verse features one of the great comic villains, The Kingpin, and young Miles needs to learn and tame all of his powers quickly as the baddie has plans which could destroy the entire city.

The typical story of a young superhero coming to understand his power is intertwined with a plot that features a rupture in the space-time continuum that allows other iterations of Spiderman (from other universes) to come together to save the day. There’s humor, thrills, and superb craftsmanship in this film, which required a record number of animators to design and produce.

For me, the night was less about the movie (as fun as it was), and more about the trip down memory lane and musings about what baseball and Fenway has become. The Red Sox and their wins and losses will always be the star around which everything orbits, but in the past twenty years, Fenway Park has come to mean a lot more than nine innings and a hot dog.

For many, it’s these other events which define the stadium’s place in the city and region, and there’s no doubt that Movie Night has helped Fenway to achieve this enhanced identity.

What will the next twenty years hold for the team and the park? That is a question worth asking and another reflection worth having when the time comes.