Frostpunk, 11 bit Studios’ spiritual successor to This War of Mine, will release on April 24 for PC.

As the ruler of the last city on Earth, Frostpunk tasks you with managing the scarce resources at your disposal in order to survive a 19th century ice age. You will have to make difficult choices while balancing the hope and discontent of your citizens. Of course, since this is from the same guys who brought you one of the most depressing games I’ve ever played, This War of Mine, the choices you have to make are never pleasant. Do you bury your inevitable dead while wasting manpower on traditional cemeteries or do you just drop them in a pile far away from your settlement? Or do you use the dead bodies as a source of sustenance that while hiding it from your populace?

Frostpunk will release digitally for $29.99 and in physical retail in the form of a special Victorian Edition priced at $34.99. The Victorian Edition comes with a “New London – The Art of Frostpunk” hardcover book that showcases the games beautiful steampunk art style. 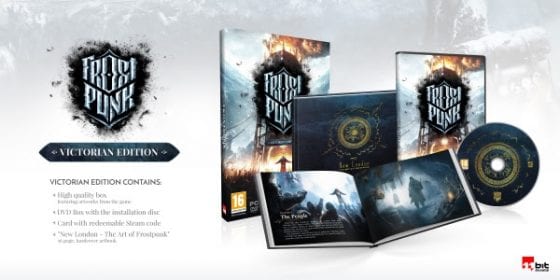 “We wanted to make it before end of Q1, but we ended up slightly moving the release further. The reason is simple – we needed this time for the final polishing required to deliver a game that, we believe, is the best 11 bit title so far. For us, production value is always the most important thing and a bug-free, carefully-balanced game is crucial to offer gamers the experience we want them to have. This War of Mine was a unique game about moral choices, and with Frostpunk, we are bringing this to a whole new level. It’s true that it took us some time to get here, but I’m happy to say that it was worth it!”

Frostpunk will release on Steam on April 24.