Antihero is a turn-based strategy game that invites you to delve into the seedy underworld of Victorian England. As the leader of a thieves guild, your job is to infiltrate several businesses and earn enough notoriety to drive the competition out of the neighborhood. It is a battle of strategic territory control, resource management, and brutish tactics that successfully distills complex 4x game mechanics into a fast paced digital board game.

The game does a great job of slowly escalating during each turn and letting you adapt your strategy according to what resources are available. When you start, the majority of the map will be hidden from view, meaning your first few turns will involve your master thief scouting the area and uncovering what kind of businesses are in your vicinity. These businesses can be infiltrated by an urchin, a young boy that will take a cut of the resource the building produces for your guild. There are two main resources, lanterns and gold. Lanterns can be used to unlock upgrades and new units while gold is used to purchase those units once unlocked. Prioritizing what buildings to occupy based on what resource they will produce is the key to coming out on top. Furthermore, buildings can be upgraded once three urchins inhabit it, yielding more resources or crucial victory points.

Antihero would not do Dickensian England justice if it did not include mustachioed gangs roaming the streets. On the offensive end, you can purchase gangs to battle your opponent’s gangs or evict urchins from buildings. Every time a gang successfully completes an action, you can choose to upgrade the damage it inflicts, the gold it yields for each kill or how many urchins it can evict at once. You can also use thugs to add hit points to your gang and make it a massive unit that can be very hard to take down. Thugs can also be used as passive roadblocks that need to be dealt with in order to go down a path or enter a building. Since gangs can only do one action per turn, the smart placing of thugs can really slow down the progress of your enemy. 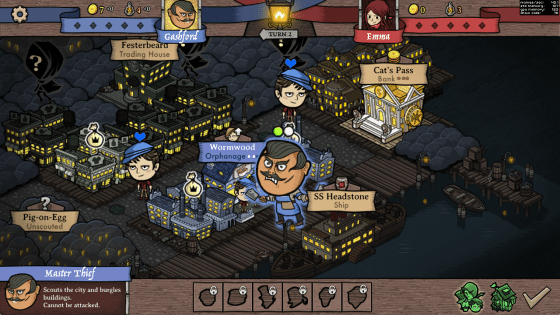 There are also a few specialty units that can swing the tide of the match when used correctly. Assassins are a very expensive, one-time use killing machine that can single-handedly eradicate a large gang or a marked target for a victory point. Truant officers can also be used to fully evict a building and saboteurs can directly counter that by placing a trap in a building and leaving the unit that triggers it stunned for one turn. There aren’t clear-cut “rock paper scissors” counters to every character. For example, captured buildings can be taken over by either a gang, truant officer, or leveled up urchin. The flexibility to handle any situation is what makes Antihero a fantastically accessible game that where you rarely feel you can’t get out of a situation.

At the same time, you will quickly discover that your strategy for each match highly depends to what buildings spawn next to you. Most buildings yield particular resources, but special buildings like the orphanage or strangefellows club can actually make your units cheaper. That means you might start spamming more units rather than upgrading your master thief if the occasion calls for it. Also, the choice between spreading out to new buildings or adding more urchins to your existing buildings to unlock upgrades is a tough call. Not to mention if you upgrade the church, the victory point you earn is visible to your rival, meaning they will be hunting it down to get your urchins out of there. Knowing when to expose your units is probably the more entertaining aspects of deceiving your enemy. While you explore the map you will see little red footsteps where your rival has been. That tells you they will see any unit that walks through there. Sometimes, when you have a really big gang that might be vulnerable it is best to keep them in the shadows until you are sure they will be too hard to kill. It makes every move you make a measured affair. 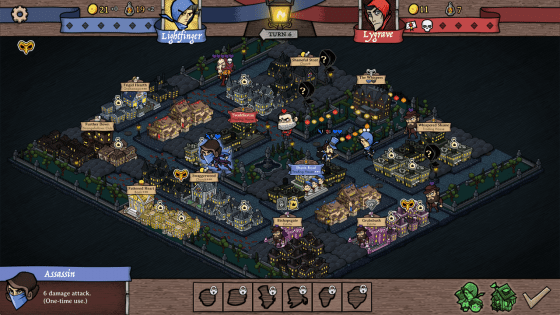 After every turn, you have the chance to purchase an upgrade using lanterns. The three upgrade trees can be roughly defined defensive, offensive, or focused more on scouting. While upgrading is key to winning a game, you can also choose to cash out and receive more gold or lanterns instead of upgrading, continuing the trend of flexibility in every aspect of the game.

All of this spying and infiltrating has a purpose, and that is to earn victory points faster than your opponent. These can be earned by earning blackmail from a fully upgraded church, buying a bribe with enough lanterns, assassinating a target, or completing special objectives on certain maps. Usually, these involve some special loot to gather but sometimes you might get something interesting, like stealing invitations to a mascarade ball and sending your agents in to earn victory points. The map variety further switches up the strategies, while not negating the ones that worked previously. 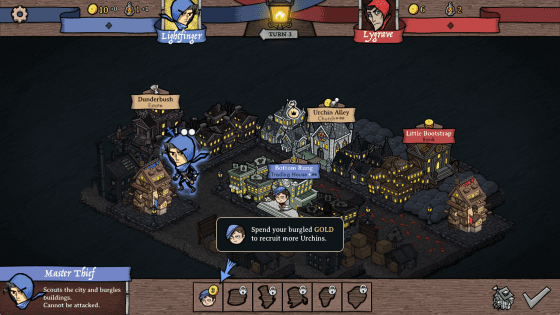 Despite the outward complexity, the game is really easy to play once you get the hang of it. There is a story mode where you are given a solid tutorial of the mechanics in the first few levels and are finally let loose to experiment about half way through it. The later levels have some great twists, like making urchins very expensive, or having you earn victory points in an unorthodox way. It can take a few hours to complete and you will feel well versed in the game to tackle the online component once you finish. Online can be tackled asynchronously with each player being notified via email when the other has taken their turn, or joining a live match where you will be paired with someone until either one of you wins. The latter way is the more entertaining of the two but nothing beats doing some hot seat action in local multiplayer. Either way, the game is clearly designed with mobile in mind and feels a bit clunky when translated to the PC realm. 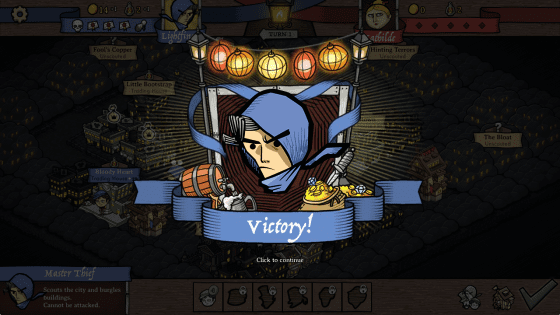 While the game is deeply entrenched in the nastier side of English nightlife, the art style is strikingly charming. The characters have an addictive hand drawn style that instantly grabs your attention and their voice work rarely gets annoying. The same can be said for the soundtrack, that does its intended job of staying out of your head as you plan your next move.

Antihero succeeds at translating some of the more complex systems found in the 4x strategy genre and placing them in an easy to understand digital board game. Not to mention the game is a joy to play and look at thanks to its beautiful art direction. While the campaign might be short and the game does have a general “mobile” feel to it, the games are diverse and can be finished pretty quickly when played locally. The fact that I rarely felt overwhelmed or without any options during a match is a testament to how well structured Antihero is. It might not be the deepest strategy game but it is churning on al cylinders where it matters.