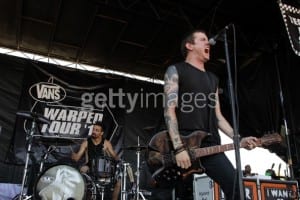 Lead singer Tom Gabel of the rock band Against Me! came out as transgender to Rolling Stone Magazine on Tuesday.  Gabel plans to take the name Laura Jane Grace and will begin presenting herself as female while undergoing hormone and electrolysis treatments.

Gabel’s wife plans to stay with her through the transition, which Gabel revealed was her biggest fear about coming out.

“For me, the most terrifying thing about this was how she would accept the news,” says Gabel, according to Rolling Stone. “But she’s been super-amazing and understanding.”

Gabel is the first major rock star to transition, which has encouraged her to be open about the process.

“I’m going to have embarrassing moments,” Gabel told the magazine, “and that won’t be fun. But that’s part of what talking to you is about – is hoping people will understand, and hoping they’ll be fairly kind.”

A full article about Gabel’s transition and what that means for the future of Against Me! will appear in Rolling Stone on Friday, May 11.