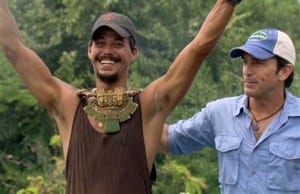 Boston Rob outwitted and outlasted the other players, virtually running the game over season 22 of the reality show.

“It was Amber that encouraged me to come back and try again,” he said after winning, referring to his wife. “She believes in me.”

“Survivor” host Jeff Probst said Boston Rob’s playing was “as close to a perfect game as anyone has ever played on ‘Survivor.'”