Aaron Alcouloumre doesn’t believe in limiting himself. The 19-year-old Colorado College musician recently released his first album, The Analysis, after countless hours of songwriting and production. Not only does Alcouloumre embrace his traditional role of trumpet player on his 10-song compilation, he also plays the flugelhorn, trombone, keyboard, drum pad, bass and synthesizer, as well as providing vocals for many of the tracks. For Alcouloumre, music is a form of self-therapy that provides an emotional release not found elsewhere.

This past weekend, Blast Magazine spoke with Alcouloumre about his creative process for writing and recording each of the songs on his debut album, The Analysis.

Blast Magazine: How did your musical journey first begin and how do you think those early experiences shaped you into the musician you are today?

Aaron Alcouloumre: I started with piano lessons when I was 6 or 7 years old. My piano teacher was very straight to the point and wanted everything to be extremely structured. Even then, my practice habits were definitely a sign of my personality. I would never practice the pieces he assigned; rather, I would improvise every day for hours on my own. I loved to practice my own ideas and try out my own sounds. Those practice sessions had a definite impact on how I hear melodies now. That was definitely the beginning for me. 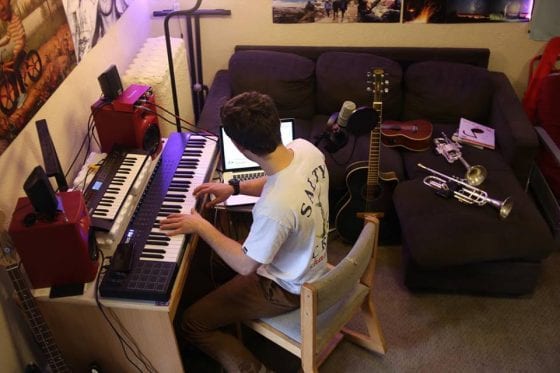 Blast Magazine: What was your process like when creating The Analysis? Did you have a set vision of how you wanted the whole album to go together or did you focus more on the sound of the individual songs?

Alcouloumre: It was a very organic process in the sense that I didn’t force anything. Last year, I was dealing with a lot of stuff and writing music all the time. One time, I pulled an all-nighter to write a song and called in a friend to sing at 2 in the morning. We finished three hours later and released the song. I realized that it was a great form of self-expression and wanted to do it all the time. I learned how to record and play more instruments and began to write a lot more songs. I spent 3 months last summer producing one song, which was a colossal amount of time, but it was a learning process for me. I didn’t know how to use the technology aspect of things as well as I needed, and this album gave me the opportunity to learn. Last summer was also when I decided that I wanted to be a musician full-time. I tired other majors which didn’t make me happy and I spent all of my time practicing music anyways. A big part of this album was me fully delving into music. I got really good at trumpet, learned more piano, and got better at guitar, bass and trombone. I also started taking voice lessons and learning about different music styles. I initially wanted to release an EP by the end of the year but as I started to write more music, I decided to set a bigger goal of releasing an album with 9-12 songs. I ended up with 10 songs for the album.

Blast Magazine: Your album is made up of songs that all seem to have their own unique sound. Was that a conscious decision or just the result of your creative process?

Alcouloumre: Most of the songs aren’t really connected. There are two songs that represent a concept from two different perspectives and those are connected. However, my songs were usually inspired by something and I would just write for hours until a full song structure was complete. When I came to the end of the album, one of my friends recommended listening to the whole thing at once. It was cool to hear that there actually was cohesiveness and a natural storyline that showed up. When working on this album, I didn’t sit down and force myself to write songs about specific things. I just wrote music all the time and out of 200 songs, I kept 10 that stuck with me and that I fell in love with.

Blast Magazine: You were involved in every aspect of this album, from the songwriting to the vocals. Now that the album is released, have you come to realize that you enjoy being a part of each step or would you prefer to focus on one particular facet in the future?

Alcouloumre: I have two mindsets about that. On one hand, I definitely want to understand the whole process of writing music and I really enjoyed doing that. On the other, having so many people featured on this album taught me that a lot of my best work comes from collaboration. I don’t need to be in control of everything, but I want to feel like I have the ability to do anything on the album. I want to know how each step works and not be single skilled.

Blast Magazine: The cover art for this album is vivid and eye-catching. What was the idea behind that image and what does it represent?

Alcouloumre: My friend Victoria made the album cover out of pictures that I had taken. We tried to figure out what the sound represented visually. The two photos that make up the album cover are of the actions that bring me the most peace, camping and playing trumpet. I feel the greatest sense of peace in my life when I play trumpet. When I analyze things, it’s important for me to step back and remove myself from the situation and the image of me looking up at the stars out in nature represents that. I express my issues best through music and that’s reflected in the image of me playing the trumpet.

Blast Magazine: What is the most important lesson that you’ve learned from making this album and how will you utilize it in your future work?

Alcouloumre: I’ve learned that the best time to do anything is now. I went into this process thinking it was too late. I’ve always been a good trumpet player because I worked hard at it but I never had the confidence to produce my own music, even when I saw others doing it. I realized that if I didn’t start working at it, I’d never know if I could do it and always be curious. I’ve come to realize that the best time to do anything is the second you have that initial thought. You can’t allow yourself to be stuck in your own doubts and you have to keep working on things. This whole album was definitely self-therapy for me.

Blast Magazine: Now that The Analysis has been released, what can we expect from you moving forward?

Alcouloumre: Since releasing The Analysis, I have finished 6 more songs and I’m working on more now. I also play trumpet and write music for a funk band on campus. It’s a different overall style than my personal music. We get cool gigs and we are opening for Noname in a few weeks. My current focus is on working on the live performance for my own music. I am trying to figure out how to perform my music live in a way that brings together electronic music with live performance, which is a big thing I would like to master over the summer. I need to make a decision on whether I’d like to have a structured performance or just reference my music in my live performance. I’d like to find a mix between the two because it’s definitely important to connect with my audience.

The Analysis can be found at https://soundcloud.com/aaron-alcouloumre/sets/the-analysis.