and size. Walls are lined with black and white prints, colorful paintings and text

drawings. On a cabinet sits a sculpture he made in college and a set of three bibles,

one made of glass, one of beeswax and one of bronze. On his desk there are

wooden and metal signs sit on the floor and lean against a wall.

The pieces kept in this space are from countless shows and installations,

but work together as an exhibit in itself. His creativity and curiosity are clear from

the variety of materials and styles used, while every piece of work is connected

by two clear themes: religion and sexuality. Growing up as a gay alter boy, one

may expect these themes to be in conflict, representative of inner turmoil, but

“I was one of those people who was like ‘No, I can be gay and I can be

Catholic,’” says Keller. “But I was also one of those people who was just like. ‘Fuck

Keller, 37, is of medium height and somewhat stocky build. He has short

dark hair, a scruffy beard and is dressed in casual jeans and a black pullover fleece

him. He is humble, and speaks about his work with genuine excitement. He picks

up one of the cubes from his desk, which is about an inch and a half wide and

consisted of rosary beads suspended in beeswax. He made thousands of

these for his last show at Galatea Fine Arts, a gallery located down the street

Keller grew up in Rock Springs, Wyoming. When he was six, he moved in

with his grandparents because his single mother was young, and temporarily

unable to care for him. However, during this time the family remained close and

Keller moved back in with his mother when he was 14. His grandparents were

devout Catholics, and he grew up going to church regularly. His mother was not

as devout as his grandparents, but now does attend church regularly. At this

point in his life, Keller only attends church when he returns home, but does

consider his faith an important part of his life.

what is right,” says Keller. “But I think [my art] is going beyond what morality is

and how it affects people.”

His mother, Roberta Townsend, knew Keller was an artist from a very young age. He came

from a line of accomplished artists, with three generations of grandmothers who

painted and a mother who was an art and art history major. Keller painted while

A triptych of Jesus on the cross that Keller created in high school, which

stood out specifically to his mother, gained recognition as well. It won a

Congressional Award and was displayed in the State House before being

purchased by the Rock Springs Community Fine Arts Center, where it remains

When Keller came out as gay to his family at the age of 22, he received

nothing but support, and the reaction to his art was always the same. His mother,

Roberta Townsend, admitted that her father may have been slightly

uncomfortable with some of religious messages in his work at times, but no one

ever expressed anything but praise to Keller himself.

“No, I never thought [his work went too far],” says Townsend. “But that’s

because I’m educated, so I know that whether or not I like it or it speaks to me,

the artist is making their own statement.”

University in Fort Collins, Colorado, and graduated with a degree in printmaking and

sculpture. Gary Voss, who is now chairman of the arts and art history department

at CSU, was Keller’s sculpture professor during his junior year at the school.

While Goss had not talked to Keller since his time at CSU, he immediately

recognized the name and pulled up his class evaluations, which Goss saves for

every student. He saw exceptional potential in Keller while he had him as a

elements of a piece into a finished work. After reading his notes, Goss looked at

he made in college.

with me,” says Goss. In one of Keller’s evaluations from sculpture class, Goss

wrote, “I was afraid you bit off more than you could chew but you pulled it off. In

the end, everything would pull together and work out quite well.”

strengthen and gain focus over the years.

“His work today is far more sophisticated and has a broader reach,” says

Goss. “It was clear that religion would form and inform the pieces at that time but

it has developed since.”

Keller intends for his work to make the viewer think. When he was growing

up, he was inclined to create pieces that pushed the boundaries; often doing so

by creating dark, religious images that skirted the line of sacrilege.

He continues to enjoy pushing the same boundaries, but now with the

describes him as “a very refined provocateur,” further explaining that Keller “likes

and knows how to start a conversation and that this is evident in his work.” Keller

and Boissonnault met at one of Keller’s art openings about a year ago.

“His studio was playing the best music,” says Boissonnault. “I dropped in

As a self-proclaimed “recovering catholic,” Boissonnault felt a strong

connection to Keller’s work. Keller does not intend to draw people away from

religion, and is careful to avoid cultural appropriation. He tries to let viewers come to

their own conclusions. Keller himself does not have a negative association with

religion, even saying he still considers getting married in a Catholic church.

“Art is not answering any questions. In art we ask questions, and one set

of questions leads to other questions,” says Voss. 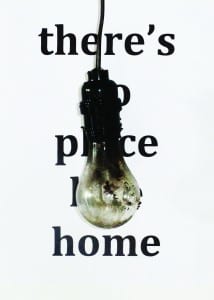 A piece by Keller

Keller is a member of five artist organizations, including galleries and

cooperatives around Boston, and aims to always be showing something at at

least one of the studios. He recently had a piece in a show at Midway Studios in

Fort Point for Design Week, and participated in the SoWa Artist Guild’s Salon

Sunday, an annual open studio event at their space located at 450 Harrison Ave.

The piece he displayed at Midway Studios was entirely black and white,

and consisted of two canvasses hung next to each other, one with “wish” printed

many times so the word overlapped itself, and the other with the same word only

printed once in the center. On one side of the canvasses, painted white light

on the other side. This piece is indicative of Keller’s simple, yet inventive style.

and the Fort Point Community of Artists, while also working full time in the

marketing department of Whole Foods. He hopes to one day be able to focus all

his time on his art, but in the meantime, he spends his days off in the studio or

“I think I need to be able to make way more work,” said Keller. “But that is

that I have more freedom.”

Keller met his boyfriend of six years, Matt Forgit, soon after moving to

Boston. Forgit was not particularly interested in art before meeting Keller, but has

since developed a love for the opportunity for individual interpretation, which he

ambitions, and credits some of the success of their relationship to their ability to

“I know first-hand how hard he works at it,” says Forgit. “He is tireless…

so he doesn’t just throw it all together, he works really hard at it and puts a lot of

thought into it. I know that he has to work hard at it, and it is my job to support.”

While time doesn’t always allow it, Keller attempts to have at least one

confident that something will come together.

“I think he’s a dynamo, and wise beyond his years,” says Marjorie Kaye,

the originator of Galatea. Keller showed interest in the artist collective when it

was first opening and joined soon after. “It is rare to find someone with that much

forward thinking and ambition and yet who is so humble at the same time.”

Keller sells work at every show he participates in, though most of his sales

have been through his SoWa studio space. While he does hope that his art

eventually becomes his full-time career, he is happy to be just be making art and

proud to have a studio in Boston.

When asked what his proudest artistic accomplishment is, Keller replied, “I

guess just being here and having the studio, and being involved in so many