If you’ve ever wondered why the name Steve Aoki is synonymous with the concept of success in the electronic dance music industry, buy a ticket to one of his performances. From the moment he takes the stage, Aoki exudes a confidence one can only gain through hard work and years of experience. He commands the attention of everyone in the room and has an inexplicably powerful presence which he utilizes to ensure that his audience is not merely voyeurs, but active participants in all aspects of his show. Aoki’s talent and flair for theatrics were on full display last week during his performance at the Fox Theater in Oakland, California as part of 99.7 Now’s fifth annual Electric Bounce House.

While one may expect Aoki’s one-hour set to have been a non-stop party filled with cake throwing, champagne pouring, and bass thumping, it actually began in a much more conservative and settled manner. Aoki took the stage in complete darkness with only the screen behind him to illuminate the room. While the crowd stood with bated breath, the previous illustrations on the screen of a mystical forest disappeared and in its place, flashing letters appeared, which would ultimately spell out “Steve Aoki.” The crowd continued to wonder what musical journey they were set to embark on when suddenly, white confetti shot out from cannons in the corners of the room and strobe lights circled the room. Aoki then continued in the secretive fashion of keeping the room in total darkness for the first 10 minutes of his set, giving the distinct impression that he wanted his work to shine and take the attention, rather than himself. 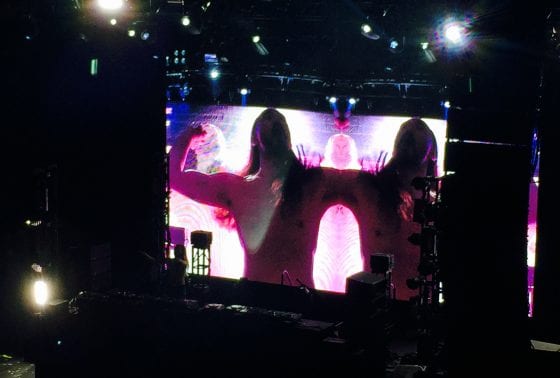 Aoki then continued his performance by alternating between newer hits and older works, only pausing to put the audience in his Snapchat story and explain how much he loved coming back to the Bay Area. As his performance reached its halfway mark, Aoki explained to the crowd that he wanted to play his biggest song and delved into a performance of “Just Hold On,” his track with One Direction’s Louis Tomlinson.
Aoki has a talent for being able to mesh seemingly unrelated musical styles into a cohesive, beautiful performance. He utilized this gift in his remix of “Bored to Death” by Blink 182, with the background imagery alternating between the band’s original video and images of Aoki shot in a similar style.

At this point in the show, Aoki had already been able to get a massive theater full of concert-goers to jump and dance for over 30 minutes. However, he wanted his audience to do more than just watch and admire; he wanted them to be a part of the show. He explained to the audience that he had been videotaping crowds all over the world going crazy and hadn’t had the opportunity to include Oakland yet. Aoki went on to explain that the audience needed to keep an eye on the videographer to ensure that Oakland made it in as one of the more “turnt” cities in the world. He put up the lyrics to his next song behind him, which ensured that no one would feel left out and all would be able to participate in the audience activity. As the chorus approached, Aoki took off his shirt and walked to the edge of the stage, where he sang along with the crowd and touched as many attendees as he could reach. Each time the chorus approached, Aoki would be just as energetic as the audience before him and lean into the crowd, allowing the lucky individuals in the front row to feel as if they were experiencing a private show just for them.

As he went back to the stage to continue his performance, it was evident that the mood of the show was about to take a turn for the exciting. Aoki began to get even more energetic on stage, jumping around intensely while his name flashed in various fonts behind him. Just as he had done in previous cities he had performed in, Aoki had his security guards hand out signs to the audience members in the front, which when held up, spelled “Oakland”. He had his photographer take a photo of him in front of the audience, with the letters clearly visible behind him.

The remainder of Aoki’s show continued to be visually and musically addicting. His song transitions were seemingly flawless and the release of white confetti and fog into the crowd as the audience danced with looks of pure joy on their faces was enthralling. In one of the most entertaining moments of the evening, Aoki explained that he wanted to bring the craziest fans on stage with him and had his security bring up four girls who got to stand and dance next to him while he performed. Although three of the girls exited the stage immediately once it was evident that their time in the spotlight was coming to an end, one of them was not ready for the moment to end and ensured that she got a selfie with Aoki before being pulled away.

Once the selfie debacle had ended and Aoki had the stage to himself again, he showed off his unique talent once more with a fantastic remix of My Chemical Romance’s “Welcome to the Black Parade,” which he dedicated to “all of the emo kids.” It became evident that the show was coming to a close when Aoki brought out one of his most infamous performance accessories, the champagne bottle. He sprayed multiple bottles of champagne on the crowd and drank the remaining liquid after.

Aoki ended his show with one of the most comforting and beautiful moments of the night. He had everyone wave their phones in the air with the flashlight on and played the song “What We Started,” an inspiring and uplifting melody created by Aoki and Don Diablo. The lyrics seemed to resonate with every individual in the audience as they sang along with Aoki to the chorus, “This is what we started, they can’t hold us down, they’ll never be us.” As the song came to a close, Aoki thanked his audience for an incredible night and it was evident on the faces of every single attendee that they felt immense gratitude towards him as well. 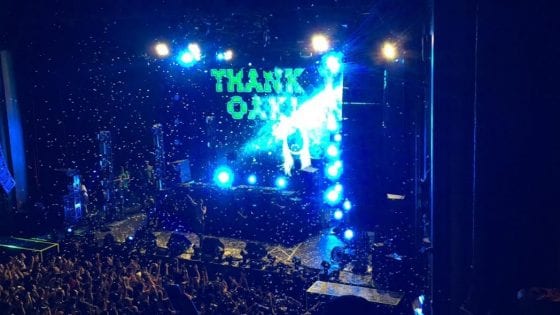