Death Squared is a charming co-op puzzle game that infuses precise teamwork to frustrating trial and error level design. It draws several parallels between the Portal series in both tone and structure but doesn’t have as many unforgettable moments as the seminal Valve series. However, its clever puzzle structure paired with the spontaneity of bringing other players to help gives Death Squared just enough to stand out in a crowded genre. 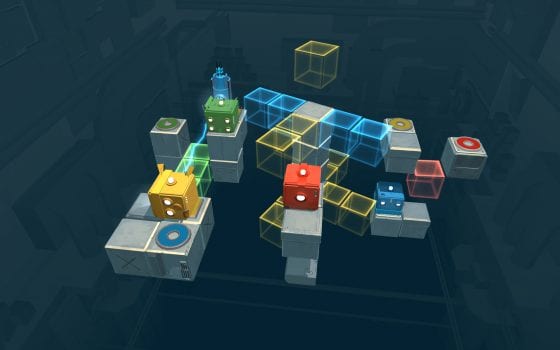 If you’ve played a puzzle game in the last 20 years or so, you’ve probably seen the kind of head scratchers Death Squared has to offer. You have two cube shaped robots, one red and one blue, that have to traverse a perilous platform and reach their respective activation points. Throughout the level are several hazards like laser beams, sharp spikes, and the ever-present threat of gravity chastising any error you commit. There are a few ways to play, a story mode that you can tackle by yourself or with a partner, and a four player party mode that has levels designed for four players. For an extra difficulty spike, you can also tackle The Vault where some of the strangest puzzles the game has to offer exist. What is interesting about each of the game modes is that there is no real scaling to the difficulty. Early on you will see new obstacles introduced at a normal pace, with each level growing a little bit more difficult than the last. But at around level 20 or so the difficulty was unpredictable. Some levels caused me to die several times and took me close to ten minutes to solve while I was flying through others later on. The uneven difficulty balance can be a welcome relief when you have a partner and get “rewarded” with an easier level after playing through a tough one, but it is kind of weird to see in a puzzle game.

Despite this, Death Squared still stands out since you can play the entirety of it with a friend. In fact, trying to play it by yourself will involve controlling each of the cube robots with a different hand. Not even the most ambidextrous person around can do this without a few accidental deaths. Thankfully, bringing a friend into the fold helps even out the brain cramp you would get otherwise. Just make sure you are able to argue with whoever you pair up with. For one, it only supports local co-op and the puzzles sadly often rely on trial and error. For example, when the red player hits a button, it might activate a platform or cause spikes to shoot out from the floor and murder the blue player. There is no way to guess this other than just pressing the button and hoping for the best. Considering death leads to a full level restart, it can get frustrating.

Along for the ride is the disembodied voice of an entry level employee who is overseeing the testing area where your robots solve puzzles. He has an AI companion who oozes the same robot superiority as GLaDOS and will quickly shut down his musings. Their back and forth is entertaining and I rarely heard repeated statements, even after I was dying multiple times per level. In between levels you can also gather the semblance of a Portal-like twist, possibly hinting that the test you are doing are not the most ethical. While not quite as sinister as what happened at Aperture Science, the dialogue was very well delivered and made me chuckle a few times. 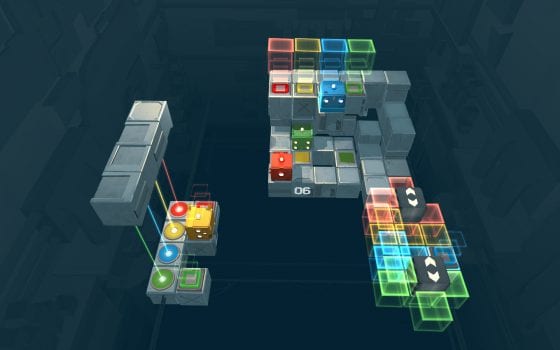 There will be people who get a lot of use out of Death Squared. The game is designed with local co-op in mind and takes a ton of communication to get right. It doesn’t involve any heavy handed controls or complicated mechanics to understand, meaning anyone can play it. At the same time, the enjoyment you get out of the game will be directly influenced by who you are playing with. The only way to figure out certain levels is through a frustrating cycle of death and repetition. If you or the person you are playing with don’t have the patience for it, it can get grinding really quickly. However, despite its flaws, Death Squared still manages to eek out an interesting niche in the puzzle game market. 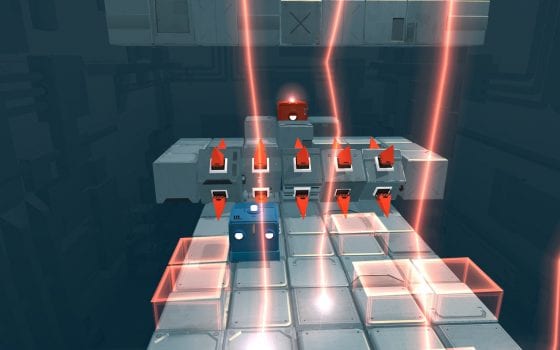