Word around the galaxy is that The Force Awakens, episode VII in the Star Wars saga, is not as good as episodes IV through VI (could anything be?), but a step above the later films or so called prequels, episodes I through III. If you don’t know much about the Star Wars universe, the preceding sentence will likely confuse you. Unfortunately, confused frequently I was (get the joke?) by The Force Awakens, and I would have to rank it alongside the prequels in terms of ham-handedness and disappointment. 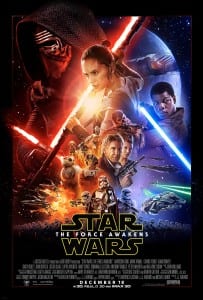 Long, long before I was confused, I was troubled—in fact, from the very outset of the movie. The opening crawl of text in The Force Awakens tells us that we are picking up some thirty years after The Return of the Jedi and Luke Skywalker has gone missing. The bad guys, known as The First Order, are trying to track him down to kill him, while the good guys—the Resistance— need him more than ever.

This got me to thinking about history, American history specifically. Imagine if after defeating Nazi Germany and Imperial Japan, Harry S. Truman had gone back to haberdashery. So much was invested in seeing the dark side defeated and the Empire crushed, to open with the notion that Luke, perhaps the greatest hero in movie history, has packed it in after some frustrating times felt like the worst possible way to begin the next chapter. The rest of the movie’s plot I’ll leave to the nerds to dissect. In brief, the dialogue and the exposition are clunky and the characters are unapproachable, even those resurrected from the original films. It’s not even good enough anymore to say “weak story, but it looked great.” In the CGI age, all films look great. It’s a sign of the times that we are surprised by a strong story in a tent pole film. Alas, The Force Awakens does not excite either visually or with content.

Now, on second thought, allow me to geek out about a few plot points. Many people have wondered how Rey, the film’s heroine, having virtually no fighting experience, is able to best the villain Kylo Ren in the film’s climactic light saber battle. Ren is highly trained in the ways of the force and sword play and one of the most feared beings in the galaxy, and Rey, a novice in almost every sense, somehow out duels him. There have been various theories about how this is possible, but I look at it like this: Michael Jordan was the greatest basketball player who ever lived, yet he couldn’t hit over .200 in minor league baseball. You can have great natural talent in one area but it won’t apply automatically in another.

That goes for piloting ships, which is a problem in just about every blockbuster film these days. Because a person can pilot one craft it is assumed he or she cannot only pilot any other craft instantly but also do it better than people who have trained and operated those vessels for years. I’m not sure when this meme started, but clearly it’s worked itself into the codes and conventions of movies so deeply that writers, directors, and producers no longer stop to think it might be illogical.

On the subject of logic, there is a scene in The Force Awakens when a First Order commander gives a speech prior to unveiling a new death star type of weapon (yes, yet a third death star has been built). The speech is intended to look like a Nazi-style Nuremberg rally with thousands of storm troopers huzzahing the commander’s ravings. But earlier in the film, we are told that storm troopers are kidnapped by the First Order as children and systematically programmed to become mindless killers. Why then, give them a buck up speech? What do they care? The Germans at the Nuremberg rallies most assuredly cared and had not been kidnapped from other countries to create an army. It struck me as a completely unnecessary scene with an internal contradiction the filmmakers did not realize.

Why am I harping on this scene? Because the one truly interesting thing about The Force Awakens is the character Finn. He’s a storm trooper who rejects the life he has been impressed into and flees the First Order. To this point in the Star Wars story, storm troopers have always been presented as faceless automatons who blast everything in sight. They have no character, no soul, nothing. But of the millions of storm troopers out there, why has Finn rejected this destiny? Are there others, perhaps in the rally, like Finn? Pretending to be for the cause but secretly doubting? Assuredly, Finn will be explored in later episodes, but in The Force Awakens any interest about his character that builds is generally derailed by silly dialogue and inexplicable plot turns.

And this brings us to the ‘force’ behind the future of the Star Wars series, J.J. Abrams. George Lucas famously sold all rights to the Star Wars franchise to Disney, who brought in Abrams to carry the torch. There was much trepidation among the Star Wars faithful that the story would be Disney-fied. In truth, Star Wars had been commoditized since its debut in 1977, but I would argue that Disney has not done much to it. It pretty much remains in the same place it was when the prequels were made in the late 1990s and early 2000s, and Abrams is the perfect standard bearer for these kinds of films because he is a showman extraordinaire. I say showman as opposed to filmmaker because I’ve never been impressed by Abrams’s writing. From Lost to Super 8 to Star Trek, Abrams is more Michael Bay than Steven Spielberg. He’s big and bold and can put butts in the seat, but he is not a convincing storyteller.

In fact, I fear there may be no such folks remaining in Hollywood, at least at the blockbuster level. Part of the hubbub surrounding The Force Awakens was the return of writer Lawrence Kasdan to the Star Wars mix. Kasdan wrote the script for episode V, The Empire Strikes Back (among other great scripts), which is universally recognized as the best chapter in Star Wars. Kasdan, it was said, would return the Star Wars series to respectability with his storytelling skills. Alas, it is not so, as the script bears the mark of Abrams far more than Kasdan, and the jedi-order that once brought peace and justice and good writing to the galaxy is all but extinct.

I’ll allow that for anyone this chapter would have been difficult to write. If Disney did indeed mandate bringing back characters from the original trilogy any writer or director would have a challenge almost too hard to take on. The Star Wars prequels of the late 1990s and early 2000s, in large part, told the story of the rise and fall of Anakin Skywalker. There were other characters naturally, but the focus was on a persona that had already been created in the first three films. Unfortunately, the opportunity to do something terrific with Anakin, who eventually becomes Darth Vader, was flubbed.

So we might feel more charitable toward Abrams and company who have been tasked with not only reviving storylines for characters such as Han Solo, Princess Leia, and Luke Skywalker, but also creating new threads for Rey, Finn, and Kylo Ren. But the result is cacophony not synergy, and I’m not even sure Yoda could write his way out of this Dagobah –esque swamp.

Therefore, in my opinion, episode VII can be dumped into the stew of I-III and forgotten. The Force Awakens might set many box office records, so in a business sense it is a success, and maybe that is all that matters. What surely does not matter –which may be impossible—is recapturing the magic of A New Hope, The Empire Strikes Back, and The Return of the Jedi.  With each successive addition to the Star Wars story –and there is likely to be one new film every two years or so—the series creeps closer to the dark side and ever farther away from the light unto which it was born.