From winning “Best Electronic Act” at the Boston Music Awards to playing their largest show at Boston Calling, Bearstronaut achieved local prominence all within the last year. However, 2014 will be another eventful year for this Boston-based quartet, as they’re heading southwest in March to play at the SXSW Music Festival. A major music and tech convention, SXSW will be an excitingly new dynamic for the boys. 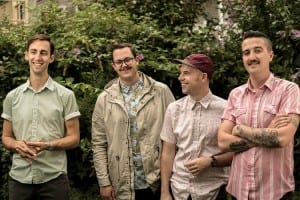 Media credit to The MuseBox

The band consists of four members: guitarist and lead vocalist Dave Martineu, bassist Nate Marsden, keyboardist Paul Lamontagne and drummer Philip Boisvert. The musical chemistry began when the four met in UMass Lowell, a close-knit scene in which other up and coming bands were also figuring out their sound. Martineu claims that this type of diverse environment allowed for collaborative musical experimentation, which has evidently contributed to Bearstronaut’s unique sound.

From there on, the band settled in Boston, a city that allowed the boys to develop and refine their staple vibe: danceable. This is showcased in their hit song Passenger Side, a tune reminiscent of the 80s with its disco-esque elements and upbeat melody. However, Bearstronaut’s eccentricism wasn’t intended, as Martineu explains their initial focus when first developing their sound: “We wanted to hone in on what we wanted to do instead of making everything abstract and different.” This wise decision led to multiple nominations and an award in the Boston Music Awards, solidifying the band’s local success. 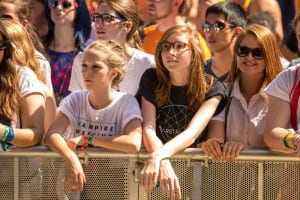 Fans at Boston Calling. Media credit to The MuseBox

But now it’s time for new audiences to jam to Bearstronaut’s addictive tunes, and SXSW is their chance. Since SXSW is such a large music convention, Martineu believes the festival will hopefully enable the band to network, play larger shows and turn their gigs into a tour. Aside from the amazing opportunities that the convention has to offer, the band just mainly wants to have fun. But that shouldn’t be too difficult, since Bearstronaut is known for their highly energetic and engaging performances. If they could make Boston dance, then Austin should be no problem.