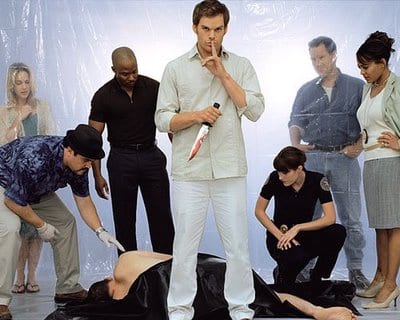 Spoiler Alert: If that didn’t give you enough of a pause, let me reiterate; if you are absolutely not caught up through the end of Season 4 of Dexter, do not read this. It will change the nature of the show for you. Be warned.

Season 5 of Dexter opens with a strange interlude of scenes as it’s clear that Dexter and the supporting cast are (SPOILER ALERT) in shock from Rita’s death. Dexter, Deb, LaGuerta, they are all shaken and deliver subtle yet effective moments showing their agony over his loss, the last murder performed by Arthur Mitchell, AKA the Trinity Killer before his own demise at Dexter’s hands. Just as Dexter thought he had vanquished his biggest foe yet, he arrives home to find Mitchell had taken his only human connection, his constant, Rita, from him.

One scene in a funeral home as Dexter prepares Rita’s arrangements is interesting and poignant, if only because Michael C. Hall (Dexter) previously earned his acting cred working on a show all about a funeral home (Six Feet Under). But the funeral home and Dexter’s inner monologue throughout the scene, including his flashback to his and Rita’s first date, reveal an important facet of Dexter’s inner psyche. Despite his constant belief that he was unable to forge a connection with others, his thoughts that he was separate and his feeling’s of guilt towards Rita, they show quite the opposite. Dexter is dealing with his grief and trying to mourn Rita in his own way.

The premiere sets up a nice group of plots for the season, while maintaining reverence of the monumental event that ended last season. Many viewers have spent the past 9 months in disbelief; how could they follow up that cliffhanger? Even after the first episode back, it’s a hard question to answer, and it’s clear, even in its obvious nature, that the series has crossed a threshold. The premiere picked up the threads well, but it’s still unclear if they can deliver on the necessary change in direction for the show. Many have been wondering; the anger that Rita’s death must clearly instill, how would Dexter take out the rage? The show continues to blaze trails; Dexter for the first time on screen commits an act that violates his code, even if it seems like the only outlet for Dexter’s grief.

Ultimately, a theme prevalent in Season 4 of “Dexter” was reinforced by the Season 5 premiere: Dexter may kill people, and he may feel alienated, detached and unlike other human beings, but he is utterly human and relatable. The episode is a strange mash of events, and it feels surreal. But that’s the feeling of Dexter’s loss; he is feeling the shock and pain of losing a loved one; he is going through typical emotions as he deals with his own loss and guilt over his perceived involvement. After all, that’s the core of “Dexter;” his actions may not be relatable, but his emotions are the core of humanity.