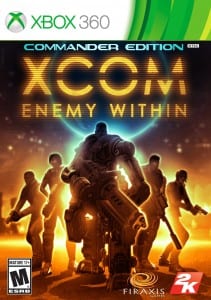 When I finished XCOM: Enemy Unknown, I couldn’t help but feel like I wanted more. Not “more” as in the game had been lacking in any particular aspect, but “more” as in I enjoyed the game so much I was hungry for more. More technology, more aliens, more weapons, more everything. Lucky for me, the recently released expansion XCOM: Enemy Within gives you just that: more. And not a little more, but a whole lot more.

Once again, take control of Earth’s last defense against an invading alien race as the commanding officer of XCOM–only this time with added upgrades, weapons, and a completely new threat to the human race: other humans. The addition of multiple new weapons such as different types of grenades, new alien unites, and the ability to upgrade your own soldiers with a new resource, MELD, truly make the most of the original material by expanding on every facet of the game.

One of the greatest parts of Enemy Unknown was seeing what was going to come next. It was rewarding to find out what new technology would come from the four days you made your science team commit to examining a Sectoid corpse, or what new weapons could be created after studying alien laser technology. In this respect, Enemy Within completely improves upon an already great experience. While the science team still remains unable to multitask and must commit to studying only one assigned research project, research is nevertheless rewarded with a new and often useful technology or MELD compatible upgrades. With so much more available, it really feels worth it to make that risky move to capture a live Brute for interrogation.

The addition of the new alien attainable resource, MELD, is not only fun in the base management sections of the game, but also adds a welcome side objective to the frequent alien encounters. With one MELD container placed fairly close to the starting zone and another a little further away, they are each set to self-destruct after a set number of turns, making them an asset that must be sought out with a certain amount of haste. Back at base, MELD is used to augment soldiers in one of two ways: by enhancing their DNA structure improving physical or mental abilities, or by augmenting a soldier with robotic limbs allowing them to control large, powerful machines called MECs.

The DNA enhancements can be given to any soldier and can give a welcome boost to any unite. Enhance a sniper’s legs to allow them to get to higher ground quicker, or a give a high ranked unite a second heart giving your support more time to revive them should they fall in battle. The new MEC class can be created by any existing class of soldier and they retain a special ability which carries over from their previous class. For example, a support turned MEC gains a field boosting the cover ability to allied unites. The large mechanical machines controlled by this class provide a powerful combat boost to any squad and though they don’t use cover, they make up for it by having a lot of health and very powerful attacks.

While the use of MELD is a great way to improve you soldiers, it is not readily abundant, nor is it always easy to obtain. This makes choosing whom to augment, or how many MECs to create an often difficult choice. This fits in perfectly with XCOM’s gameplay which requires players to plan ahead and develop long-term strategy rather than focusing on the short-term quick fixes.

One of the smaller mechanics which I found enjoyable was the addition of medals that are gained throughout as you play. The five differing medals can be given one of two different attributes and then given to any soldier. Another big addition is the introduction of EXALT, a secretive militaristic organization that aims to use the alien invasion to further their goal and use the foreign technology to advance the human race. They will secretly infiltrate your organization and syphon funds from your account into their own. In order to stop them, you will have to send a lone soldier, armed with only a pistol, to gather intel. Once they complete their mission or have been discovered by EXALT, you must send a squad to extract that soldier an return them to safety.

The major problem with the addition of EXALT is not in content, but rather in context. I didn’t mind the frequent skullduggery of the rebel faction and found the missions involving EXALT to be exciting and a nice change of pace. However, there never seemed to be any true context to their existence other than just to annoy and distract from the main task at hand. There is slight mention of why they exist, but other than the advancements to their own soldiers they don’t seem to have a true agenda. This was a missed opportunity to provide a second antagonist to go along with the aliens, and resulted in an amorphous group that was just inconvenient rather than a true threat. In addition, I felt bad during the final assault on the EXALT base, because apparently I had completely destroyed their organization out on the field leaving them with only a handful of unites to protect their main base. It was a disappointing and anticlimactic confrontation to say the least.

The conclusion to the EXALT missions also leads into the most prevalent flaw with the expansion: all the new power-ups and upgrades are highly weighted toward the player. And while it adds a lot of new content for the player to enjoy, the aliens are not given the equal opportunity for advancement. Aside from two new alien unites, the rest of the invaders’ arsenal remains the same and to compensate, they just seem to throw more unites at you. This causes the latter part of the game to become much easier as you form an elite team capable of wiping out any resistance and taking only minimal damage.

Overall, Enemy Within is a massive expansion and the new material truly improves upon an already great game. If you are interested in getting into XCOM, definitely go straight for Enemy Within and experience the game for the first time in its fullest. And if you enjoyed the last years rendition of XCOM when it was released, Enemy Within offers many reasons to give the game another go. However, if you have only recently played through Enemy Unknown, the value of Enemy Within will be significantly decreased as the game begins to slow down dramatically as your team becomes overpowered and the latter half becomes just a routine seek-and-destroy campaign.