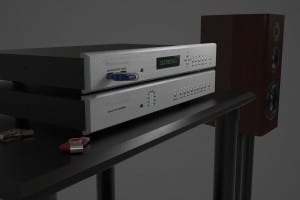 Many people have seen the vast differences between watching an old school 480p standard definition TV and the sparkling clarity, depth of field and color accuracy of 1080p high definition video. The same jump in detail is now available in the audio realm as well, with high resolution digital music.

For the first time in history, consumers can go online and purchase music so accurately captured, it is equivalent to buying a direct copy of the studio master recording. You can hear what the artist heard as he or she completed their latest offering.

This is a far cry from MP3, CD or even LP records—widely considered the most accurate representation of recorded music. The process of converting a studio master for mass production causes a degree of deterioration in fidelity that artists such as Neil Young and many others have bemoaned for a very long time. The dynamics, the organic nature of the instruments and voice, and the dimensionality all suffer when comparing what the average consumer hears to the studio master. But thanks to web stores such as HD Tracks and others, high resolution audio is now available for download. But can you play these files?

There are a number of ways to enjoy high resolution music. There are audio manufacturers like Bryston and others that make dedicated players for this new format that sit in your rack of hi-fi gear like any other audio component. Computers can be outfitted to play high resolution music files, however many tests indicate that while a computer is busy checking for viruses, software updates, new e-mails and all of the countless chores we use computers for in the modern era, the detail in the music becomes compromised.

The Bryston BDP-1 and BDP-2 digital music players will access files from any USB drive, utilize no moving parts, feature a robust Linux operating system and are optimized to do one thing—music playback. The highest resolution files have finally brought the digital music domain quite close in performance to the beloved analog playback warmth and tonality that audio aficionados speak so fondly of when referring to exotic LP record playback systems. But digital players offer the convenience of remote operation from a variety of devices such as Apple iOS and Android—true high fidelity and convenience too!