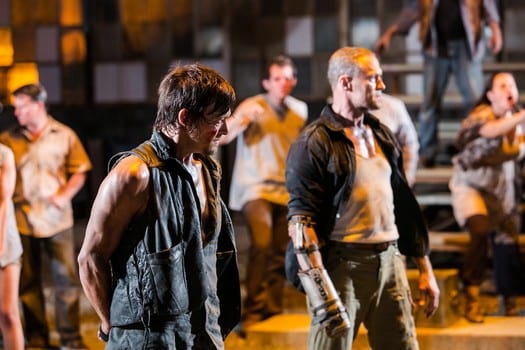 On the one hand, I am struggling to contain my all-caps joy that THE WALKING DEAD IS BACK. On the other hand, however, it’s not back in nearly as thrilling a way as the midseason finale that led us here. Returning from midseason break can be tricky, and in this case “The Suicide King” serves more as a set-up for the conflicts to come rather than the plot-twisty adrenaline rush that we had gotten used to in the last few episodes.

It picks up right where “Made to Suffer” left off, with Merle and Daryl pitted against each other in the Governor’s sick arena. Andrea’s reeling from the unexpected appearance of Daryl and the knowledge that her friends (you know, the ones who abandoned her on Hershel’s overrun farm) are still out there, and she tries to stop the fight. Unsuccessful as usual, the Governor forces the Dixons to fight to the death, a spectacle complete when some handlers bring in a few walkers to spice it up. Thanks to Rick and the others’ diversion – another smoke bomb and heavy gunfire – both Merle and Daryl make it out of Woodbury alive while David Morrissey broods the best he can with one eye into the opening credits.

Rick and the others left an ominous gap in the fence when they escape, but Rick is too busy worrying about not taking Merle and Michonne back with them to realize that it’s kind of a huge clue to where they headed as they left. Oh well. The conflict between Woodbury and the prison is clearly what this half of the season is heading towards anyway. Merle is his usual offensive self as he spills Andrea news to the group, and Rick is surprised to learn that Michonne had traveled with her. Honestly, with the constant jumps between locations, I had forgotten that Rick’s group didn’t actually know anything about Michonne or Andrea. In any case, Rick shuts him up by beaning him with the butt of his gun, so that’s settled. Props as always to Michael Rooker for being so talented at being the perfect amount of repulsive as Merle.

Rick and the others deliberate about Merle while he’s unconscious. Daryl won’t go back without him, but the others don’t want him around. The idea of family and loyalty gets tossed around in this conversation as Daryl has to choose between his blood or his new family, and I think I smell a potential thematic arc here. My heart breaks a little for Daryl when Glenn asks what they’re supposed to tell Carol; for all the stone-facing he does, Norman Reedus sure can work those subtle facial expressions when he has to. Daryl leaves with Merle anyway, and just like that, Rick’s group is down one of their strongest members.

Back in the prison, Hershel and Beth chat with Tyreese’s group. They came from a group of 25 who had lived in a survivalist neighbor’s bunker, but they had been overrun six weeks ago. Hershel is pleasant as always, but warns them that once the rest of their group gets back they’ll probably have to hit the road. In the meantime, they get to properly bury Donna, though not without a mutiny attempt from Alan. He thinks they can take over easy, what with the group being a bunch of girls, Carl, and one-legged Hershel. Tyreese shuts that train of thought down quickly; there’s no arguing “survival of the fittest” when the fittest person around says to sit tight and be nice to everybody else.

Glenn has a bit of a fit out on the road after he takes out his pent-up rage by curb-stomping a walker a little too repeatedly. He wants revenge on the Governor and Rick won’t let him try for it. Granted, Glenn was tortured pretty badly himself, but there’s a definite avenging-my-girlfriend’s-honor thing going on here too, which isn’t strictly necessary. It’s understandable from a character perspective, but I’m hoping as a show that we can move past the knight in shining armor routine.

Woodbury is having problems of its own. Nine people were injured in the Daryl rescue, and now people are clamoring at the gates with their cars packed up trying to get out. An all-out fight between the guards and the regular folk is prevented by the appearance of walkers from Rick’s hole in the fence. Andrea and Martinez make quick work of the handful of walkers, though they got their teeth in one poor guy. The Governor silently emerges from his house only to shoot him in the head before he turns and then retreats again.

Andrea barges into his house to confront him, urging him to think about all the people panicking out there. He’s dropped the nice-guy act, suddenly vicious about the softness of the town’s population that, you know, he created. Thankfully, Andrea’s (mostly) done taking his crap. She tries to stop him from going after her friends, but then she turns around and asks him not to drive her away. So I guess she’s still on his side despite everything she saw in his weird secret room. I know there’s a lot of fandom hate for Andrea, but I’m going to withhold judgment until we see how this Woodbury vs Prison Group conflict plays out.

Back at the prison, Carol tries to comfort Carl about Lori as they stand guard. Their relief is palpable when the too-clean-because-it’s-product-placement pulls into the prison. Carol worriedly peers into the car, and Rick breaks the news about Daryl leaving, and my heart breaks a little bit for the second time about the same friendship. I just really hope Daryl comes back at some point; the group is going to be strange without him. Oh yeah, and Rick adds that Oscar’s dead when Carl asks. Too bad we never got enough time with Oscar to care about him that much.

The two halves of the group reunite, and there’s a really weird moment where Beth kisses Rick on the cheek for bringing her sister back. I can’t begin to imagine where the writers are going with this, but I’m getting an odd vibe not only from this moment, but from the moments throughout where Beth is shown as Judith’s mother figure: Sasha assumes the baby is hers, and Carol compliments her on her caretaking skills. Maybe Beth is crushing on the less age-appropriate Grimes? In any case, when Beth hands Judith to Rick, his trademark weird background music kicks in and he gets the crazy eyes again. We’re not shown what he’s seeing, not like when “Shane” strode through the mists of Woodbury, but it’s definitely a bad sign.

The moment between Carol and Beth is actually a great conversation. Sure, the talk about baby care is not the most riveting, but I think it was important for Carol to talk about not only her daughter but her abusive former husband. She explains the Daryl/Merle dynamic to Beth in the best way she can, and places it in the context of her experience with Ed. I never expected her to bring Ed up again, but she does, and her character growth is just so obvious from season one to now that I absolutely think she’d be strong enough to turn Ed away now and I just really like Carol you guys, I don’t know if you can tell.

Anyway, Hershel plays counselor as well as doctor as he goes around checking on Glenn and Maggie. He tells Glenn he considers him a son, and he begs Maggie not to disappear on him, so it was generally a Hershel emotion-heavy segment. I don’t mind, I like Hershel, and I like the way Scott Wilson plays him. He’s like the wise old post-apocalyptic grandfather I hope I never need to have. He also tells Rick that Michonne won’t be able to travel for a few days and advises him to consider hanging onto reinforcements. You know, like the four able-bodied people in the other room and the woman who can kick everyone’s ass with one hand tied behind her back. It’s going to be incredibly frustrating if Rick’s hard-headedness gets everyone killed by the Governor.

Rick introduces himself to Tyreese and the others by refusing their requests to stay. He’s still reeling from the Tomas and Andrew fiasco, which is admittedly a hard betrayal to get over, but Hershel pulls him aside to tell him what we’re all thinking: don’t be stupid, Rick. The lighting in this conversation is interesting to note. Hershel, voice of reason, is directly in the light; that plus his white hair and shirt scream “I am the good guy” while Rick (when not facing the camera) is cast into shadow. It’s not the most subtle trick in the book, but it’s pretty effective at reinforcing the question of whether Rick is the best man to be leading this group.

A question that’s pretty much answered a moment after Hershel speaks his piece when Rick’s ominous discordant music starts up again. He sees a woman who isn’t there up on the second floor. She’s wearing a white dress and it’s hard to see her face, but it’s probably Lori. It’s either that or his Shane hallucinations have gone in a very interesting new direction. Rick freaks out, and it escalates to him with a gun in his hand shouting at empty space to get out. Glenn ushers Tyreese and the others away while the rest of the group just stares at Rick in horror.

Sure, it’s not the most exciting cliffhanger we’ve ever gotten, but I can’t say I’m disappointed in the episode overall. It was not better or worse than the rest of the season to date, and it’s definitely set up some interesting possibilities for the next several episodes. There are Rick’s hallucinations to deal with, the now-absent Dixons, war with Woodbury looming, and that weird potential Beth subplot going on. All things considered, “The Suicide King” did its job of getting us re-hooked on the show and looking forward to the rest of the season.