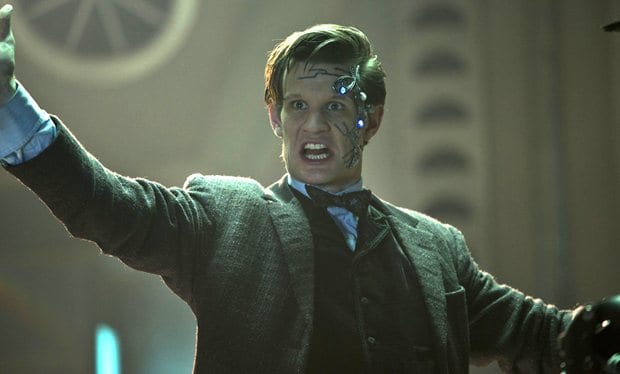 The Doctor (Matt Smith) must duel with a Cyberman chip inserted in his brain.

The Cyberman goes deep into Doctor Who historical lore and has been one of the most predominant adversaries of the Doctors for the decades the show has been on air, similarly along with the Daleks. During Moffat’s run we’ve seen them appear a few times but never with an arsenal of them and never quite in the way they were utilized this week. However, the question remains about how do they make such a caricature-like creature be threatening after so many appearances throughout time? When the Doctor sees the first one it’s instant fear and caution and we need to know why? Why is the Doctor of all people so wary when it comes to them? Are they convincingly menacing so that the audience would understand?

Sadly, not so much. There have been a number of truly frightening threats on the show and it seems there’s a tendency for the most renowned of the villains to come off the most cartoony.

Even if these ones have been given an upgrade, it comes off short such as season premiere The Asylum of Daleks which promised BIG things with the promises being greater than the outcome.

First and foremost, there was Neil Gaiman who wrote my favorite episode of season six “The Doctor’s Wife.” Because of his involvement, I was expecting great things, wonderful character arcs, patchwork people, dire situations and a new twist on an old bit of knowledge we all believed as true as virtue.

I got about fifty percent of my wishes which in retrospect really isn’t too harsh of a deal.

The Doctor has brought along not just Clara this time but also the two children she nannies for, Artie and Angie which may have been the beginning of my problems. Children on this show have been typically well cast (think young Amelia Pond or the girl from “The Rings of Akhenaten”) but they’ve also served a purpose. The utilization of Artie and Angie would have been better served if used in an earthbound plot. We don’t know them well enough to care if Angie resents Clara or to care when they’re ultimately taken by the Cyberman and inserted with a Cyberman ear piece.

There are also far too many characters for such a jam packed episode, Warwick Davis guest stars as the reluctant emperor of a planet, there’s an amusement park employed by renegade soldiers, and a revitalized characterization of Clara.

I’ll get to that in a moment.

Crucially though, the real momentum of the episode begins when the Cyberman comes to life after a period of hibernation but this time with some new duds: this time they have cyber insects that could work their way into humans—and not so human—brains and control them from the inside out, allowing them visage of their intellect but “upgraded” to a Cyberman level.

The Cyberman grabs Artie and Angie and the Doctor goes after them and tells Clara that he doesn’t trust the army members there not to blow up the planet so he tells her that she’s in charge.

An order that she picks up with surprisingly quick gusto and precision.

Is this the same Clara that we’ve known thus far? This characterization of bold leadership and unflinching confidence in the face of unwelcome terror seems fitting for River Song, Amy Pond, maybe even Rose from the David Tennant years—of which I’ve sadly seen a few—but Clara? Hell, it might have even worked with the first or second version of Clara that we met.  It just doesn’t compute with the rest of this version of the character that we’ve seen, a version that’s been refreshing to the numerous characters who seemingly rush into danger without a second glance, while she takes a second, worries about imminent injury or death, and has actually shown fear.

It would have been better even if it had taken a second for Clara to gather herself and work her way into the confidence she had. A headstrong character is fine but having her unrealistically be in command of an army is a reach and erases much of the progress this character has already gone through. Jenna Louise-Coleman is doing everything she can to make Clara interesting in her own right, and for the most part succeeding, but she needs some assistance from the writers, too.

It’s a letdown that is almost entirely eclipsed by Matt Smith’s thrilling performance.

The Doctor has found the children but has also run into a Cyberman. Up until this point he hasn’t had to directly fear harm because of him not being human—the bodies the Cyberman typically use—but now because of their upgrade they’re allowed to attack him as well.

A bug is sent into his head and we’re met with one of the coolest scenes the show’s done which is giving us a looking into a Time Lord’s brain. It’s a battle of will and of wit for the Cyberman parasite and the Doctor for the control of his brain and the way in which they visualize this image is inventive and a site to behold, so much so that I would have much preferred to see an hour dedicated to this rather than a narrative spread across multiple arcs.

We’ve been privy to Smith’s ability to switch in a blink from one version of the Doctor to the next; manipulating his facial structure to display subtleties of a man a thousand years old. However, rather than just alluding to a darker personality, Smith is allowed the chance to be a darker personality and he does so with palpable enthusiasm.

Smith is more frightening in this episode than the actual threat itself.

The key to the Doctor’s success will be a game of chess, whoever wins is granted control of the body.

Chess has always been a strategic way in visualizing characters under duress, both figuratively and literally. Here are the pawns and here is the hand the guides them, but who will beat the other out in the end, who will have the most control in the progression of the game.

The Doctor manages to get control of his mind long enough to run to another room and confront Clara where he tells her to  restrain him so that he can’t leave but to allow freedom of his hands for the rest of the game.

It’s his interactions with Clara that are the most chilling. His personalities are rapid fire, one more exuberant and energetic the next cold and daring, unnerving Clara especially when the Cyberman bot tries to convince her that he’s really the Doctor.

Essentially, Smith was better than the writing of the episode which is a shame.

After this, the plot gets wrapped up quite neatly, too neatly when dealing with Cyberman. Angie gets rid of her Cyberman earpiece and helps save her brother, Clara and the crew is backed up against a wall as imminent Cyber doom descends upon them, and the Doctor with the help of the Emperors’ hand tool manages to electrify the cyber device off of his face to regain control of his mind.

After the episode of watching the two fight I was hoping for more of a struggle in the end.

The crew are safe for now but that doesn’t change the fact that Cyberman have successfully infiltrated their home base and multiplying by the minute which comes to a difficult decision: should they destroy the planet with a bomb, or allow the Cyberman to run rampant.

The decision falls on the emperor who decides that for the betterment of the universe he will implode the planet, ridding them of the threat.

I feel like in recent years we’ve seen far too many planets meet their end.

Quick and tidy, the episode ends with some jest and sweet words as the Doctor sends Clara and the kids back home.

I’m uncertain of my exact feelings for the episode but the main one that keeps returning is the disappointment in the narrative as a whole. Neil Gaiman is renowned for his science fiction and in particular, his stories that are the right balance of dry humor and dark dwellings, so it’s a shame to hardly see his usual style (other than the patchwork folk) in this episode. Although there were moments of interest and many themes that popped up, none were explored in a satisfactory manner. The kids join and are turned mute for the majority of the episode, Clara is put in charge and shows little character growth due to it, we’re literally inside the Doctor’s brain and it’s mentioned he’s been erasing himself from history but that’s as far as it goes.

Of course there are some singularly stand out moments, such as Smith taking on the previous two Doctors catch phrases, “fantastic” and “allons-y” with some true dedication to the characters. There’s the images of the abandoned amusement park which are lovely and haunting and promise a darker story than the one delivered.

It was once again a filler episode which doesn’t get as much of a pass considering it’s the penultimate episode before next week’s finale. I should have been wowed by the episode as a whole, not just Smith’s episode.

While I’m none too excited about the Doctor’s name plot that seems to be eating up this season’s finale, I’m more that excited to see River again and see what happens to lead the gang to the Doctor’s revelation.

Only one episode to go for season seven!