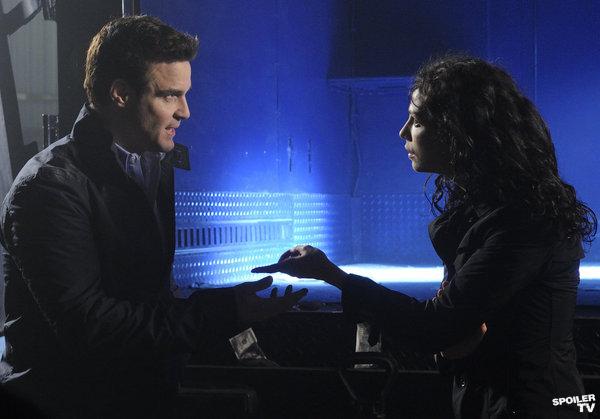 Tonight’s episode begins with Steve fetching his belongings from his room in the “dead agents’ vault” that the Warehouse automatically stores. Though at first I was concerned he was leaving for real, maybe to stick close to the Regents, it turned out he was just moving his stuff back into the B & B. Steve is a full-fledged member of the team again, which I would be more excited about if H.G. was too. Where has she been since the season premiere?

In any case, Pete attempts to debrief the gang on the hot shower situation at the B & B, but is quickly interrupted by Artie’s legitimate meeting to discuss a ping in North Dakota. There’s been artifact activity near Devil’s Lake: a cleaning woman came down with poisoning from a rare South American spider, only without the spider bite. Steve remembers a wooden token that Sykes had that did exactly that, and they realize they’ve stumbled upon his backup storage facility.

Pete and Myka go to the house to check it out, and sure enough, Sykes was using it as a front. The pictures in the house are all the ones that came with the frames, the cleaning lady only came once a month, and there are even plastic cinnamon buns in the kitchen (Pete: “Ugh, plastic! He really was evil.”). Myka snags and bags the wooden token, which was left on the dining room table, and Pete discovers a bunch of A to Z Technologies crates in the basement that have been broken into. No artifacts here, although we see tonight’s guest star Brian J. Smith pawning off a bunch of seemingly random junk in the next scene. He needs the cash, but upon discovering that the pipe in the box can control the weather, he decides to keep that one.

Pete and Myka realize that this house has an alarm system but it never went off during the break-in. They head to Safeco Security and question the guard on duty. Turns out, he’s friends with Jesse (Brian J. Smith), and he had given him the access codes when Jesse approached him in desperate need of cash. They head to the local pawn shop, but Pete has a bad vibe and prevents Myka from going in. Sure enough, the shop explodes not three seconds later.

The situation warrants an investigation by the entire team, so Steve, Claudia, Artie and Leena all come out to Devil’s Lake to help track down the six artifacts that were purchased before the explosion. They split the list three ways, with Pete and Myka tracking Jesse and Admiral Byrd’s pipe. They find only a few things in his apartment, including a possible next destination at Country Sky Savings and Loan on his laptop, but mostly they’re in awe of the giant hole blown through his roof.

Steve and Claudia, meanwhile, check out a local lingerie shop, where they’re hoping to find the man who bought the first pair of Ray Ban sunglasses from the pawn shop. It turns out the sunglasses reflect light so powerfully that they actually render the wearer invisible to the naked eye. Jordan has been using this newfound ability to spy on ladies as they try on merchandise in the changing rooms. He seems like a really classy guy, this Jordan character.

Over at the Marley School of Music, Artie and Leena have located the missing violin. It’s being played by a little girl who is sending more out from her instrument than just the pained notes of a beginner’s exercise book. There are violent blue bursts of energy ricocheting off the walls, and they’re coming from her violin. Artie manages to get it from her with a flimsy excuse about being from the department of contagion.This particular violin had been played by Napoleon when he was in exile, and had she hit a G sharp, things would have apparently gotten a whole lot worse. Now, I can’t imagine how this little girl and her teacher didn’t notice the whole blue balls of energy flying around thing, but that’s one of the minor plot speedbumps that Warehouse 13 sometimes hits.

In any case, Pete and Myka make their way to Country Savings and Loan, which has been completely destroyed by a “rogue tornado.” Thankfully no one was killed, but Jesse is clearly learning how to control Byrd’s pipe. Pete and Myka interview Jesse’s mom, who says he’s had a terrible temper since childhood but asks them not to hurt him. Myka notices several past due notices on the table from – you guessed it – Country Savings and Loan.

Steve and Claudia, meanwhile, have figured out that cameras can see Jordan when the naked eye can’t. Steve clotheslines him pretty good as Jordan runs out of the changing rooms and the sunglasses are knocked off his face, revealing milky white eyes – he’ll be blind for twice as long as he was wearing the sunglasses.

Artie and Leena head to the local country club to search for the bag of golf clubs Sykes had stored. “A Jew and a black woman go to a fancy country club…all we need is a priest and a horse and we can do the whole joke,” Artie quips. They find the man who bought the clubs, Hank Conway, lying unconscious in a chair next to the abandoned bag of Bobby Jones’ clubs with a nine-iron imprint in his forehead.

Pete and Myka have been tracking Jesse using the weather reports, since a low front will come in whenever he starts brewing a storm. Pete uses the voice activated GPS so that the car company whose commercials pepper the show will have some footage to use, and they track Jesse to a warehouse where an armored car is being stored. They confront him, and Myka notices a bandage wrapped around his inner elbow before he drops the armored car on them from fifty feet up.

They obviously survive, having dove out of the way in time, and start to speculate about what Jesse’s motive is. His bandage coupled with the anatomy book they found in his apartment and his desperation for cash leads Myka to theorize that Jesse is sick, and trying to get treatment before it’s too late.

Back at the country club, Conway wakes up and tells Artie and Leena that his wife was the one who knocked him out with a golf club. He had bought her the clubs cheap at the pawn shop because he not-so-secretly wanted her to hate golf so he could continue spending time away from her with his buddies. Combine that with the anger-magnifying powers of Jones’ golf clubs, and you end up with an angry country club wife on a rampage.

Artie and Leena manage to stop her before she does any serious damage to her husband’s friends (well, physical damage, at least—she does lay into them pretty harshly verbally), and Artie takes the club from her. His contact with the club causes him to spew some verbal venom of his own about his frustrations with the sacrifices he’s made that no one appreciates it. It’s actually an intense moment, and I give credit to Saul Rubinek for keeping this moment from getting ridiculous. Artie’s outburst could have easily been too over-the-top to mean something, but it felt so genuine here that I was just as concerned as Leena was.

Steve and Claudia have had more success in tracking down the missing birdcage, though they narrowly escape being attacked by an entire bird sanctuary in the process. Claudia complains of being scratched on the neck, but Steve can’t find a wound. He, however, has a bird-inflicted cut on his neck in the same spot.

Pete and Myka have tracked Jesse to the local hospital, where they learn his younger brother is dying of a heart infection. Jesse, who shares his brother Ronnie’s rare blood type, has been making anonymous blood donations to keep him alive. Ronnie’s going to die without a heart transplant, though, and when the hospital director turns Jesse down despite his newfound riches, he raises a storm on the roof that will level the hospital if Ronnie isn’t in surgery in an hour.

It’s nearly impossible to find a suitable heart in the timeframe that Jesse has mandated, so Claudia suggests an off-the-manual solution. Myka tries to talk Jesse down while Pete slips on the sunglasses and attempts to steal the pipe away. His efforts are thwarted by a rogue tarp that conforms to his invisible shape in the wind. He fights Jesse, blinded without the glasses, and manages to knock the pipe from his hands.

Myka takes this opportunity to explain to Jesse why it’s not an easy fix for Ronnie: he needs an exact match for a donor heart to do the surgery. Jesse, tears streaming down his face, asks that they apologize to Ronnie for him, for not being there as a brother all this time. He grabs the pipe and strikes himself with lightning, dying instantly, sacrificing his life for his brother’s—he’s a perfect donor match. As soon as they said that Jesse and Ronnie had the same rare blood type I knew this was coming, but the drama of the moment still played out nicely.

Inside the hospital, a still-blurry-visioned Pete inadvertently hits on an elderly nurse while Myka dwells on the sacrifice that Jesse made. Sacrifice seems to be a big theme so far this season, and I can only wonder how far the Warehouse agents might be pushed to go to sacrifice for each other. We get a glimpse of this as Steve tests his private theory: he sticks his finger with a pin, and Claudia instantly feels that same prick in her finger but without the visible mark. I wonder if/when Claudia will figure out the connection, and whether Jane knew about this when she let Claudia resurrect Steve.

The episode ends with Artie being shifty in his office. Leena wants to talk to him about what he said under the influence of the golf club, but he shrugs her off. He makes a phone call to a mysterious source asking them to secretly help locate the dagger he’s been seeing in his visions about Claudia. It’s all very ominous, and I can’t help but wonder when all of Artie’s secrets are going to blow up in his face.

All told, this was a solid episode. The smaller moments and reveals (like Artie’s outburst and the Steve/Claudia connection) were more interesting to me than the main plot of the “artifact scavenger hunt,” as Claudia called it. I like the darker direction this season is taking. My only real complaint is about the lack of H.G. so far. She’s one of the most interesting characters for me, and I’d love to see her interacting with the other agents as part of the larger team again.