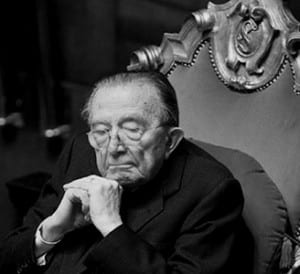 ROME — “Power wears out those who do not have it”. This is one of Giulio Andreotti more famous aphorisms that is a part of Italian history.

He was a major Statesman in Italy and he began his government career in 1947, when he became undersecretary to the President of the Council of Ministers in the fourth De Gasperi cabinet, a position he held until January 1954.

Mr. Andreotti was also called ‘Divo Giulio’ (from Latin Divus Iulius, an epithet of imperator Julius Caesar). There is also an Italian movie called Il Divo directed by Paolo Sorrentino and with Toni Servillo. The movie is biographical based on the figure of former Italian Prime Minister Giulio Andreotti. It competed at the Cannes Film Festival in 2008, where it was awarded the Jury Prize. The film also screened at the Toronto International Film Festival and was nominated for the Academy Award for Best Makeup and Hairstyling at the 82nd Academy Awards in 2010.

Giulio Andreotti was seven times Prime minister and he has gone through two world wars, seven Popes, Monarchy and Fascism.

He was a very Machiavellian and ironic person. He use to say that “if you think evil, it is a sin but you may often be right”. In 1974–1976, Giulio Andreotti was Minister of Foreign Affairs. During his tenure, Italy opened and developed diplomatic and economic relationships with Arab countries. In 1983, Andreotti became another time Minister of Foreign Affairs in the first cabinet of Bettino Craxi. He held this position until 1989, among other things encouraging diplomacy between the USA and the Soviet Union and improving Italian links with Arab countries. Giulio Andreotti was one of the most dominant figure of postwar Italian politics and the Italians called him the “the eternal Giulio” because of his political longevity.