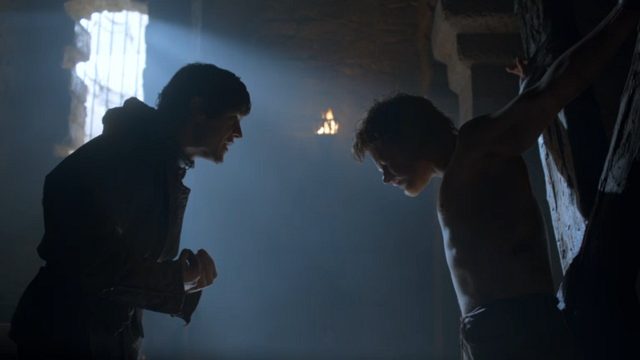 The dilemma at hand is this: I think I loved the episode, but I think part of me hated it as well. Here’s why.

So, when a filler episode is ultimately necessary, it’s frustrating because much of it will seem fruitless, especially for those who haven’t read the books and who didn’t already know the characters before the show began.

In retrospect this was an episode filled with some spectacular moments, many beautiful sights and some ace acting especially amongst the youngster crowd (Sophie Turner and Maisie Williams continuing to prove to be the lethal secret weapons of the show).

However, it’s decidedly important to decipher what was crucial in a storytelling sense and what was obligatory exposition that added very little to the depth of the episode.

Jon’s entire storyline exemplified the notion of crucial in a critical form. We needed to see these members of the wildlings climb the wall. We needed to see a cinematic narrative that was wrought with tension, thrilling and a step in the storyline that aids the other plot points. I’ve spoken a lot about movement and how many of the storylines thus far have been set points, points which the characters will gravitate away from going forward. This was a big piece and it was expertly shot despite the limitations of a television budget.

Ygritte has read Jon and she tells him that she knows he’s loyal, she knows that when he stepped into Mance Raydar’s tent he was still a crow, still sworn to the black. But now she tells him, his loyalty belongs to her. No matter where he is there will always be someone trying to rule him but to keep themselves safe it must be the two of them against the rest.

Arya’s scenes are brief but important still as she learns that even men who claim to have no King, who claim a faceless banner and will only fight for the everyday man, all of them can still fall to greed, the need and will ultimately betray her—ruthless lessons for a young girl who’s beginning to harden with each and every misdeed performed against her. Melisandre had turned up at camp to discuss with Dondarrion about their Red God and to take Gendry away with her for the betterment of her religion. He’s angry, telling them that he thought they were a Brotherhood of free men. Apparently even free men can be influenced.

Before she leaves, Arya grabs Melisandre and calls her a witch, furthering my love for this little fiery girl.

Melisandre turns around and tells her she sees darkness in her and behind that brown eyes, blue eyes and green staring back at her. She tells her that they will meet again and is off, leaving Arya the most alone she’s been since King’s Landing, her last confidant taken from her.

Tyrion and Cersei are discussing the nature of politics and their place in the eyes of their father, still reeling from their new marriage prospects. Cersei is desperately furious at being forced to marry yet another man who not only won’t love her, but also can’t. Tyrion believes that Sansa has the worst of it as they watch from afar as she tries, and fails, at flirting with Loras.

Which leads to Tyrion having to go and break the news to the poor girl while Shae is still in the room. I know there are many who believed that cutting away was a cheap shot but I think it worked within the context of the show. We already know the plans, we know how she would react, simply seeing her reaction later as Littlefinger sails off, all open pain and bitter wounds is all the more emotionally satisfying considering the façade she’s forced to wear.

Then there are scenes that deserved more time. I could watch an entire episode of Dianna Rigg and Charles Dance as Lady Olenna and Tywin trading barbs about whose children are the most screwed up. They come to a draw however when they realize that any notion that Joffery isn’t the true heir to the throne could jeopardize both families climb to power.

Jaime and Brienne are shown in far too brief a scene at dinner with Lord Bolton. He’s managed to dress Brienne up as a lady, much to her obvious contempt and in a darkly funny scene Jaime is struggling with all his might to cut up food with only one hand. It’s the reason why these two work so wonderfully together and why it’s all the more annoying that there was such an air of brevity in their one moment together. Lord Bolton tells Jaime he’s going to let him free as long as Tywin is told that his maiming was none of Bolton’s doing.

Brienne on the other hand is being sent back to Catelyn and Jaime is more than a little perturbed, but for now the matter is laid aside as irreversible.

It’s the fact that we got a good five minute torturing Theon scene instead of more character insights from those mentioned above that it’s frustrating and made it seem like filler. I have half a mind to post a [Fill In Blank Here] for any scenes containing Theon since my recaps of them will ultimately be vague considering I have my eyes covered most the time.

Listen, I can take gross, I can take super hyper violence, but up close torture scenes where I’m watching the agonizing pain of a finger being cut off as the victim is being played with? Yeah, even my stomach will weaken because of that.

But more importantly, it seemed ridiculous to take up so much time with it when there were so many other options. I think Theon is a fascinating character and Alfie Allen plays him wonderfully, I think Iwan Rheon is scary good at just how unhinged he can play, that doesn’t mean those things alone can sustain my interest through such a vile scene.

Time may have been better served if more time had been given to Bran who has suffered the most because of the character addition. All we get from him is Meera and Osha arguing over how to skin a rabbit (another thing that sickens me—watching people skin animals, yuck) because of course they just can’t along. We also get Jojen convulsing from a dream. When he wakes, he tells Bran he’s seen Jon Snow.

We also got a scene with Robb which is utterly forgettable. Essentially since he royally messed with Lord Frey last time his uncle Edmure must deal with the consequences and marry the girl he was supposed to.

Yet despite the misfires this episode seemed so seamless in the way it was shot, managing to tie together the characters in a more effortless sense than they have before. Whether it was Jojen talking of Jon Snow and then a quick transition to where Jon was, Jaime, Tyrion and Cersei being tied together, or Lord Bolton and Tywin, there were ties. Even, in a dark narrative move, there’s a connection between Arya and Joffery. Arya when practicing her aim shoots arrows into a fake target in her three main areas “the balls, the tits and the head”. Later when we see in a shocking move that Ros has been killed due to spying on Littlefinger and given to Joffery, we see she’s also been used as a form of target practice and look at the similarities of where she was shot.

Two completely different women, both of whom came from Winterfell, who played the game entirely different. Ros tried to somehow make her life better by playing the spy while Arya is playing it by simply staying alive and doing what she needs to survive.

The ending monologue by Littlefinger more than conveniently sums the episode up.

“Chaos isn’t a pit, chaos is a ladder. Many who try and climb it fail, they never get to try again, the fall breaks them. But some given a chance to climb, cling to the realm, for the gods, for love…Only the ladder is real, the climb is all there is.”

We see a montage of clips from Sansa’s heartbreak over the news of her marriage of Tyrion as she watches a ship sail away from King’s Landing, realizing that her fate is now intertwined directly with a Lannister, and the lesser Lannister at that, who will more than likely keep her tied to the place she detests the most. We see Ros strung up and full of arrows by Joffery’s sadistic hand, we see Jon and Ygrette having made it to the top of the wall, full of euphoria and bliss.

It’s almost jarring juxtaposing each character but it’s one the works seamlessly as well. We’re taken from one side of the world to the other and the emotions could hardly be any different. Sansa’s pain and longing to Ros’s utterly heinous demise which shows how even the smallest of players can fall prey to the men in the Kingdoms who wish to hold as much power as they can even if it’s too much for their arms to bear. Then sidle that up next to the North where after being cut down by a fellow member of the wildlings Jon and Ygrette lay amid the snow and look up and the endless skies ahead. And they stand looking out into the landscape, kissing. It’s beautifully done. It shies away from the kitschy but rather zeros in on the feeling of enthusiasm and adrenaline that would fuel each moment that these two share. Ygritte has never been south of the wall, has never begun to even imagine what the world as a whole may hold, and now she has a front seat view to the sunrise over the North. Jon may have broken his vows when he entered camp, and when he slept with Ygritte, but the moment that he chooses to kiss her is exhilarating because it perfectly establishes that this is HIS choice now. He chose to kiss her, he chose to share this moment of joy with her, and he’s decidedly forsaken his vows.

In hindsight, this was a good episode but it wasn’t the most proactive. It set up a lot, but it progressed some shorelines. It seems more than anything like the calm before the storm.