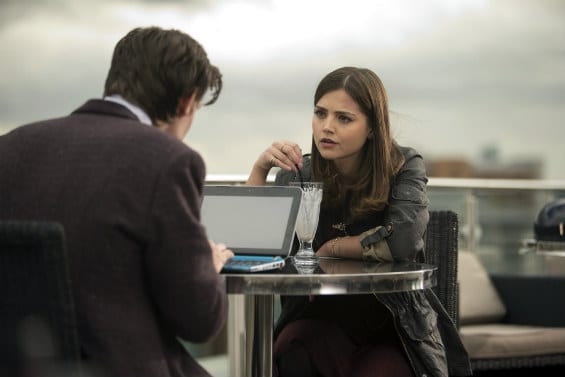 The Doctor (Matt Smith) and Clara (Jenna Louise-Coleman) try to figure the spoonheads and each other out.

It’s gotten to the point in the series where my own personal distrust of Steven Moffat’s capabilities at putting together well-constructed plots without various holes and unanswered questions have left me with conflicting thoughts: do I anticipate its return and each episode that follows, or do I take a step back, admit defeat, and simply enjoy it for its entertainment factor.

The verdict? It’s a promising start to the second half, but how much of that is dependent on the reinvigorated performance by Matt Smith and the hugely charismatic Jenna Louise-Coleman and how much credit actual goes to Moffat.

As of now, it would be safer to claim the former.

Steven Moffat is a man with big ideas who likes to tout those ideas and the intellectual prowess that goes into them, often times allowing his ego to overpower character development. It’s been the detriment to the show before—outstandingly in season six—and it’s understandable to worry about what convoluted idea he’s going to concoct next. Luckily though, this episode managed to balance the ridiculous, the big ideas and the charm equally well and it paid off with an enjoyable and fresh episode.

It’s all about Wi-Fi and Clara Oswin Oswald. Everyone today is somehow, someway connected by Wi-Fi and the internet—whether or not you want to believe we’re that dominated by technology. So, it was a clever idea to have a storyline centered on the threat of Wi-Fi stealing its user’s soul and placing it into their hard drives.

The episode begins with Clara making a call hoping to reach an IT department and instead crosses time and space to reach The Doctor, whose been posing as a monk. He realizes while aiding her in her computer woes who it is—but not before pressing the Wi-Fi link that will steal her soul—and rushes there, still in Monk robes.

He excitedly asks her if she knows who he is and she tells him no, she doesn’t recognize him, and is understandably freaked out by the strange man on her doorstep. She tells him to leave and closes the door on him, only to find a little girl on her stairs. She assumes it’s a friend of one of the children she nannies for until she realizes the girl is only repeating everything she’s saying. It’s then she realizes that it’s a replica of the image of a character of a book and backs away just as the girl’s head turns, revealing itself to be robotic figure, called a “spoonhead.”

The Doctor has changed into more presentable clothes and has walked back up to the house only to hear Clara crying for help and rushes inside to find her unconscious, the pleas coming from the spoonhead. The Doctor isn’t losing her again after the time he’s spent searching for her and saves her from being completely downloaded. He brings her to her bed and finds a book she’s kept called “101 Places to See,” trying to piece together what he sees as a mystery. Just as he’s left she wakes up and looks out her window to see him keeping watch, set up with a computer, and asks him if he’s been guarding her. He tells her yes and says he won’t leave all night which she takes as an invitation to go and see him.

She, in a fantastic move, isn’t nearly as easily wooed as earlier companions. She thinks he’s a bit ridiculous, that his TARDIS is a snog box and tells him there is a possibility of being too keen. He’s so flustered by her as she consistently antagonizing him that he almost misses something crucial. She makes a joke about Twitter and he tells her that while she was downloaded she must have brought something back with her, infinite knowledge about computers that she never had before. This is when they realize they’re being watched, the Wi-Fi baddies none too pleased that she got away in the first place.

He tells her that they need to run but she isn’t giving in so easy, not just ready to jump into a random box with a man she has never met before. He argues with her as the city around them begins to shut down. It’s only when they realize there’s a plane crashing towards them that he finally hauls her into the TARDIS himself.

The sequence with The Doctor dismissively assuring her that yes, it’s bigger in the inside, yes he’s an alien and this is a time machine, is charming in its brevity, not allowing her time to be instantly charmed. They crash land onto the moving plane and bum rush the pilot’s quarters.

They grab hold of the steering wheel as the pilots lay unconscious and manage to miraculously steer the plane to safety, just as the pilots wake up. They’re back in the TARDIS in a flash, ending up somewhere the next day in London.

The Doctor pulls out a motorbike, leaving almost no room for explanation, and the duo are off, riding through the streets in a wonderfully shot sequence that made the show seem classic and modernized simultaneously, magically infusing everything about the show that makes it addicting. From the moment they stepped into the TARDIS to when they sat down for breakfast it was the fast-paced mania that made episodes such as season five premiere “The Eleventh Hour” such a treat to watch. It’s inherently entertaining and while we knew they weren’t actually going to get caught, that the plane wasn’t going to actually crash, it was nice to see a fire lit under them as if those were real possibilities.

They sit down for breakfast and each tries to assess the other. The Doctor wants to know why she’s a nanny; she wants to know why they only traveled a day in time if he has the most powerful time machine/weapon in the universe. He tells her it’s so the head honchos will be tired of searching for them, and she doesn’t answer. She tells him to go get them coffee as she figures everything out with her new intelligence.

He grumbles a bit but goes anyway only to realize they’re being watched by the baddies in question. They tell him that there is no way of escaping, that they’re everywhere and will find her. He tells them that she and the earth are under his protection. It’s eerie and works well, until robo Doctor comes out to play. Clara has shut down almost all of the webcams in the area and is throwing the behind the scenes people for a loop after figuring out their location just as the “Doctor” comes out. She realizes something’s amiss too late just as he turns his head, sucking the soul out of her.

The Doctor doesn’t take kindly to this. And here is where the plot falls apart.

We see the Doctor speed through the streets of London and up the side of the building in what’s called his anti-gravity utility, and into the office of the woman in charge. She threatens him until she realizes it’s the spoonhead version of the Doctor, with the real one back at the café controlling him. It’s a bit of an easy fix, such as the “The Power of Three” episode but like in that one, it’s the ending that truly matters. Everything is righted and the Doctor shows up outside of Clara’s workplace again. He tells her she could have as many adventures as she wanted and she tells him that she still has all of the time in the world. But, she tells him, come back tomorrow and maybe she’ll say yes. They have a wonderful rapport that I can’t wait to see explored.

The highlight and the success of the episode was largely due to the charm and spark of Jenna Louise-Coleman, introduced for a third time, and the way that her energy reinvigorated Matt Smith who for the first time in a few episodes seems to be going above and beyond just phoning it in. In fact, everything about the show—aside from the writing—seems to have gotten a bit of a facelift. The inside of the TARDIS is new, presenting a cooler interior rather than the warmth it used to exude. The Doctor’s clothing is different, settling for a longer jacket rather than the usual short cut tweed, and the opening title credits are louder, redder and faster paced, hopefully a cue in the direction we’re headed in.

And the score must also be mentioned, it was energized with newer sounds and a youthful exuberance—it was almost my favorite thing about the episode.

Doctor Who is one of those rare shows that doesn’t actually need to be serialized to work. It thrives off of the “baddie of the week” technique. Doctor Who’s initial premise is about an alien who steals a time machine so that he can go gallivanting about the universe, discovering new planets and meeting new people and species. He’s curious and what better companion for him to re-introduce that curiosity than Clara who’s been waiting her entire life to travel? While it isn’t bad for the show to hold an underlying theme for each season, a goal for the duo to accomplish or a stake that keeps them in running, it also isn’t bad to utilize the show’s central theme and just explore. Some of the best episodes are when the team takes our characters out of Earth’s orbit and into the stars where their creativity is allowed to expand.

For the first time since some point in season six, I’m hopeful of the show’s progression into future episodes. The breakneck pacing of the story, the exuberant performances and the new and stylized atmosphere, all are promising starts to the second half of season seven. The hope is tentative as it should be with any Moffat-led show, but it’s there. Next week, we’ll meet The Doctor and Clara again for a voyage out into space; let’s hope they keep the excitement.

Also, how many references to past companions did you count?