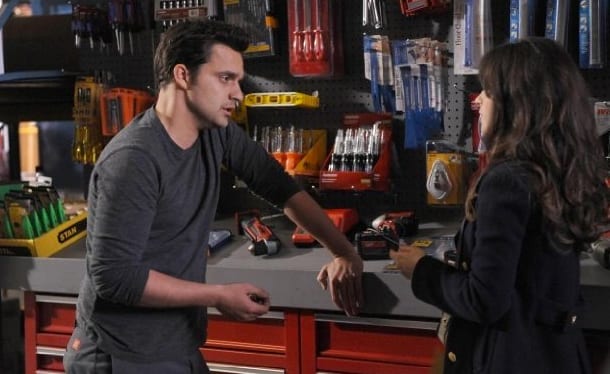 You know it’s going to be a great episode when it we get a viewer’s digression advised warning. And it was! It lived up to its expectations.

Ever since the kiss that stopped hearts and fogged windows audiences have wondered how the showrunners were going to resolve the impending Nick and Jess relationship. For how many episodes could they milk the “will they, wont they” strategy and make it work? Would they dismiss the entire storyline all together and bring it back in the third season? Was it a smart narrative move to introduce the relationship so early in a series? What everyone has been lucky to learn is to never presume to know what direction the show’s going to take because when you think it’s going to zig, it zags, and when you think Jess and Nick are going to have passionate, lust-fueled, PG-13 rated sex they end up yelling haphazardly ,only managing to rid themselves of one item of clothing, and breaking Schmidt’s new aquarium.

New Girl has done a fantastic job at exceeding expectations and it isn’t time to doubt them now.

In the opening scene we’re with the group out at Nick’s bar and Schmidt is mourning Cece’s recent engagement and drinking little-to-no proof alcohol and Jess is becoming aroused at Nick’s newfound leadership and ambition. He wants to throw a “guys night” at the bar to gain more customers and wants to be a better bartender, such as not giving his friends free drinks.

She tells Cece as much the next morning, telling her that seeing him want to accomplish something made her want him bad. This is when Nick walks in excited about his new revelation that washing machines have a dispenser for soap, and his whole existence is changed. He asks Jess where the iron is and that sends her over the edge, yelling at him to get out. Confused, Nick follows her orders and walks out, leaving him iron-less and Jess more into him than ever.

At the bar, Winston and Schmidt realize that Nick’s been acting more reserved about his drink sharing than usual because his boss is not only a woman, but is also a woman he’s getting it on with. Shane, the boss, walks over to him, talks about how dirty he is, kisses him and then proceeds to walk away.

There is all you need to know about the character and all that the writers needed her to be.

It’s also the one drawback from an otherwise perfect episode.

The problem with sitcoms and will they, won’t they relationships is the number of candidates that will be trotted out to be used as foils to get character a. into character B’s pants. Or you know, make them realize each other’s true feelings.

New Girl is no different, using Shane as a necessary means to an end, with no stakes—we all know that Nick Miller has it bad for Jess—so there’s no actual three dimensional character there, only a character that barely left the story boarding process.

It’s a shame but since the rest of the half hour episode was so tight it barely caused a moment of reflection.

Schmidt is still moping around so Winston decides to take him to the Aquarium to get his mind off of it. However, Schmidt-angst is stubborn and once there he immediately zeros in on a fish that he describes eloquently as having a voluptuous body, full lips, great eyes…etc. He’s projecting his longing for Cece onto a fish and Max Greenfield plays it with such an earnest energy that a joke that already was funny on paper becomes doubly so when you realize how utterly devoid of recognition he is about the actual pressing issue.

Winston meanwhile, does get it and rushes him out before he can cause a scene.

Jess is back at the apartment when Nick walks in bragging about clean clothes, undergarments that have turned a different color, and Jess driving him to the hardware store. Jess would rather hide behind a door but decides to drive him anyway, despite her growing attraction.

I don’t know about you, but a thirty year old man just realizing how to do laundry wouldn’t be a turn on.

But this is Nick Miller who achieves the unthinkable.

And the hardware store is where any likeminded folk—or you know, twenty-one year olds with the mind of a dirty pre-pubescent—was giggling and snorting at every wonderfully timed sexual innuendo. Jess stands watching as Nick exudes manly testosterone and she has to run and stand in front of a fan to cool herself off, reminding herself that she’s seen him “pleasuring himself to a male ordered steak magazine.” Seeming to have done the trick, she turns to see him standing with a large, phallic looking item and proceeds to jump, scaring him, and causing Jess to be knocked out leaving an impressive bruise on her chin.

This scene not only made me laugh harder than I have in a while but also reminded me just how spot-on Zooey Deschanel has been this entire season. While it was sold as her show initially season one saw Max Greenfield stealing the spotlight—deservedly—and Jess taking more of a backseat, many viewers saying they were tired of her “cutesy” shtick. This season has shown a wonderful evolution for the character and Deschanel has become comfortable in the role and her delivery, as well as her physical comedy, and is hilarious.

The knockout leads to Jess being doped up on painkillers. Nick walks into her room bearing soup and apologies and as he puts the tray down, Jess tells him that she wants to sleep with him. She then grabs him, pulls him to her, talks about being Judy Garland for a bit, and eventually gives up when she smashes Nick in the face and he consequently burns his hand in her soup.

It’s never been clearer just how much Deschanel and Jake Johnson excel at physical comedy and furthermore, are better when doing it together. They’re comfortable making things appear as hilariously awkward as imaginable, and they have a great rapport that helps sell the almost manic chemistry between the pairing.

The newly enlightened Nick speaks to Winston and Schmidt the next day, telling them about how Jess has just opened a door he never even knew was there, as the two gear up in their wetsuits to go and track down fish Cece.

Just another day in the loft.

Jess walks out, still mildly out of it, and doesn’t seem to remember what happened the night before, asking Nick how she got the bruise on his cheek. She doesn’t believe him when he says she did it. They tell her not to worry about going to guy’s night at the bar and to just stay at home and rest up.

Schmidt and Winston go to the beach to look for the fish and while standing in the water achieving nothing, Winston tries to get Schmidt to open up and admit that this need to find one fish is really him masking how hurt he is that he had to see Cece get engaged to another man.

Schmidt takes selective listening to a new level, ignores what’s just been said, and sticks his face in the water thinking he’s seen the right fish but instead gets stung by a jellyfish.

They run to shore and their attempts to “fix” the burning had me laughing hard into the next scene.

At the bar things are going great—for a Nick sponsored event at least—until Jess walks in. Nick tells her she didn’t have to come but she said she wouldn’t miss it, telling him how proud she was to see him really trying to do something new and with initiative. This all goes out the window when plot device Shane walks up to Nick, slaps his butt, and tries to kiss him, throwing Jess for a loop. She runs out unsure of how to handle her feelings and Nick runs after her.

At the hospital Winston sits next to a sleeping Schmidt just as Cece walks in, lion fish in tow, hoping to wish Schmidt well. Winston however, in one of the most genuine scenes from the character, tells her she should leave before Schmidt wakes up because seeing her engaged has been killing him. She agrees, leaves the fish and walks away just as Schmidt wakes up. It’s short and sweet but gives us even more insight into characters without having to rely on overtly emotional displays of affection. Winston cares about Schmidt, Schmidt cares so much about Cece that even seeing her would hurt him, and Cece cares about Schmidt enough to avoid letting that happen. Schmidt wakes up, sees the fish, admits the ruse of hiding his Cece pain that we all saw but him, and decides to set the fish free because that’s the right thing to do.

At the apartment some of the best last five minutes of this show, in many shows this season, takes place.

Jess and Nick are arguing as per usual and Nick brings up her drug-fueled revelation from the night before and she denies it at first until Nick asks her flat out, does she want to sleep with him?

Yes, she says, then no, then yes again. She tells him that seeing him being aggressive about getting things he wants has been a massive turn-on and he calls her a gold digger and they fight again, Jess telling Nick in one of the funnier lines that if she was a gold digger for him she would be the worst gold digger on the planet.

And then they kiss. And they argue some more and Jess shouts for him to kiss her like a man and I’m shushing my roommate so I can watch with my full attention because I’m so invested in writing good reviews, and right when the audience believes that they’re finally going to do the deed, they break the small aquarium Schmidt has bought earlier in the episode.

They stop. Audiences yell in protest.

They run away from the scene of the crime and into their separate bedrooms and as the doors slam simultaneously you think the scene is done and the show has copped out of a serious scene until the two rush back out for one last passionate kiss before parting ways again, with more doors slammed.

What a fantastic episode. It fulfilled its need to somehow wrap up a part of the Jess/Nick pairing storyline and managed to be one of the most consistently funny episodes of the show, keeping me laughing for almost the entirety of the episode.

The show even managed to squeeze in one last gag as Schmidt tries to throw Cece’s gift fish back into the ocean, but instead allows it to slip backwards through his fingers.

So are we all on board yet with the Jess and Nick pairing? How do we think the last couple episodes of the season are going to play out? With the way the shows been going, it should be wonderful.