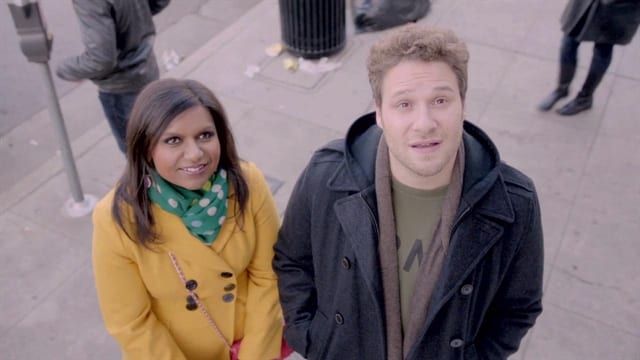 Now that they’ve started spacing them out a bit, I find I enjoy the Mindy’s-guest-star-boyfriend-of-the-week episodes more. This week featured Seth Rogen as Sam, Mindy’s Jewish sleep-away camp lost love who returns to New York for a day between army deployments. The problem with having a pretty recognizable person like Seth Rogen guest star, though, is that any secondary plot going on ends up falling by the wayside, exactly as it did tonight.

“The One That Got Away” starts with the typical Mindy voiceover about romantic comedies. This week, it’s an explanation of why she likes them: because no matter the circumstances, the right two people can still end up together. It’s all layered over actual footage of Tom Hanks professing his love to Meg Ryan before Mindy announces to the office that she’s reconnecting with someone from her past today.

Everyone’s intrigued but Danny, per usual, and Mindy treats them (and us) to a flashback of the time she went to Jewish sleep-away camp when she was thirteen. She stuck out like a sore thumb, but this kid Sam (who grows up to be Seth Rogen) is actually nice to her and they have a good summer together before they go their separate ways. Poor Betsey can’t seem to comprehend not being able to stay in touch via email or Facebook and that conversation almost strays into Mindy’s age territory, though it’s thankfully cut short by Sam’s arrival at the office. The whole age sensitivity thing is one of those female tropes of the romantic comedy variety that I just don’t even want to deal with. Maybe when I’m actually one of those people who start celebrating the anniversary of their 39th birthday or whatever I’ll finally get it, but for now I’m just glad they didn’t drag that issue out.

Anyway, the initial greeting between Sam and Mindy is awkward all around, with him making some strange attempt at a joke about being blind and her asking if he got his army shirt at Urban Outfitters when he really got it, you know, being in the army. For reconnecting with him via Facebook, Mindy sure didn’t do her online pre-date stalking very well. They have a cute coffee date and not-so-subtly ask each other about their relationship status and surprise, they’re both single.

In the aforementioned barely-dealt-with subplot, Danny is consulting with a couple who is looking into sperm donation. In a twist that I’m assuming is highly inappropriate, they ask Danny himself to be their sperm donor. He seems as thrown as I am, though he ends up agreeing after the couple butters him up with some flattery. Danny, just because you aren’t nice enough to people for them to compliment you doesn’t mean you should agree to let the rare people who do it have your genetic material all willy-nilly.

Meanwhile, Mindy and Sam go to the drugstore and have the fight that everyone has with the self-checkout machine, which is actually very entertaining to watch happen to someone else. Especially when those someone elses have the good comedic timing that Mindy and Seth do. When she invites him to go see the mummy museum at the Met with her after they narrowly escape shoplifting charges, Sam reveals that he’s actually being deployed again tomorrow. That sucks for all of us, because Mindy hasn’t had onscreen chemistry this good with a guest star in a while.

After she attempts to ditch on the rest of her day with Sam because he’s just going to leave, everyone at the office talks her into finding him again to spend the rest of the day being all romantic with him before he’s deployed. She gives in because she’s still that hopeless romantic at heart, and finds him at a tattoo parlor in the Village. He gets up and leaves with her with ¾ of an “army” tattoo, which I love because in real life, you can’t just do the dramatic movie walk away from every situation. Sometimes you’re in the middle of things, just like sometimes you have to actually say who you are on the phone. I really enjoy that the show keeps poking fun at little rom-com tropes like that even while dealing with bigger overarching ones.

Mindy and Sam end up catching a Nora Ephron double feature with both of the Tom Hanks/Meg Ryan movies that I can never actually keep straight. After Mindy sees Sam interact with a Vietnam veteran on the subway and talk about his own deployment, it’s straight to her bedroom for what everyone already assumed was going to happen with Sam leaving the next day. They’re cute together afterwards, getting along easily and cracking jokes and probably driving the Mindy/Danny shippers crazy. It goes downhill after Sam agrees to fix her air conditioner and falls out the window. He’s intelligent enough to be trusted with heavy duty weaponry, but he can’t figure out that when one clambers out a window with no support, one generally hits the ground hard.

Apparently he’s barely injured, so Mindy’s wait in the hospital reception area isn’t terribly stressful. She does run into Danny, however, who is completely freaking out about the whole sperm donor thing. The rest of the office got into his head about it earlier with Morgan congratulating him on fatherhood and Betsey wondering what would happen if his kid showed up at his door years down the road wanting to meet him. Now he’s seeking Mindy’s advice, and she gives him a good answer: it’s a huge decision, and just because he already agreed doesn’t mean he can’t reconsider.

To help, Mindy goes to dinner with Danny and the couple in question and goes on and on about Danny’s faults. All around this dinner scene strikes me as bizarre. Even just logistically speaking, it’s weird. Did he already have these dinner plans or did he call them up out of the blue? And how long was this dinner that Mindy could go and come back in time for Sam to still be in the examining room? This kind of stuff doesn’t matter much in the grand scheme of things, but Danny’s resolution does, and it comes about as quickly as the couple’s question to him. They listen to Mindy talk about Danny being sweaty and angry and scared of Game of Thrones and just like that, they’re no longer interested. Considering how big a decision it is to even ask someone for their sperm (I assume, at least) it seems odd that they’d change their minds so quickly, but oh well. And that’s it, that’s how Danny’s crisis of masculinity and fatherhood gets presented and resolved. Maybe they’ll touch on the issue again in future episodes, but for tonight, it just seems like a rushed, lost chance at character development.

Sam ends up with only a sprain, so he won’t be getting detained from deployment, much to Mindy’s dismay. Morgan tries to help her figure out a way to keep Sam here, but they barely get a chance to start scheming when Sam interrupts to say that he actually wants to go back now because he enjoys what he does. Mindy is disappointed, and has to rush off to perform an emergency procedure.

While she’s off being an awesome doctor, Sam writes her a letter from the hospital lounge and has Danny give it to her when she’s done. And then just like that, Sam is gone on his 18-month deployment, allowing ample time to figure out Seth Rogen’s schedule if they ever want to bring him back again. The letter turns out to be pretty sweet after the first few lines thanking Mindy for the sex; Sam watched her in the surgery room for a bit and he could tell she was doing what she really wants to do, and he just wanted her to know that’s what he was leaving to do. He closes on a quote from You’ve Got Mail, and Mindy flashes back to leaving summer camp, and it’s all wrapped up with a nice neat bow. Danny even genuinely asks if she’s alright before reading her the vending machine selections as the credits roll, so maybe he did get a little growth out of that hot minute of a plotline after all.

While I hope Seth Rogen returns someday because he worked so well with Mindy, I don’t think we’ll see Sam again. Mindy’s grown beyond her thirteen year-old self, and now that she’s had basically the adult equivalent of a whirlwind camp romance, it seems like that’s out of her system, which is good. I feel like she’s approaching the Mindy that she wants to be. Hooray, character development!  Overall, this was another solid, enjoyable episode. I think if the show keeps going the way it has been in this half of the season, it’ll turn out way better than I first thought after the pilot aired.

Favorite Lines From “The One That Got Away”

Danny, to Mindy: “You want to date a thirteen year-old? It could work, you like the same music.”

Morgan: “Any friend of Dr. Lahiri’s is a boss of mine!”

Mindy, to Danny: “You already call a wallet a billfold, you’re going to be a dad.”