The show opened with chaos and questions.

Then there was a flashback, followed by an old 80s movie plot line where a young, ingenious nerd beats a video game that the government set up.

Then Jack O’Neill (Richard Dean Anderson) shows up to beam the nerd aboard a spaceship. Then there’s a appearance by Dr. Daniel Jackson (Michael Shanks). The first reaction was simple: I really miss Stargate. I miss the characters I’ve become familiar with and watched struggle through every imaginable enemy

That comes to an apex when our young teen (David Blue) is beamed to a space ship called the “George Hammond” named for the late commander of the Stargate program, General George Hammond, played by the late, great Don S. Davis, who gave his last media interview to Blast before his death in 2008.

Even Gary Jones, an SG-1 series regular, makes an appearance on the two-hour opener of “Stargate Universe.” It’s a reminder that Stargate is back, but not in the way fans have known for the past decade. This is a new Stargate. It’s younger, edgier. There’s even a sex scene, which we don’t think we’ve seen in either of the previous shows or the movies. 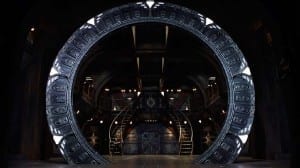 Robert Carlyle plays a brilliant yet frustrated scientist trying to solve the mystery of the Stargate’s “ninth and final” chevron. A secret off-world military base has a special stargate on it that is tapped into the planet’s core for power. It’s purpose is to dial that ninth chevron. His character, Dr. Nicholas Rush, the scientist who has endeavored for years to solve the riddle of the last Ancient stargate secret. He’s got some work to do. I’m still seeing Renard from “The World is Not Enough” at times.

When the base comes under attack by an old enemy, the Lucian Alliance, the base is forced to evacuate through the ninth chevron address, which lands them on a massive ship built by The Ancients, the old and advanced race that built the Stargate System. The ship has been traveling faster than light for hundreds of thousands of years. It’s several billion light years from Earth.

Nerd moment: There’s a little plot hole that old Stargate fans will catch. When the base is attacked, its only real defense is The Hammond, a brand new Earth ship with all kinds of amazing gear and weapons. It’s attacked by three “motherships,” an antiquated enemy vessel that the Hammond could dispatch easily with a single blast from its Asgard weaponry. But that moment is not important to the rest of the show.

The ninth chevron leads to the ancient ship, which can travel faster than light without using hyperspace technology. The life support is failing and people are injured and dying.

That completes the first hour of this two-part episode.

In the second part, the team is floating along on the ship trying to get things in order, doing the usual sci-fi stuff. 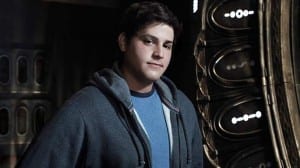 David Blue plays the math whiz, Eli Wallace, and he sells his part well like a television Jonah Hill.

The producers know that they have to do a lot to make us fall in love with these brand new characters, and halfway through the second part, they come as close as I would have thought possible. A gut-wrenching scene of self-sacrifice involving one of the main character’s fathers draws the viewer into the show.

There’s conflict. Much like the first few episodes of Stargate Atlantis, there are scientists and soldiers and even some politicians jockeying for position, trying to figure out who knows best. Meanwhile, the ship is dangerously high on carbon dioxide.

The show has all the elements to get us interested and leave us wanting more. There’s even a mini cliffhanger ending where we learn that the ship’s autopilot brings it to a planet every so often. 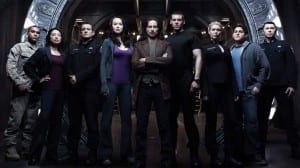 But the 80 minutes of footage in the first two parts of the opening episode was either poorly edited or made to purposefully leave plot holes. At some point, Dr. Rush uses an ancient (and reusable) communications device to contact Earth, but no footage of his contact with Earth is shown, and the team inexplicably never uses the device again. I guess they have to be able to contact Earth sometimes, and that does leave open the possibility of cameos from old SG-1 and Atlantis characters, but it’s a bit gaping. We’re pretty sure this gets closed up in the third part of “Air” which airs next Friday.

The big issue is that one or two of the characters need to separate themselves. They need to stand out in the way Sheppard and McKay did on Atlantis. I didn’t quite get a feeling for who would take the lead here, though it’s possible that Blue will stand out, while Brian J. Smith, who plays the number two military guy, Lt. Scott, has potential. But Sheppard and McKay stuck out from the first few minutes of “Atlantis.” Not so in “Universe.”

Next week will be big in terms of the show’s success or failure. The season is tentatively scheduled for 20 episodes, and we’ll have to see what happens. Right now I’m left wanting more, but I’m not sure why.