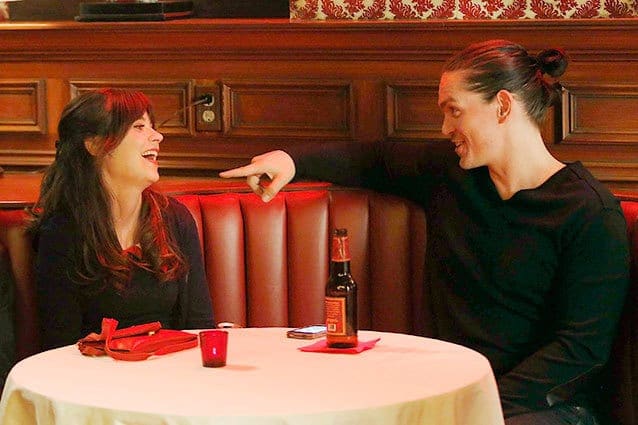 Due to ABC deciding the best course of action for stumbling show Happy Endings was to put in the most absurd schedule possible (back to back episodes on Friday nights) it’s been decided best to drop that show from the review cycle. However, the positive is that I now have the time to review New Girl, which you may have heard is having an absolutely stellar season.

Nearing the end of its second season, the show has seen a consistent stream of top notch episodes that allow for strong character development, comedic moments that have keep it the one show I will always laugh out loud at, and reasons for fans to tune in each week.

This week shows the dwindling down from Jess and Nick’s kiss plotline, Schmidt and Nick’s ten year anniversary, and Winston bringing in Jax, a football player he interviewed at his job and Jess’s attempts to woo him long enough to get her previous kiss out of her head.

The open begins like it so often does, with the roommates in their loft. Schmidt and Nick talk about how it is their ten year anniversary of living together in a platonic relationship. They plan to throw a garden party for the event.

Jess tells Cece of these plans and she wonders aloud how they’re friends with these people. Jess tells her that technically the last person she kissed was Nick and she desperately needs to get another mouth on her mouth to erase the memory of the last one.

This is how she finds herself in a bar trying to pick up men and runs into many, but none of which that fit her “manly man” quota who are also emotionally available. She sees Nick and how he is and wants the exact opposite. She’s just about given up and is moping at the bar with Schmidt and Nick when Winston walks in with Jax (Steven Howey from Shameless) a tall, muscular football player that she immediately sets her eyes on. Winston is against this since he wants Jax to himself as a friend and doesn’t want Jess to ruin it. She hops over to his table regardless and begins flirting away.

Nick tries to convince Schmidt to let him have a hand in planning their party and Schmidt reluctantly gives him the job of balloons and port-a-potties and instantly Nick cripples under the responsibility of it all, but decides to try to do it anyway.

Cece’s dud of a date is back and tells her that their mothers have talked and given him a go-ahead so they’re approved to go and get married. Put off by the lack of romance in the proposal, Cece brushes it off.

We next seem them all at the Tinfinity party and Winston tells Jess to back off of Jax, telling her she has no chance with him since she knows nothing about sports. She disagrees and tells him that she does though have her eyes, her hair, her legs, her boobs and adorable personality and walks off to find him. This, might I add, is a clear sign of how far the show has come. In the beginning stages, Jess would have never felt comfortable enough going up to a man just for the sole purpose od some face time and now she’s self-assured in herself and this version is so highly preferable.

Nick has, as predicted, failed at his tasks and decided to buy an old and rusty portable toilet rather than spend some money on rentals and Schmidt tells him it’s no problem since he had a back up just in case.

This puts Nick out and he tries for the remainder of the time to convince people to use his port-a-potty instead.

Jax and Jess have enjoyed some flirting until he freaks her out with his emotions, already attached to her as he begins to cry and tell her that he really likes her. She walks away, uncomfortable.

It’s toast time and Schmidt tells Nick he wrote his already. Nick, fed up, asks him why he always thinks he’s better than him? Schmidt gets uncomfortable and they talk for a moment before all of a sudden the stage has been hijacked by Cece’s dud of a boyfriend. Schmidt angrily gets up to confront him before he realizes what’s going on. Cece is being proposed to onstage and Cece says yes because this time it’s romantic and spontaneous and it works. Heartbroken, he walks away and Nick catches up to him. Schmidt says that it’s just really hard when things don’t go your way. He’s trying to be flippant but the real meaning comes out.

Jax jumps to the stage next to profess his love to Jess and while it’s funny, it’s very obvious that it was supposed to be funny. We could see the punch line coming and Zooey Deschanel was funnier in her awkward reactions and running away than the actual butt of the joke was. Steve Howey is wonderful on Shameless as Kevin and he was fine here but it was a role that could have been written better rather than just a throw away, another obstacle in the way of Jess and Nick’s relationship.

Nick and Schmidt end up in the hot air balloon, which the former had rented without the actual gas to get them into the sky and Winston and Jess soon find them as well and they sit and drink. Sure, it might be a weird group of friends that on paper doesn’t make much sense, but seeing them interact clarifies it. These are well developed characters—despite Winston still deserving more attention—who we all care about and enjoy watching each week.

The main reason that this episode succeeded was because of the focus on the relationship between Nick and Schmidt with an emphasis on the latter.

Schmidt works so well, and I’m glad because of it, due to show’s objective to not turn him into the next Barney Stinson- a character who for the first few seasons was the comic relief guy until they decided they wanted him to be vulnerable and have heavy storylines too and re-wrote most of the backstory. For a moment at the beginning of season two I feared they’d lost focus on the character and had allowed him to stray into caricature territory, but they quickly remedied that problem. The show allows for the entire cast to deliver the laughs, rather than relying on one character’s popularity to get them by. It’s why this week’s episode allowed for such a strong performance by Max Greenfield. He got to be funny, but not in an obnoxious beat-for-beat joke style, but rather he was funny because of the way the character has been written and the reliance on the character’s quirks to shine through. He’s ridiculous and overly articulate and gets angry about a florist’s wrongdoing and it makes viewers laugh because it’s so in character. Which is why when he watches as Cece gets engaged to another man it’s made all the more effective to see his face shut down, and Max Greenfield is absolutely wonderful here, because it’s believable. It isn’t just a funny character playing sad for one episode. It’s an actual, realistic reaction. Cece is his soft spot. .

Schmidt and Nick’s relationship has always relied heavily on the “odd couple” syndrome appeal. Schmidt is rigid and obsessive compulsive while Nick is a slob and emotionally unavailable. They make for an interesting duo comedically and otherwise, their differences allowing for a fun give-and-take between the two. However, what’s often been discussed and just about finally comes to a head in this week’s episode is why exactly are they friends? It’s been established that they met in college and just couldn’t shake each other, but does longevity translate well into real friendship? We’re constantly seeing Nick annoyed or embarrassed with what Schmidt’s up to and we see that Schmidt tends to show more affection to Nick despite the ill treatment he may receive. It’s what makes the exchange where Nick asks why Schmidt thinks he’s better than him work so well because despite Schmidt being dubious of Nick’s survival skills and jokes about employment, his ego has never gone farther than a shallow base level.

So when Schmidt sees Cece get engaged and walks away from things he isn’t willing to face and Nick follows, in the same boat, and it’s made more clear why they’re friends; it’s the unspoken moments that mean the most in long lasting friendships and the low maintenance required. Sure, they may fight and disagree with almost everything the other says, but there’s an unspoken understanding and the quiet comfort that a friend who gets it. Max Greenfield and Jake Johnson work wonderfully together in this scene, allowing for a genuinely touching moment for the two.

Some big moments are sure to happen in the last few episodes of the season. Will Jess and Nick actually get together or was Jess running away from him and having to deal with those feelings at the end of the episode a signal of what’s to come? Do we want them to get together by the end of the season? Will Cece follow through with the wedding plans or will her connection to Schmidt overwhelm her need for marriage? Will Winston get a good storyline? Will any big emotional moments come out of nowhere? Who knows, but be excited because this is a great show to be able to watch each week.