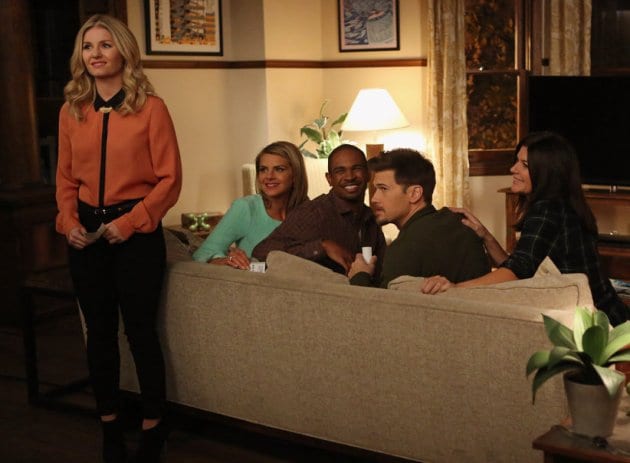 I don’t if you noticed, and won’t be surprised if you didn’t, but ABC’s most recent gimmick in promoting Happy Endings is to have it air two NEW episodes back to back.

Other than the day I spent marathoning season one, I don’t think I, as a huge and dedicated fan,would choose to watch this group of people for an entire hour.

But what’s done it done. For now at least.

Shall we press on to the first episode of the night?

What happens when character development and pop-culture references fail? Showrunner David Caspe decides to go for the pratfalls, explosions and literal buckets of slime. See what you did ABC? Cleverness and witty dialogue substituted for cheap gags.

At least that’s what half of the episode wants the audience to believe because out of nowhere it knocks a viewer back with some actual emotional punch. As one who’ll willingly climb into the ring to fight in defense of this show and its quality, I didn’t see a heartfelt moment as a plausible development. Lo and behold, I was wrong.

The episode begins with Dave having come up with an expertly crafted prank to make Max believe that he’s won the lottery. Max falls for it and ends up yelling that he doesn’t need them anymore, tearing his shirt off and directing a not-so-nice expletive at each of the members of the group. Just as he’s about to leave Dave breaks the news to him that he had just been pranked. A Max who is both furious and humiliated is a dangerous combination and he threatens to seek revenge on each and every one of them.

Sadly, his revenge plots aren’t nearly as complicated or well thought-out, but they still manage to drive Alex to a near psychotic break, with Elisha Cuthbert proving once again why she’s the MVP of the show. After seeing Brad get covered by stripper glitter, Jane receives an exploding breakfast to the face, and narrowly misses being attacked by a paintball gun disguised as a basket of muffins (I’m certain there is some innuendo to be derived from that scene) she goes to him in hysterics. She tells him that she will help him play the rest of their friends as long as he promises to not prank her.

The subplot of the episode is more along the lines of distracting, but it allows for some sort of character growth as Brad begins to look for a new job. The drama of their plot centers on the name of his new job which Jane mocks and finds ridiculous until she realizes how serious Brad is about it. It’s nice when onscreen couples bicker and then resolve the problem since that is in fact something that happens in real life, however, it would be nice for there to be less malice in their comments towards each other.

In one of the more touching moments of the episode Penny arrives at Max’s in a large wedding gown, which on its own is a hilarious sight. She tells him that Pete proposed to her, but she came over to make Max feel bad for the prank. Max, meanwhile, is freaking out like the best bud he is, telling her how excited he is, jumping up and down and congratulating her. It’s then that she realizes what’s happened. The proposal wasn’t an elaborate prank but real, and the real prank happens moments later when a bucket of bright green slime is dumped all over her.

Let’s ignore the easy laugh for a second and concentrate on the genuine moment of friendship we were privy to. Max and Penny, despite the pile-on jokes they take in part of to make fun of one another, are supposed to be friends and how does a friend react when the other has exciting news? Excited! A friend will act as if the news is also for them, happy and wanting to know all of the details of said event and that’s what Max does, in such an enthusiastic way that for a moment it almost feels out of character but it’s not. We’ve seen moments of friendship on the show before they’re just so far and few between that it’s easy to forget they’ve happened. This scene allowed some wonderful work from Adam Pally and Casey Wilson, two actors who can often be misused on this show, and it’s a lovely moment for the characters.

Alex and Max come up with the ultimate prank which is to fake Max’s death in a limo crash—falling along the more vindictive lines of the prank Dave pulled on Max.

However, once Dave reacts to the prank Alex comes out as the real mastermind and tells them that she’s been the one behind the entire thing and she played them all.

Reminding audiences that while she plays the ditz it doesn’t mean that that’s all she is.

More importantly though is the proposal scene between Pete and Penny that could only occur on Happy Endings and is still special for them. Sure, it’s absolutely erratic in tone, absurd in visuals and just as ridiculous as they’ve ever been; Penny’s being proposed to while standing in the middle of a dirty street, big wedding dress covered in slime with a limo catching fire in the background and spouting popcorn. Yet, despite this entire spectacle it’s a sincere scene that plays to the emotions of the viewers. Penny, the lonely hearts club leader Penny, is happy! She’s no longer fighting her single status and is engaged to a guy she loves.

Who would have thought an episode of Happy Endings would end on such a sentimental note?

Shallow critic alert: is it worth noting just how attractive this cast has looked in the past two episodes? Amping it up to draw in more casual viewers, I see.

Let me begin this portion by admitting to complaining about the show’s baffling trend of having the personality traits established in season one define the characters two seasons later. With tonight’s episode, I have a question. Does Penny’s engagement, as the pure happiness that ensues, count as character growth or simply a plot development masking as such?

It depends solely on how the writers carry it out because honestly, I was frightened throughout the entire thirty minutes that somehow Caspe and co. were going to sabotage Penny’s newfound confidence.

I was luckily allowed to breathe a sigh of relief when they let her keep her childhood dream.

This was a good, solid episode. It didn’t pack as many laughs as others have, but it didn’t derail the show like previous weeks’ episodes have threatened to. Like it or not, this isn’t the show I heralded as being the best of its kind in the past. It’s lazier and lost some spark, but in episodes like tonight’s it proves to still have some tricks up its sleeves.

The hilarity tonight begins when Penny realizes at her engagement party that she forgot to invite the actual fiancé. Which I might add, isn’t too much of a bust considering the actor has an embarrassing lack of charisma next to the rest of the stellar cast.

This mistake is called to the forefront when Jane tells her that her present to her is herself. She’s appointed herself to be the wedding planner in possibly the most frightening manner possible. (Think of a Jack in the Box but with her face glued on the doll that pops out.)

Once the fiancé in question arrives he drops the bomb to Penny that he never really wanted a real wedding and that he thought it would be sweet to just elope. Penny passes out and Dave, a bride/groomzilla, scoffs completely affronted with the idea.

Jane who is naturally unwilling to take no for an answer, drags the gang and an unassuming Pete to a bridal convention where she pairs the group off as couples to get discounts. Alex and Dave are paired, obviously, and to Alex’s annoyance since she doesn’t want to be stuck with the groomzilla all day.

David Caspe, I know you like your characters snarky and often questionably likeable, but please remember that the couple dating should at least be written in a way that will make audiences believe they want to be together.

The other more believable couple: Brad and Max because Jane’s going VIP as a wedding planner. Let’s be real, if Jane and Brad weren’t in fact the best couple on TV right now (that is until a certain SPOILERS couple on New Girl easily steals that title), you’d all be rooting for a Brad and Max pairing.

Dave goes throughout the convention trying to convince Alex that he’s totally chill with whatever suggestion she tosses out, even if it’s underwater marriage. Finally convinced that he’s no longer highstrung she lets it go, until he flips out on her love for beige napkins, telling her it’s the equivalent to giving the middle finger to all of their guests.

Sincere shock moment: Dave is my favorite character of the episode.

Next up is Jane and Penny who are doing everything they can to sell Pete on the idea of a wedding. They bring out the big guns: Chicken wings with blue cheese dipping sauce instead of a wedding cake, Reggae music instead of the typical DJ or classical tunes, a sushi platter on a naked girl for dinner. Still, Pete is unconvinced and believes that weddings turns everyone crazy and all that should matter is the two of them, standing on a beach somewhere and professing their love.

Only moments later is he proven correct when Jane brawls with another wedding planner and Dave and Alex storm by arguing.

Over in Brad and Max world everything is going swimmingly until Max gets checked out. Max wants Brad to fake break up with him. but Brad wants the couples deals so Max does it instead, creating enemies for Brad.

Brad is forced to fake apologize to his fake boyfriend in fear of getting his butt kicked. They do and it’s funny until the crowd begins to shout for a kiss. For a moment, I think the shows going to follow through with it and suddenly, the two break out into laughter and run away, keeping them wonderfully in ridiculous character.

The episode is resolved with every couple happy. Pete only wants what Penny wants, which is a wedding. Dave promises Alex that whatever the future holds for them, they’ll do it together, and Jane gets rolled out a stretcher.

Fitting for them all.

And, it’s only now that I’m realizing that the shows planned it out so that it could potentially keep its trend of wedding episodes. Look, my show can still be smart!

These were two well-formed episodes of the show. They weren’t always laugh-out- loud funny, but they did something that they haven’t managed to do since the middle of season two which is combine both heart and laughs and produce two episodes of television that were worthy to stay on our screens.